And the birthday celebration continued into another day…

The Brick Hotel was a Newtown Borough, PA icon for many decades but fell on bad times for a few years to the point of Gordon Ramsey of Hell’s Kitchen fame coming in and trying to resurrect it’s glory days. Didn’t happen. After Gordon’s revamp and prompted by GroupOns, we dined there on a few Saturday nights only to find it pretty much deserted of patrons. 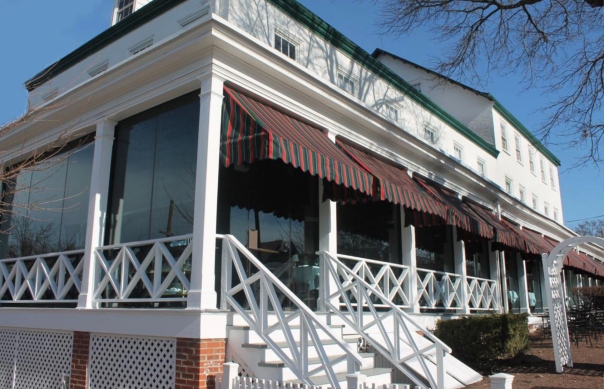 Not the case anymore. Now known mostly as a steak house, Rocco’s at The Brick, the reincarnated restaurant occupying the main floor of the historic Brick Hotel, reopened in late January, 2018. And every time we drove by it, it was packed, no matter the time of day. And no matter how far in advance we’d try, we failed to secure dinner reservations but were finally able to score for a Sunday brunch. It was to celebrate Russ and his son Dan’s mutual birthdays while Dan was in town visiting with his girlfriend Tina.

Our foursome table was positioned in the large enclosed spacious porch with floor-to-ceiling windows overlooking the outside patio and gardens. In a nod to the dual birthday celebration brunch, we ordered a carafe of Mimosas to get us started. Then we set about the task of narrowing down our choices which included the regular menu along with an additional brunch addendum, from which both Dan and Dad chose their meals.

The pace was somewhat slow because, according to our waiter Frank, the kitchen was a bit backed up. This suited us just fine because it gave us an opportunity to chat, enjoy our drinks and peruse the menus. Looking out the wall of windows, I was shocked to see a Philadelphia Trolley Car packed full of sightseers roaming the town making several trips past the restaurant. Is this a new offering in Newtown?

Up first, Tina opted for a House Special, the Filet Mignon French Dip composed of a crusty baguette packed full of moist, sliced beef tenderloin with a side of au jus and sharp cheddar fries. She managed to consume all of the crunchy fries, but had to doggie-bag half of the sandwich.

The Twin Maryland Crabcakes, also a House Special, were calling my name. They came plated over a bed of tasty remoulade with a side salad and grilled asparagus. I didn’t leave as much as a crumb. Although they were not on par with the very best crab cakes I’ve ever had (at Brian’s in Lambertville, NJ), they were certainly up there at the top of the list.

Now the guys decided on heartier fare with Russ selecting the brunch item Crab Cakes Benny. He loved the extremely thick slabs of bacon nestled between the Maryland crab cakes and two poached eggs slathered with a generous helping of hollandaise sauce.

Daniel went all out with the Kansas City Steak & Eggs entrée. The 22-ounce, medium-rare, bone-in NY Strip came topped with fried eggs and was loaded with truffled potatoes and a side of grilled asparagus. Dan managed to finish all but a few veggie spears and a bit of meat around the bone, which Russ had them bag up for a later gnaw.

Shortly before we finished eating, the skies opened up and there was an unexpected downpour which made for an interesting show as patrons ran out of the building without umbrellas trying hopelessly to dodge the raindrops. We pretty much waited for the showers to dispense before we said our goodbyes and then Dan and Tina started their journey back to Massachusetts—and us to the grocery store… We’re looking forward to one day getting a dinner reservation…