Who says clam sauce is only good for pasta? Not this buttery, corn-studded, one-pan wonder. I, personally, am not a fan of whole clams because of what I perceive as the “ya-ya” consistency, but I don’t mind them cut up in soups or appetizers. So when we came across this recipe in our latest bon appétit magazine, Russ was hoping I’d agree to placing this on a weeknight menu—he adores clams! 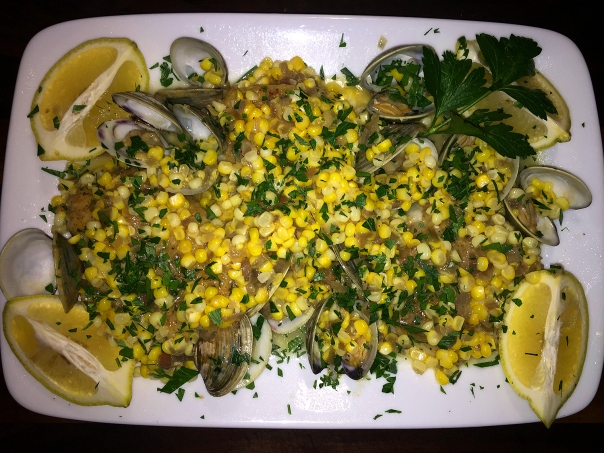 Realizing he could eat all of the clams and I’d still have cod and corn, it wasn’t hard to win me over. The original recipe said it serves four, but we were hard pressed to see how. It almost vanished between the two of us, and I didn’t even eat any of the clams—with Mr. Hubby being the sole recipient of the entire dozen! In fact, Russ thinks you should add even more…

Coating the cod with flour before cooking prevents the flaky fillets from tearing; any bits left in the pan gives body to the clam mixture. Oh, and make sure to leave the shallots in the pan after removing the clams, you want them to get happy with the buttery corn. Verdict? Two thumbs up!

NOTE: When buying a big portion of cod or other skinless fish, you’ll often end up with the skinny tail end. Keep it from overcooking by folding the tail end underneath itself to create a piece that’s closer in thickness to the rest of the fillets. Then proceed to cook it as you would any other piece.