Nachos are a quintessential party food for Superbowl Sunday—although one could probably give equal billing to hot wings and chili—but, to stay on point… Of course, this unofficial American holiday only happens once annually, but this party favorite can be served anytime of year for any number of reasons, or just because you are harboring a hankering! How about during this Sunday’s football game?

Layering is the key to loaded nacho perfection. Although I must confess I couldn’t get on board with cooking the lettuce and avocado in the layers. So these ingredients went on top AFTER the nachos were cooked. (Many of the reviewers agreed with my stance on this issue.) And the tomatoes, which were supposed to be only a topping, were assimilated into all layers. The directions below are as written in the NYTimes, but it’s up to you how to assemble the goodies.

It seemed strange to add sliced radishes, but Russ assured me that they are traditional in Mexican cooking. Since bacon doesn’t sit well with me, we eliminated it (heresy to some!) and sautéed the onion in olive oil instead. And we like the color and taste of black olives, so slices of those were incorporated into the layers. Finally, our pantry produced dried ancho chiles—but no powder—so we ground up two anchos in a mini-blender to make the powder.

Nothing less than loaded nachos will do — the cheese and chips accompanied by a fragrant meat sauce, the fire of jalapeños, the chill and silkiness of sour cream, the tart excellence of a good tomato, decent shredded lettuce, thin-sliced radishes. Here is avocado; there, the awesome funk of chopped cilantro…
~Sam Sifton, NYTimes food author

Did we like them? Mucho grande! But despite a valiant attempt we could not finish them, even though it was our main meal of the day. 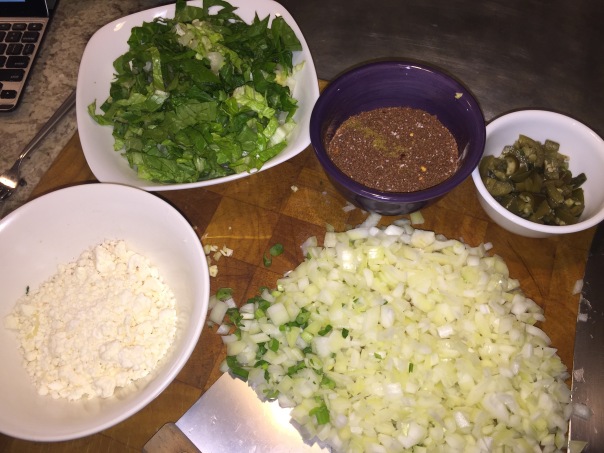 Starting to brown the meat and onions.

Combining all of the spices to add to the cooked meat. 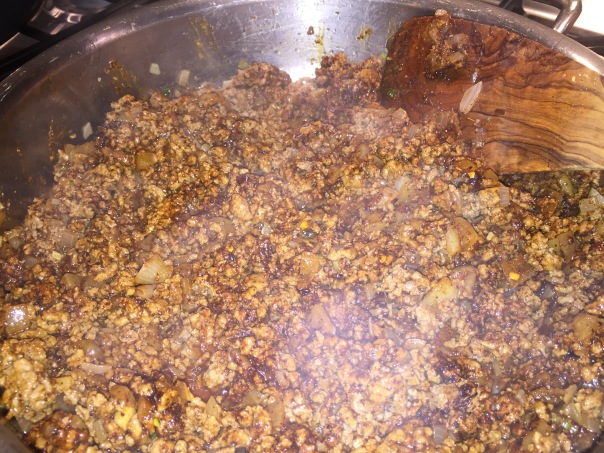 The meat mixture getting happy mixing with the spice combination.

Assembling layer one on a rimmed baking sheet.

All three layers are now complete.

The nachos fresh out of the oven before the toppings are added. 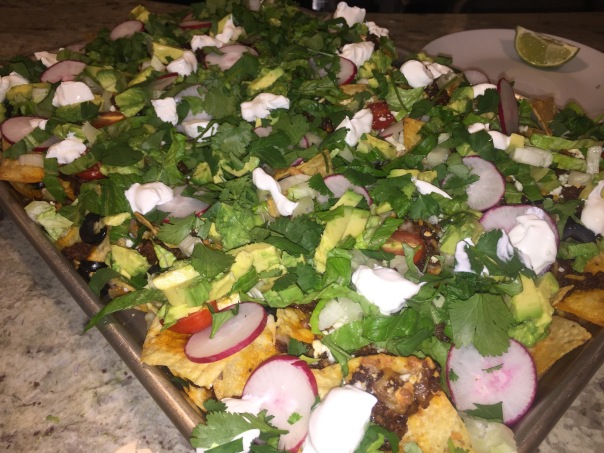 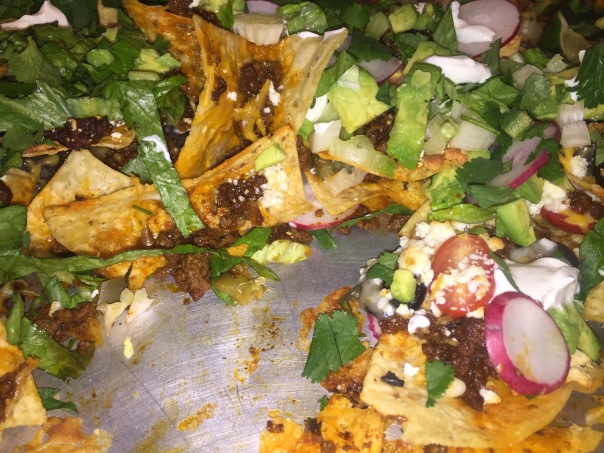 Something tells me we won’t be waiting around for the next Superbowl before we make these bad boys again!