Another “Fastest” (I use the term loosely) recipe from Milk Street Tuesday Nights, and with ingredients that speak to me, this Singapore Chili Shrimp recipe was calling my name. Psyched to be complete in 20 minutes from start to finish as per the book notation, I was totally dismayed however when it took more than an hour! Now part of that is our fault for buying jumbo shrimp with heads and shells intact (which I had to take the time and remove); but that was intentional for making future homemade shellfish stock.

Anywho, after all of the chopping and processing of most of the ingredients, I was none-too-thrilled when I realized after the liquid was drained from both batches, the rest was thrown away. This meant the dinner would consist of merely shrimp and sauce over rice with a garnish of sliced scallions—which seemed pretty paltry for 4 servings. I was convinced I wouldn’t be making this recipe again. But then I tasted it… 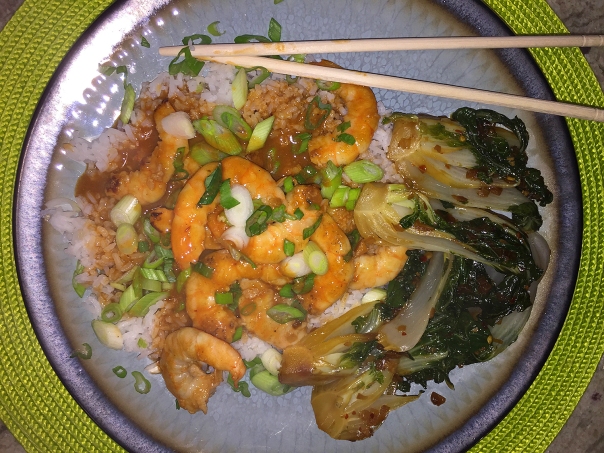 OMG, the flavors! This shrimp dish features a perfect balance of sweet, savory and spicy. I was surprised by the ketchup, but apparently it’s a standard ingredient in Singapore Chili Shrimp. To achieve a shrimp flavor that suffuses the dish, a few raw crustaceans get puréed into the sauce; giving it a rich, full-bodied consistency. Serve with steamed rice.

For a more complete meal I added a side of baby bok choy seared with shallots, garlic, soy sauce and a hint of red pepper flakes.

Don’t overcook the shrimp. Remove them from skillet as soon as they turn opaque. Even better with extra-jumbo shrimp; if you use smaller, they’ll require a shorter cooking time. (Below, I changed the number of servings and time factor to reflect our experience in making this dish.) 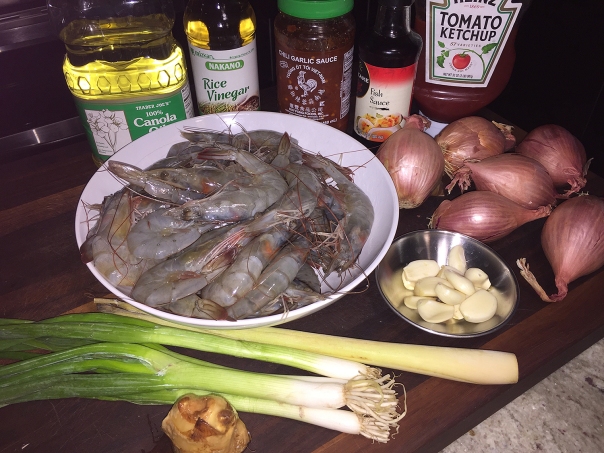