Really craving the Spring warmth to stick around for the long spell, it was shaping up to be probably one of the last cold Sundays of the season so we took “Big Red,” our large enamel coated cast-iron Le Creuset pot, for a final braising spin. And to that end, I selected a couple of recipes from Dorie Greenspan’s Around My French Table cookbook. Specifically, Dorie’s Go-To Beef Daube and Go-With-Everyting Celery Root Purée.

“We all need a great beef stew in our cooking back pocket, and this one’s mine. It’s fairly classic in its preparation — the meat is browned, then piled into a sturdy pot and slow-roasted with a lot of red wine, a splash of brandy, and some onions, garlic, carrots, and a little herb bouquet to keep it company. It finishes spoon-tender, sweet and winey through and through, and burnished the color of great-grandma’s armoire.” — Dorie Greenspan

Dorie suggests buying a whole chuck roast and cut it yourself into 2-3″ pieces so they hold their shape better than the precut stew meat. The only addition I made to the daube, was add a 14.5 oz. can of whole peeled tomatoes, that I crushed by hand and added to the pot in Step 5. Just make sure to clear your calendar for the better part of an afternoon before serving this exquisite dinner because you’ll need at least three and half hours; but Lordy, is it worth it!

If you’ve never seen a celery root before, visually they are a bit off-putting. Roughly the size of a grapefruit, they are round with a pale-yellowish brown, dense, gnarly outer skin. Celery and celery root—also known as celeriac—are basically the same plant (Apium graveolens) with celeriac being a variety cultivated for its root rather than for its stalks. They both have the taste of celery, although many people find celeriac to be earthier and more intense. Both can be used either cooked or raw, but in either case, their texture is widely different, so they are not interchangeable in most recipes.

Here, the root veggie simmers in a milk bath with a potato and onion, then gets whirred in a food processor, resulting in a smooth ivory purée with a soft, subtle, complex, and just a little surprisingly sweet flavor. It is a great substitute for mashed potatoes with more nutrients, two-thirds less calories, lower carbs and more flavor.

For serving the meal, use wide shallow bowls or small cast-iron cocottes for this stew. Spoon the daube out into the little casseroles with a generous dollop of the purée. Like all stews, this can be kept in the refrigerator for about 3 days or frozen for up to 2 months. You’ll be thrilled if there are leftovers!

Simmering in milk coaxes the very best out of celery root, giving this silky purée a flavor that’s both mellow and full. 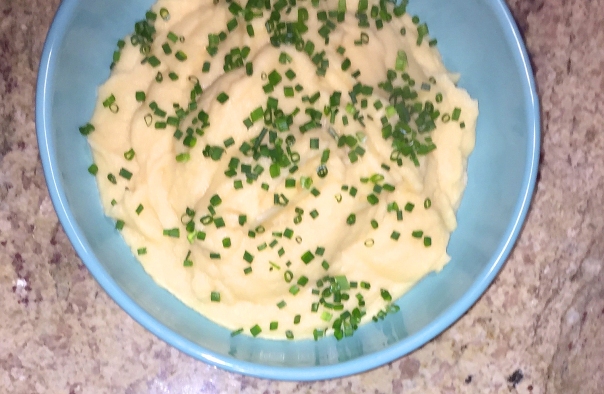 Do ahead: Celery root puree can be made 1 day ahead. Cover and chill. Rewarm in microwave before serving.

1 thought on “A Little Daube Will Do Ya”