We’ve been fans of Fine Cooking’s “Make-It-Tonite” series for a couple of years now. Their recipes generally take only 25-45 minutes to prep and cook, yet produce lots of flavor. Here, boneless chicken thighs get treated to sweet, salty, and gingery flavors. Sake, a Japanese rice wine, balances the bold flavors of garlic and soy sauce with its subtle savory-sweet notes. The smaller florets on broccolini are great for mopping up the vibrant sauce, though broccoli works well, too. 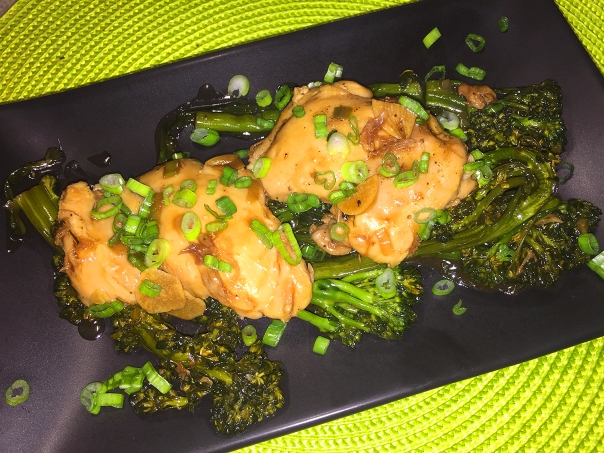 Unfortunately we were plum out of sake, so I had to make a special trip to the liquor store. Now I can say with some confidence, while I’ve imbibed in sake in the past (like my 20’s), I don’t know a heck of a lot about the different brands. So when faced with a choice, I decided to buy the small black bottle that was twice as expensive as the large cheaper stuff figuring it would be a lot smoother. I convinced myself we were worth the extra cost.

Well, I got to tell you, the meal was great! Can’t definitively say it was because of the more costly sake, but I’m sure it didn’t hurt the flavor profile. And because it tore at my heart strings to discard the ginger planks, I sliced them down and mixed it in, which added a nice bite.

Because of the sugar, the sauce got quite thick and sticky after it was reduced down. If you prefer it thinner, keep an eyeball on it while it reduces. Serve with white or brown rice. 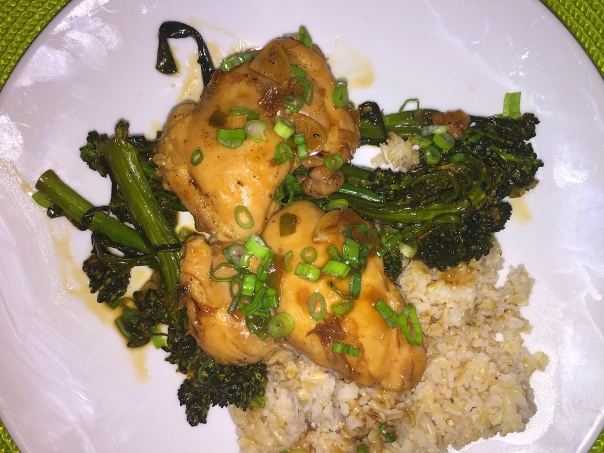 1 thought on “Sake, Garlic and Ginger Chicken with Broccolini”