Continuing on our ethnic culinary journey, this recent meal heralds from Armenia. Bone-in, blade-end pork loin chops are the best cut for this Armenian Grilled Pork with Pepper Sauce recipe because they contain a good amount of fat, which keeps the meat moist and flavorful; rib chops will work, too, but because they are leaner, it’s important not to overcook them. 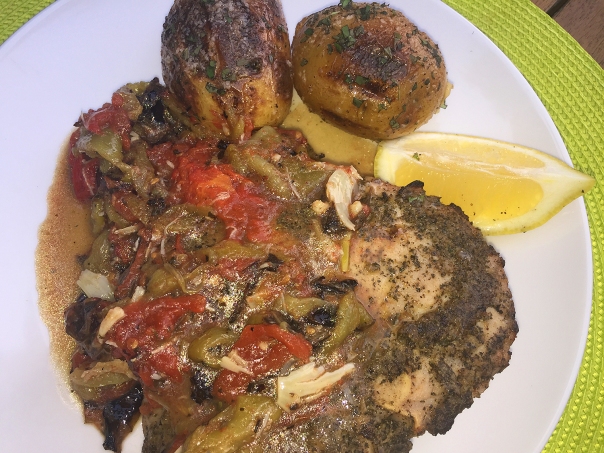 The sauce that accompanies these chops was inspired by an Armenian grilled vegetable recipe called summer khorovats. It’s excellent with any grilled pork or chicken. (You will need a disposable foil pan for cooking the vegetables.) To recreate khorovats, or Armenian barbecue, use thick-cut, bone-in pork chops, marinate them in a mix of onion and oregano, then grill them with wood chips to infuse the pork with smokiness.

Don’t soak the wood chips before wrapping them in foil. Dry chips smoke more readily, which is desirable for quick-cooking foods such as pork chops. After placing the pork on the grill, don’t open the lid for 10 minutes. This allows the smoke to collect and create a more intense smokiness in the chops.

For just the two of us, we cooked only two chops as opposed to four. But they were huge, and in my case at least, I could only eat half of it. Plus, we had hickory wood chips on hand instead of apple, which might have resulted in a slightly different flavor profile, but I doubt one that would be too discernible.

You can make the meal without the skewered potatoes, but I recommend you don’t. They are fabulous, especially when cut up and mixed with those luscious peppers and tomatoes. I’m not gonna lie to you, the meal required quite an assortment of pots, pans, trays and other cookware. But my oh my, it was Magnifico!

FOR THE PORK CHOPS:

When purchasing potatoes for this recipe, look for ones about the size of an extra-large egg (although mine were the size of eggs on steroids) and that weigh about 2 ounces each. And for even cooking, try to select potatoes of similar shape and size. The potatoes can be precooked and refrigerated up to a day in advance; just before grilling, skewer them, brush with lard/butter and season with salt and pepper.

You’ll need two to four sturdy 12- to 14-inch metal skewers; skewers with pins that are flat rather than round or square to help prevent the potatoes from spinning around, making them easier to manage on the grill. If you’re preparing this recipe to serve with Armenian-style grilled pork chops, place the skewered potatoes on the hot side of the grill after you’ve removed the chops and allow the potatoes to brown while the chops rest.

Don’t precook the potatoes at a rolling boil; this can cause the skins to split. Aim to keep the water at a gentle but constant simmer. Don’t skewer the potatoes without first chilling them in an ice bath. Chilling firms the potatoes slightly so that they cut more cleanly when scored with a paring knife.

Both recipes by Diane Unger from 177milkstreet.com