Oooo la la! We were about to embark on an interesting, eclectic culinary experience peppered with a French-American flair at Robin’s Nest in Mount Holly, NJ. This gem of a restaurant is uniquely situated in a beautifully restored Victorian building filled with antiques; and, located in the heart of downtown Mount Holly overlooking the Rancocas Creek.

It was a few weeks after the Winter holiday season had given up the ghost when we made our grand appearance with my former coworker Francis Paixao and his wife Jane. Our original date with them was to have been four weeks earlier but due to the ever-increasing demands of pre-holiday planning, they had to postpone for a month. Yet once there, the holiday decor was still ever-present, as shown below. 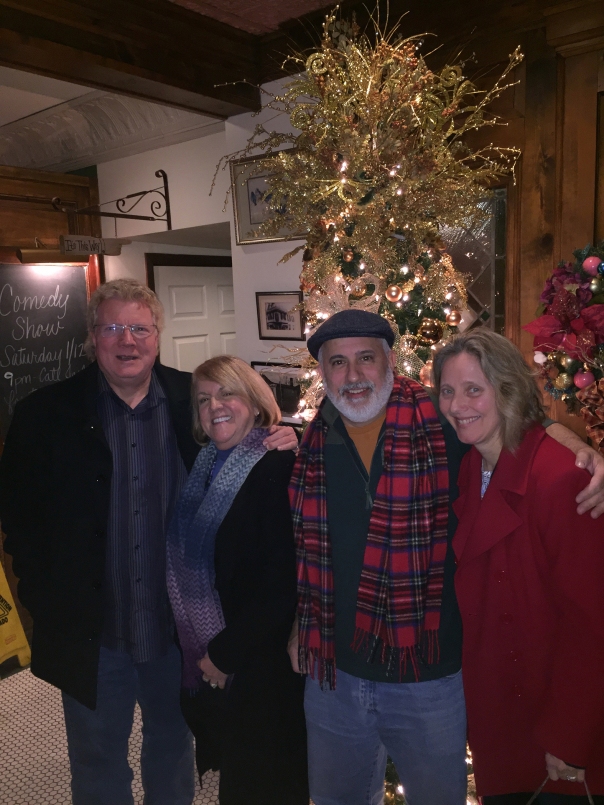 Luckily we had a reservation because the joint was hopping, as I understand is usually the case. We were shown to a cozy four-top in a quiet corner of one charming room outfitted in maroon walls and period decor. Then, in addition to the regular menu we were offered an additional list of nightly specials. 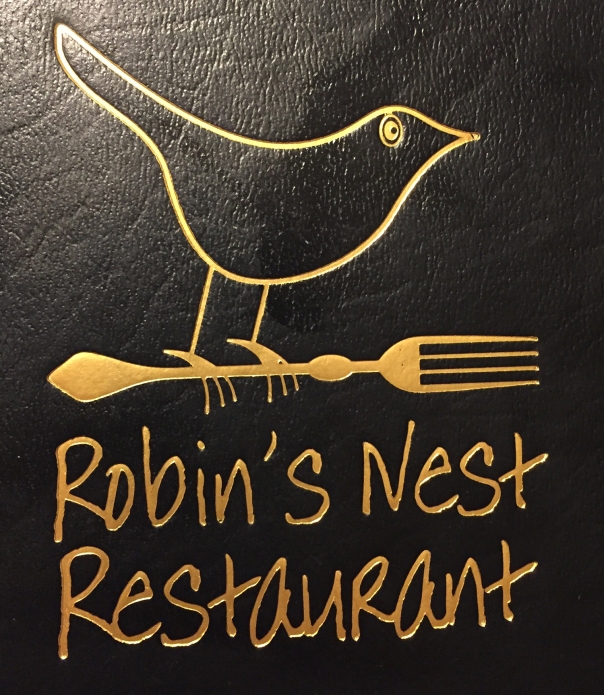 Selections are creative and delicious with Robin’s Nest offering lunch and dinner entrées that are heart friendly, vegetarian and gluten-free. 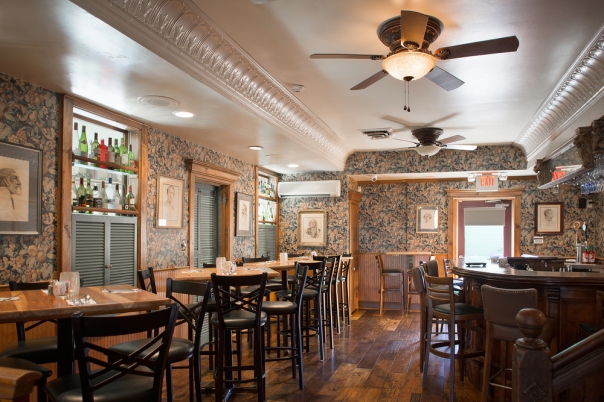 Above and below are a few stock photos showing the interior spaces sans diners. 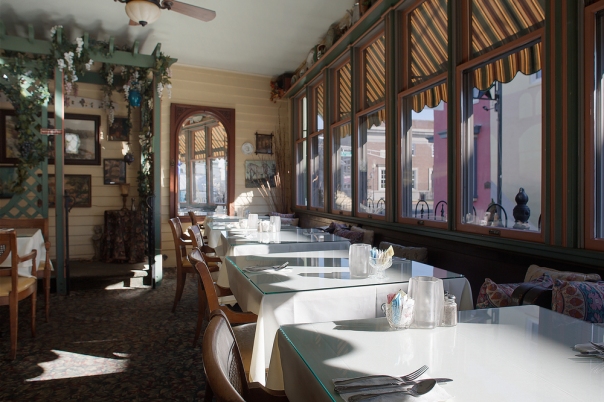 After placing drink orders, we finally settled on sharing a couple of starters. We were all intrigued by the Truffle Brussels Sprouts which came as a healthy portion of deep fried Brussels sprouts tossed in white truffle oil, sprinkled with an aged parmesan cheese and topped with crumbled crispy bacon. OMG, they were surprisingly light but packed with flavor. (Since bacon doesn’t usually agree with me, I tried to avoid most of it.) 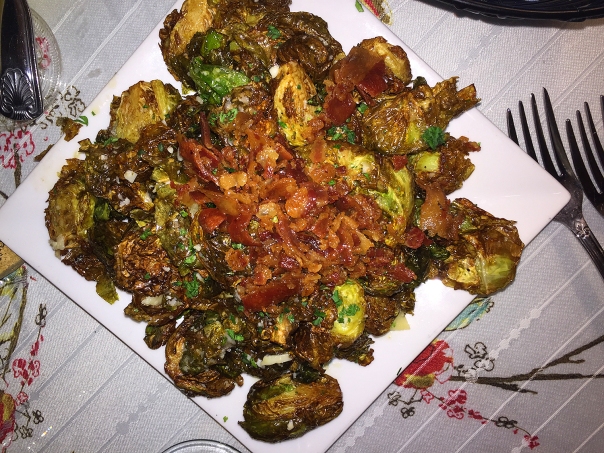 Our other appetizer was the amazingly scrumptious Butternut Squash Cakes. Comprised of roasted butternut squash with rice, and pepper jack cheese they were also deep fried to perfection over goat cheese cream sauce topped with NJ cranberry chutney and toasted pumpkin seeds. Consensus was, these were probably the favorite, although it was a close race. I almost never eat deep fried food, but neither of these options were greasy in the least. 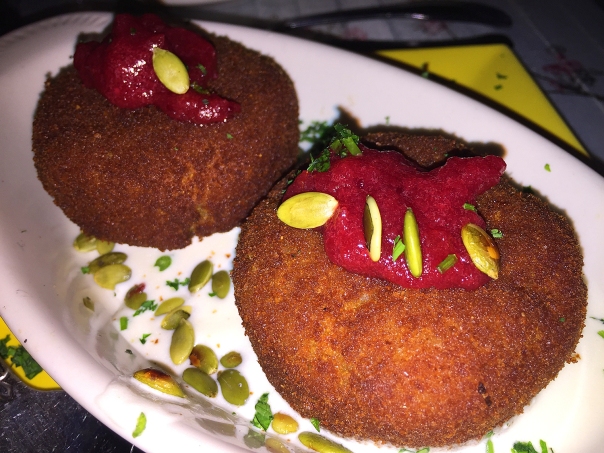 For entrées, Francis chose the Stuffed Pork Loin consisting of two lean pork loin medallions stuffed with traditional sourdough sage apple NJ cranberry stuffing wrapped in bacon, pan seared to perfection, and finished with a bourbon glaze. They were served with mashed potatoes and a vegetable medley of carrots, cauliflower, zucchini and broccoli. Did he like it? By the looks of the clean plate, I’d say the answer was an astounding yes! 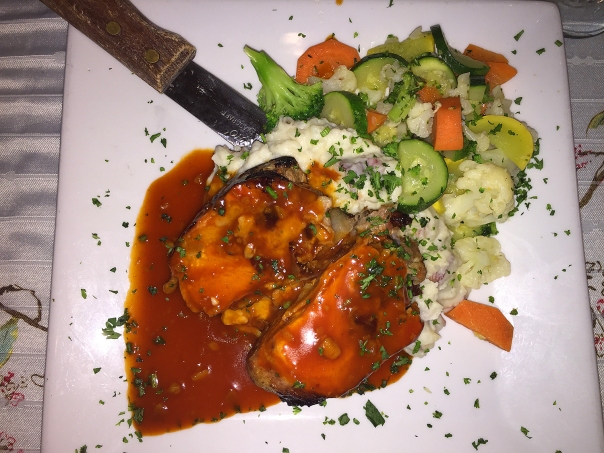 Jane and I seemed to be on the same page with our Blackened Tuna entrée. The combination of Ahi tuna, coated in cajun seasoning and sesame seeds, was pan seared to order (in our cases, medium), served with wasabi, pickled ginger, soy sauce, rice and the same aforementioned vegetable medley. Some of the accoutrements were a bit spicy for Jane who didn’t hesitate to give me her wasabi paste. Alas, we both surrendered halfway through and took home doggie bags of the leftovers. 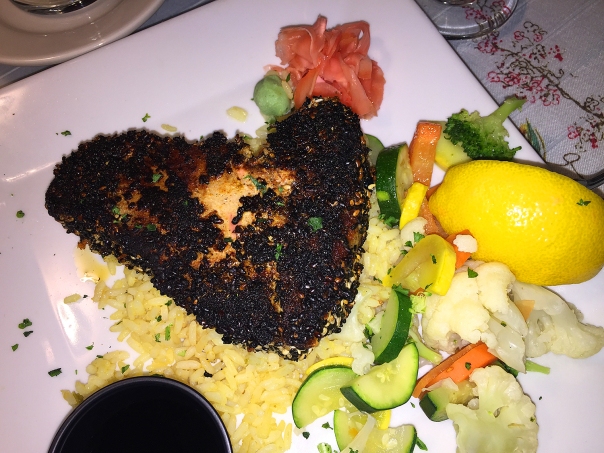 Russ was excited to see one of their nightly specials was a Duck entrée (we can’t remember the tile). However, while it was served with a delicious polenta and perfectly cooked asparagus spears, in the end he was disappointed in the overcooked meat which he had ordered medium-rare, bathing in a sweet sauce, which for him was a bit cloying. This was the only pitfall of the evening. 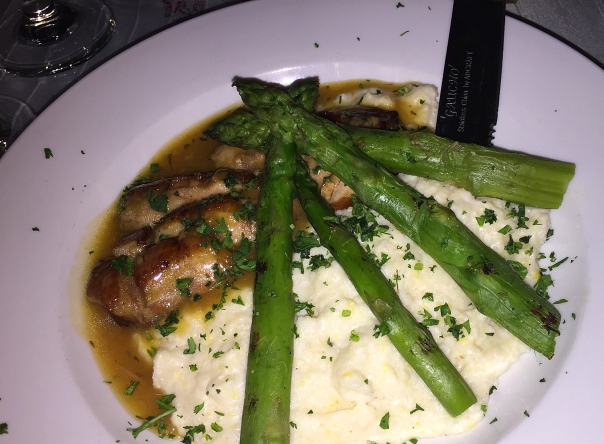 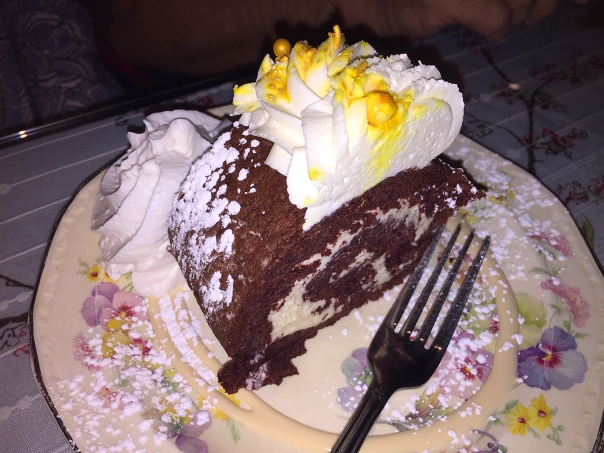 Robin’s Nest is known for their large selection of delicious desserts so some of the gang was gung-ho to venture there. Jane and Francis opted to share the Chocolate Soufflé Roll with coffee liqueur cream filling topped with a swirl of whipped creme and a sprinkle of edible gold enhancements. 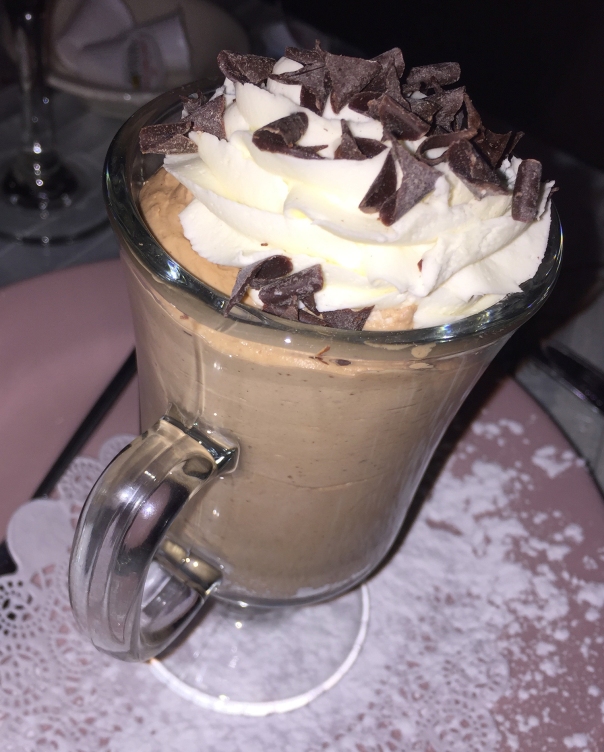 Not realizing the size of the dessert, Russ was a bit overwhelmed with his large glass of Chocolate Mousse topped with whipped creme and dark chocolate curls. Although it was very good, he said had he known, he would not have ordered it.

In addition to all of the wonderful delicacies, Robin’s Nest also offers live music inside and out (weather permitting), comedy nights, catering services, special events and psychic readings by Diana! We can’t wait to go back—possibly in warmer weather to dine al fresco…