Usually the term “braise” denotes a long, slow cooking procedure, which this Beer-Braised Shrimp is definitely not. The Wikipedia definition: Braising is a combination-cooking method that uses both wet and dry heats: typically, the food is first seared at a high temperature, then finished in a covered pot at a lower temperature while sitting in some amount of liquid. 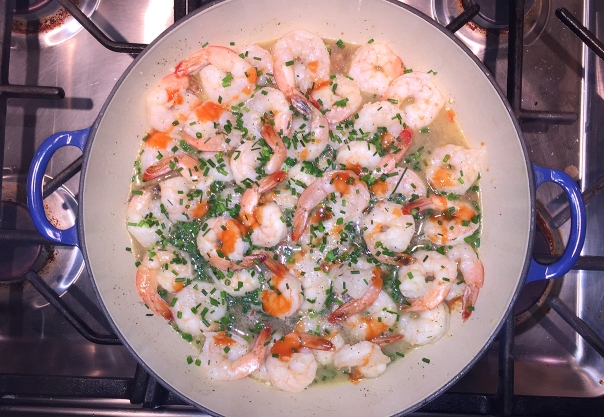 So yes, the recipe does meet some of the criteria. The seafood is not seared in a pan first, but rather added to the simmering beer broth, then cooked covered—but only for a few minutes as opposed to hours; making this dish a great weeknight addition to your fast-and-easy recipe repertoire.

Bread is usually not a staple in our abode, so if you don’t have a crusty baguette to mop up those tasty juices you may want to ladle the shrimp over some steamed rice as a vehicle to capture the flavors. Speaking of flavor, the bitter and spicy notes of the colorful radicchio (of the endive family) and parsley salad is a perfect accompaniment to the main dish.

My bad? I bought already-peeled shrimp by mistake, although the tails were still intact. The most flavorful part of the shrimp is the shells. Left on for the cooking process, shrimp shells contribute a depth of flavor that’s somewhere between toasty and briny. Cooking unpeeled shrimp is the thing that will really make that shrimp flavor pop, and to reap the benefits, the only thing you need to do is…nothing. But I can’t say my peeled crustaceans were detrimental to the dinner because it was so much easier only having to remove the tails as opposed to the entire shell.

People in many parts of the world eat shrimp with the shells on, and it’s not considered a big deal—in fact, my brother is one of those people—I’ve seen him do it on several occasions. The “crunch” factor is supposedly the appeal, but I keep thinking how difficult that would be going down the gullet, yikes! Whether it’s best to leave the shells on or off is like so many things: it depends.

Shrimp cooked in their shells have a plumper texture, and they don’t seem to go from perfectly cooked to overcooked as quickly. However, in the presence of company, pulling the shell off at the table is messy, a lot of work, and creates an unsightly garbage heap on your plate or in the discard bowl. But, I have yet to meet a person who does not despise the prep task of peeling raw shrimp, although I’m sure they are out there.

So you peeled the shrimp before cooking them. No sweat. But for heaven’s sake, don’t just throw the shells in the trash! The shells of crustaceans (that means shrimp as well as lobster, crayfish and crab) are loaded with flavor. So much so that an entire cooking technique, for making bisque, was invented for the purpose of extracting it.

We almost always buy shrimp with their shells, and even their heads, because we make a mighty-fine seafood stock from our leftover shells that can be incorporated into so many yummy dishes. This time however, I must have had my mind otherwise occupied because I bought already-peeled shrimp…

On another note, there’ll be a 1/3 of a bottle of lager leftover, so have a nip while you cook…