Skeptical at first, we were gastronomically impressed over the outcome of this Sambal Short Rib Stir-Fry. Typically, short ribs take hours in a slow braise, so when we saw this stir-fry method, we definitely had our doubts that the meat would be tender after less than a half hour. Here, thin-sliced short ribs become a quick cook MVP in this seriously flavorful weeknight meal. 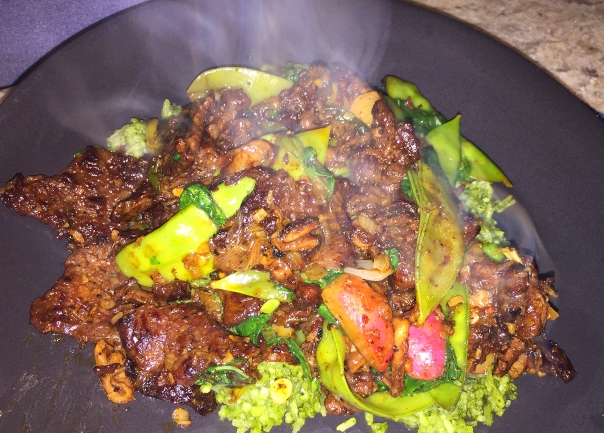 Since the supermarket was only carrying bone-in short ribs, we had to cut the meat off the bone before slicing into thin strips. However, we considered it a bonus because we’ll freeze the bones until such time Russ makes another batch of homemade meat broth. Keep in mind, you can partially freeze the short ribs before you slice to get really thin cuts. 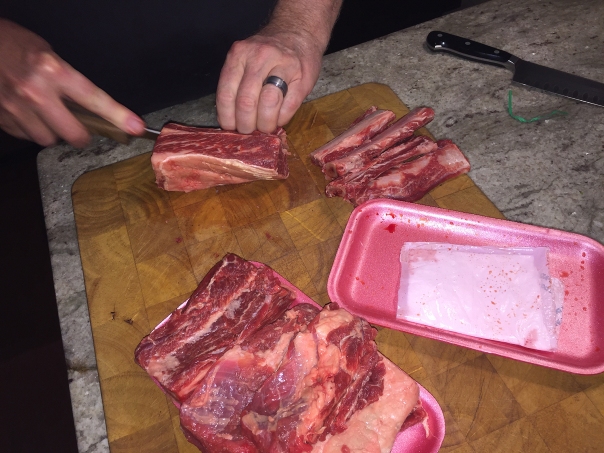 Russ slices the meat off of the bones which he saves to make meat stock at a later date.

To make it easier to cut the ribs into thin slices, freeze the meat for about 30 minutes.

Be forewarned, there is a fair amount of prep and you really need to do it all prior to the beginning of tossing ingredients into your wok. You’ll be tossing and stirring often during each step.

In case you are not familiar with sambal oelek, it is a fiery Indonesian ground chile paste typically made from a mixture of a variety of chili peppers with secondary ingredients such as shrimp paste, fish sauce, garlic, ginger, shallot, scallion, palm sugar, lime juice, and rice vinegar or other vinegars. (Sriracha would be a decent substitute.) The spiciness will be somewhat counterbalanced by the sweet mirin.

Instead of making a new batch of rice, we had some leftover green rice that I reheated with a touch of added chicken broth, and it actually went quite well with the stir-fry. 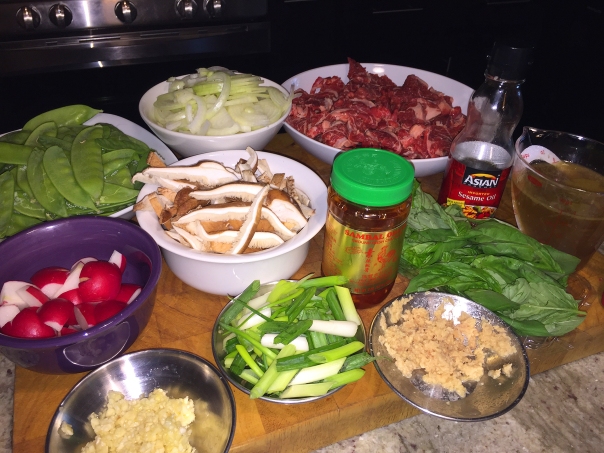