Fresh asparagus is synonymous with Spring and those spear-like green stalks lend a crisp contrast to shrimp’s juicy flesh. We love the delicate, briny flavor that shrimp brings to a stir-fry, especially in Stir-Fried Shrimp and Asparagus in Garlic Sauce—a perfect recipe that marries the two in a harmonious union.

If you use shelled, deveined shrimp, few dishes can be faster. In most cases, we buy the shrimp with their shells intact because we like to save them for making homemade seafood stock. Although I must admit, shelling and deveining the little critters are near the least favorite of culinary tasks.

The technique used here is atypical. Instead of a searing-hot skillet to cook all of the components, cook the vegetables on high but turn down the heat before adding the shrimp, which are then shallow-poached in sauce to keep them moist and tender. The sauce is built on a flavorful base of soy sauce, sherry, and sherry vinegar. A little cornstarch ensures that the sauce thickens to just the right shrimp- and vegetable-coating consistency.

Start the shrimp stir-fry by tossing the shrimp with a little salt and sugar, which adds complexity without noticeable sweetness, and let them sit for 30 minutes. This not only seasons the shrimp but also helps them retain moisture during cooking. The rest of the meal doesn’t take long to prep, and just mere minutes to stir-fry making the recipe an ideal candidate for a weeknight dinner.

NOTE: Asian broad bean chili paste or sauce is also known as toban djan. Check out our other blog on this sauce, An Avid Fan of Toban Djan, with a very tasty recipe of Chicken, Shiitake and Watercress Stir-Fry. 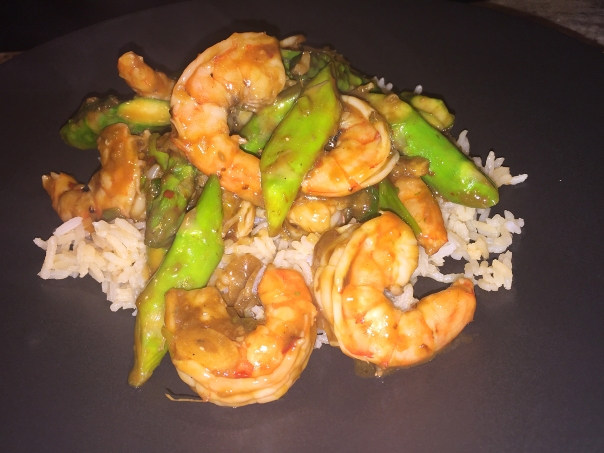 We served ours over a bed of jasmine rice steamed in homemade seafood stock.