We hit the Motherload! On a recent trip to California visiting family members, the foodie gods (or more precisely, our brother-in-law David) presented us with an opportunity to dine at a superstar of the American restaurant revolution, Chez Panisse. Founded by Alice Waters and a group of idealistic friends, it opened its doors in 1971. A Berkeley, California restaurant, it’s known as one of the inspirations for the style of cooking known as California cuisine. Russ dubbed it “The Vatican of New American Cuisine.”

A neighborhood bistro, Chez Panisse is named after Honoré Panisse, a character in Marcel Pagnol’s 1930s movie trilogy about waterfront life in Marseille (Marius, Fanny, and César), as an homage to the sentiment, comedy, and informality of these classic films. 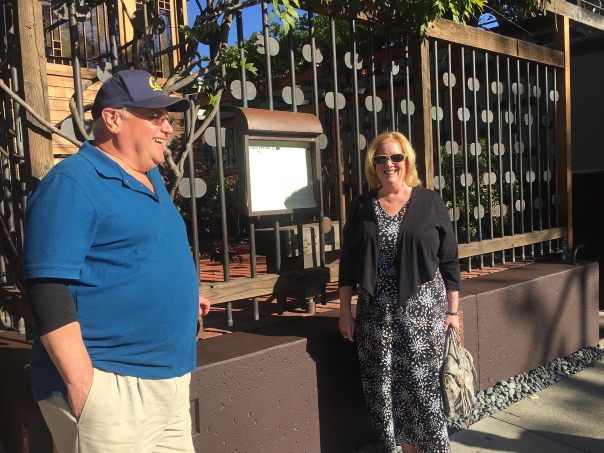 We had an hour to kill before our dinner reservation, so David suggested we check out César, a treasured Bay Area tapas bar with a serious pedigree, opening 18 years ago next door to the famed farm-to-table temple Chez Panisse—founded by alums of the fabled restaurant. It has since become renowned for a rotating menu of authentic tapas created from ingredients from Spain and local produce, meat and seafood. Knowing Russ’s penchant for everything Spanish, we were all for it!

The compact, elegant bar-restaurant routinely makes the list for The San Francisco Chronicle’s annual “100 Best Restaurants of the Bay Area.” Its cookbook, César: Recipes from a Tapas Bar, was hailed by Food & Wine magazine as “one of the ten best cookbooks of the year.”  With accolades like that, you bet we were going to try it!

We split two small tapas: Montaditos—an assortment of three toasts one with portobello mushroom, piquillo pepper and queso fresco, another with boquerones and anchovies with alioli, and a third with roasted pork loin in brine with pincho spicy alioli;  Plato de Charcuteria—chorizo ibérico, ibérico longanzia salchichon, and surtido de quesos.

Back to CP—David’s family had been in the linen business for years and that’s how how he got to meet Alice back in the 70’s. Unfortunately on the night of our visit, Ms. Waters was out of the country so we didn’t make her acquaintance, however we did get to meet a few of the chefs in action back in the kitchen, but I’m getting ahead of myself here…

We knew a few months in advance about our reservation at CP, and also knew the menu changes every night. It’s designed to be seasonly appropriate and composed to feature the finest sustainably-sourced, organic ingredients—in our case, it featured seafood for the main course.

Seated in a corner (Table #11) the guys got a view of the open kitchen in action, while us ladies enjoyed eyeballing the dining room decked out in craftsman-mission style decor with a view out the front window. While scoping out the interior, our pleasant waiter Robert suggested an Etna Rosata Rosé from the Grachi Winery to accompany the seafood dinner. I’m a bit skittish because rose’s can be a bit too sweet for my taste, but I went along with the ride figuring I could switch if necessary—but necessary it wasn’t.

In the meantime, we were served a complimentary, very smooth glass of Champagne with dry red vermouth; while Dee opted to have a glass of the infamous Navarro Winery grape juice instead. Our bottle of wine arrived shortly after a basket of fresh crusty bread was delivered table side, followed by an aperitivo of a very tasty gazpacho topped with a purple edible flower prepared by head chef Cal Peternell. 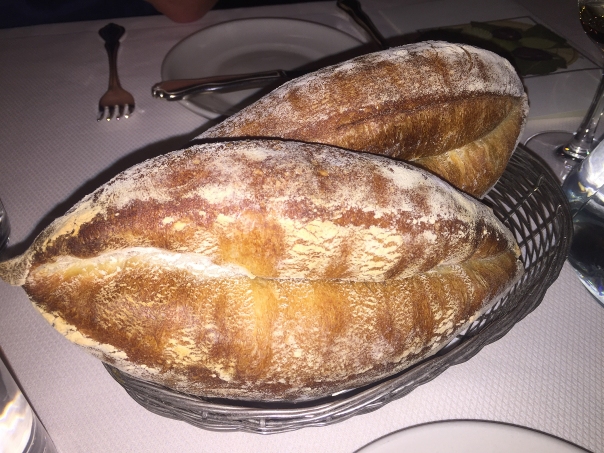 I can’t say enough about our over-the-top delicious salad. Simplistic in its ingredients, the end result was a well composed culinary delight. I just adored the Pennyroyal Farm goat cheese frittelles with a drizzle of roasted fig vinaigrette accompanied by watercress, red onion and little yellow beans. 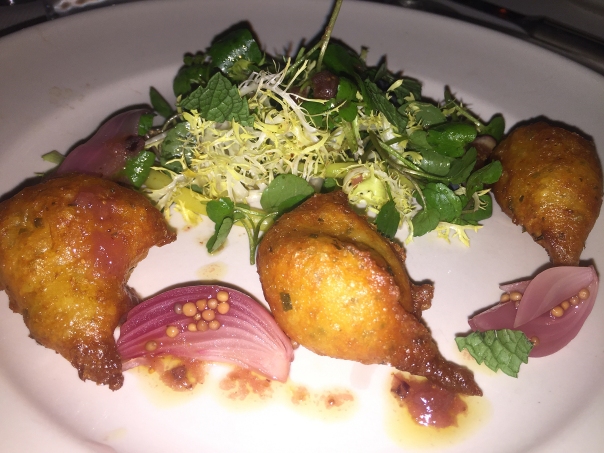 The attention to detail when plating the main course was a work of art! Who could not appreciate this Sicilian-Style Fish and shellfish couscous with saffron and almonds? Assembled with pops of color from roasted sweet red peppers, wilted spinach and a gorgeous green chermoula sauce, it was an awesome continuation of the dining experience. 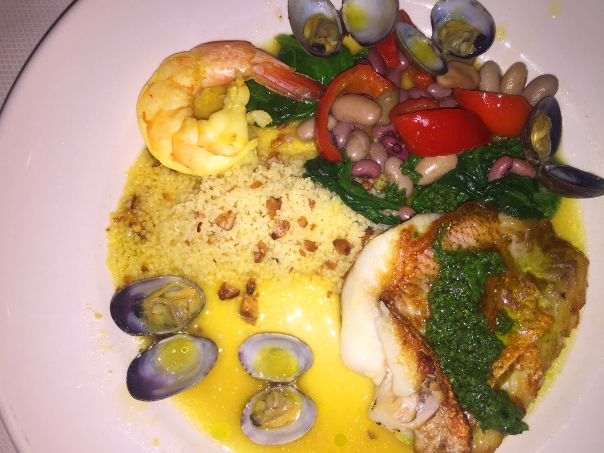 You know by now that I rarely eat dessert, but this time I made an exception. The Frozen Cassata with strawberry sherbet was, in a word, divine. I ate nearly half, which for me was a feat in itself. Cassata in its traditional format is a sweet from Sicily, Italy, consisting of sponge cake moistened with fruit juices or liqueur and layered with ricotta cheese, candied peel, and a chocolate or vanilla filling similar to cannoli cream. As you can see from the photo, ours was an updated version. 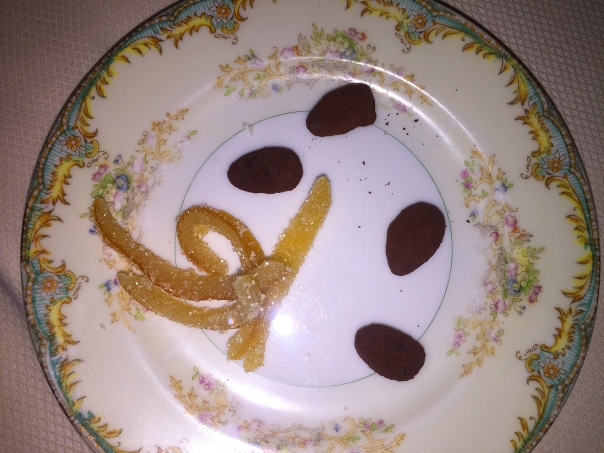 For the finale, we were served a small plate of candied gingered lemon peel and espresso coated truffles. Nice touch!

In order to access the bathrooms, one has to walk through the kitchen and Russ so taken with the whole experience, he felt in doing so, it compared to a walk up to the altar at St. Peter’s Basilica. A bit of an exageration? Perhaps, but needless to say, we were in awe.

Being an artist who lived in New Jersey for a time and worked in NYC, I found it interesting that restaurant chef Cal Peternell, below, grew up on a small farm in New Jersey and graduated with a BFA in painting from the School of Visual Arts in New York City. After graduation, Cal moved to Lucca, Italy, with his wife to pursue their art careers. Upon his return to the United States, and stints at several different US restaurants, Cal joined Chez Panisse in 1995 and has been chef since 2000.

A few of the other chefs went about their business as our waiter Robert gave us a first-hand tour of the working kitchen.

A BIT ABOUT ALICE
Alice Waters, chef, author, and the proprietor of Chez Panisse, is an American pioneer of a culinary philosophy that maintains that cooking should be based on the finest and freshest seasonal ingredients that are produced sustainably and locally. She is a passionate advocate for a food economy that is “good, clean, and fair.” Over the course of nearly forty years, Chez Panisse has helped create a community of scores of local farmers and ranchers whose dedication to sustainable agriculture assures the restaurant a steady supply of fresh and pure ingredients.

On a side note, Kim Cochrane (our sister-in-law who lives in Marin County) told us that she actually talked with Alice Waters via the phone to discuss the creation of their sustainable, organic garden that Kim and her colleagues designed at the school where she teaches special ed. Now if she can only obtain a photo op!

On our way home from Berkley, David wanted to show us another Bay Area icon, this one in Oakland. Heinold’s First and Last Chance is a tiny waterfront saloon opened by Johnny Heinold in 1883 on Jack London Square. The name “First and Last Chance” refers to the time in which for many sailors, the pub was the first and last chance to drink alcohol heavily before or after a long voyage.

The view from this angle doesn’t look like much. 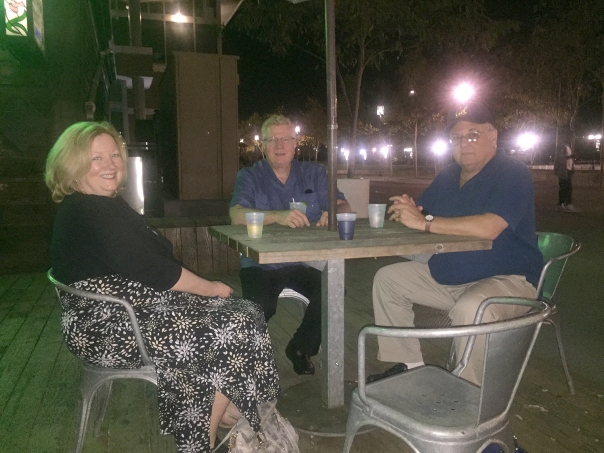 Our last chance for the evening…

It also known as “Jack London’s Rendezvous,” as it was the inspiration for scenes from the Oakland writer’s novels Call of the Wild and The Sea Wolf. The pub in its original form was built from the remnants of an old whaling ship at the foot of Webster Street in Oakland, where it remains today. It was originally designed as sleeping quarters for the workers of the nearby oyster beds.

This huge mastiff seemed to be the bar mascot, with his own beverages of choice.

As David explained, Heinold’s floor collapsed during the great earthquake of 1906 and it has not been fixed since! If you sit on one of only 4 bar stools, you are at a steep angle—which self-corrects your posture after a couple of drinks.

Heinold’s is the last commercial establishment in California with its original gas lighting. The tables came from a whaling ship and the walls and ceilings are covered with business cards, hats of past patrons and money, often signed by sailors about to deploy so they would have money for a drink waiting for them upon their return. Now, is that thinking ahead, or what?