The rich flavor and lush consistency of this classic dish—Pollo en Pepitoria—from Spain’s Castilla–La Mancha region depend on a sherry-based sauce thickened with ground almonds and egg yolks. In addition to being delicious, pepitoria is one of the oldest Spanish recipes around, one that dates back to the 13th century by Cervantes himself! And once you’ve tasted it, you’ll understand why it has persevered through hundreds of years! 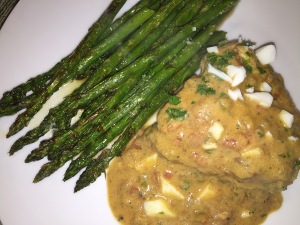 Any dry sherry, such as Fino or Manzanilla, will work in this dish, so for savory cooking purposes, stick with a dry, not sweet variety. We almost always have both brands on hand because not only do we often cook with it, Russ enjoys a drink of dry sherry now and again—not my cup of tea at all. We paired ours with a Grilled Asparagus with Honey and Sherry Vinegar from The New Spanish Table by Anya von Bremzen (recipe also follows.) And crusty bread would make a fine accompaniment if you don’t have a wheat issue. 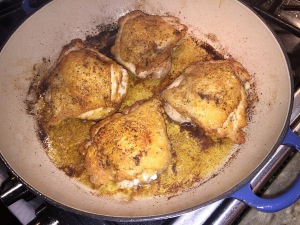 Browning the chicken thighs on both sides. 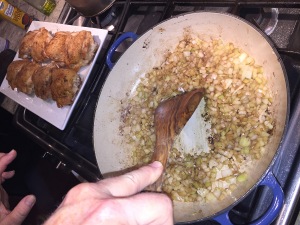 Cooking the diced onion in the chicken drippings.

Nestling the thighs into the onion and tomato mixture. 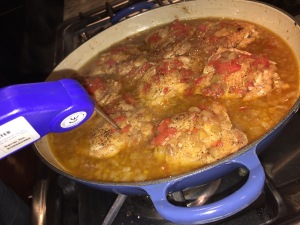 Checking the chicken’s temperature for doneness.

An interior shot of blender ingredients.

Blended almond mixture is cooked with other ingredients to make the sauce. Almonds processed with garlic, saffron, and hard-cooked egg yolks add body and flavor to the braise. 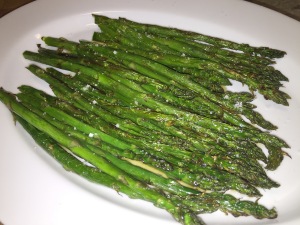 Unlike stews, sauces, and stir-fries that are thickened with starches or dairy, many Spanish stews and braises get their rich, hearty body from a pesto-like nut-based thickener called apicada. The basic formula, which many sources claim dates back to at least the 13th or 14th century, includes finely ground almonds or hazelnuts (picar means “to chop”) and seasonings like garlic, herbs, and spices. But many versions also contain toasted or fried bread or even hard-cooked egg yolks, as in the recipe here. The ingredients are traditionally pounded to a thick paste with a mortar and pestle (we use a blender for speed) and stirred into the pot toward the end of cooking so that it can lend body, richness, and flavor to the cooking liquid.