Confession. Our go-to supermarket had varying types of whole grain pasta, but not the farfalle. BUT, they did carry Barilla “Protein +” which is a 100% plant-based protein containing among other flours, lentil, chick pea, barley and pea protein. AND, it contains 5 grams of fiber! Seemed like a good substitution to us…

Here, the rustic whole-grain (or plant protein) pasta is enhanced with the mild sweetness of roasted peppers and shrimp, and the kick of a spicy garlic marinade. You can use jarred roasted peppers, if you like, but roasting your own will make the pasta tastier, especially if you make them a day ahead—which will save you a chunk of time.

I make mine right on top of a gas burner, making sure to char all over, including the tops and bottoms. Seal them in a plastic bag for 15-20 minutes which will help in removing the burnt skin. Keep in mind, if you have to char your own peppers, it will add to the total time. You can always do this a day ahead.

Our gas oven broiler is sub par (that’s about the only advantage credited to an electric stove). So instead of arranging the marinated shrimp on a greased rimmed baking sheet, we did NOT pat the shrimp dry. Instead, on a gas burner, we heated a large cast iron skillet until smoking hot (with no additional oil), and arranged the shrimp in one layer for about 90 seconds. Then with a wooden spatula, we stir-fried them another minute and a half until just done, scraping them into a bowl covered with tinfoil until ready to use. 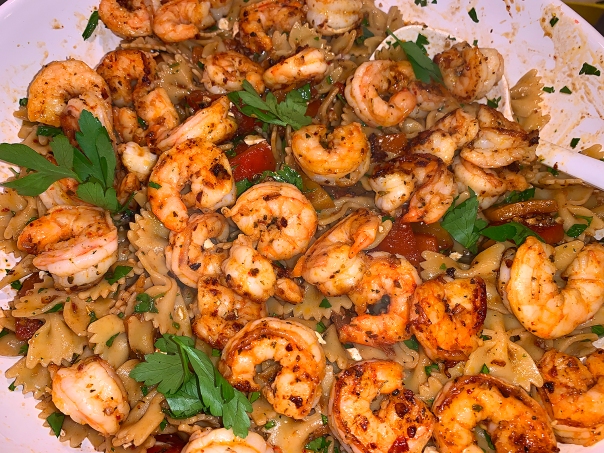 Now about those Fresno chilis. As luck would have it, the grocery store was not carrying them the day we shopped. A good substitute? The Fresno pepper looks and tastes almost like the world’s most popular chili pepper, the jalapeño, but it can be slightly hotter. At its hottest, it reaches the heat level of a mild serrano pepper, which can be somewhat spicy for some. So we bought serrano chilis!

And, because it’s the way we roll, we added 1 teaspoon of smoked paprika—which is typically not a hot spice—in actuality, the spice itself is quite mild and sweet. Smoked paprika is a Spanish cousin to the more widely used sweet Hungarian paprika. It’s made from pimiento peppers that have been dried and smoked over an oak fire, then ground into a fine powder. You’ll sometimes see it called pimenton, smoked pimenton, sweet paprika, Spanish paprika, or any variation of those names, but you can always recognize this spice by its deep red color and powerful smoky aroma. 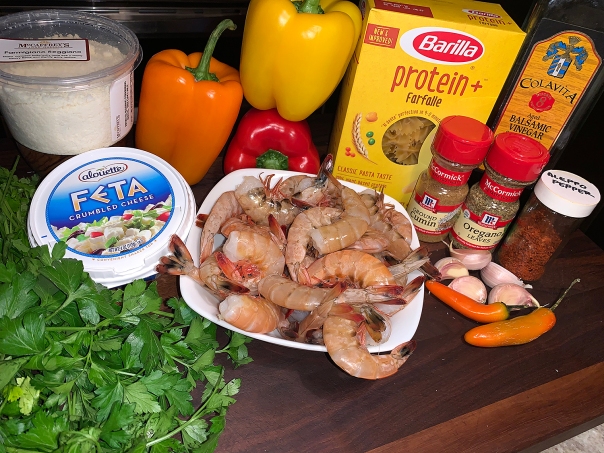 Adapted from a recipe by Maria Speck from Fine Cooking