These next two recipes from cookbook “The New Rules” by Milk Street (MS) were a mixed blessing. I chose them for a Meatless Monday meal, and because they both contained mustard seed, I thought it would bring them together. Not so much. And to their credit, MS did not intend for the both of them to be paired with each other.

Each in their own right were very good (although The Hubs thought the red onion mixture could’ve been less vinegary—at first). But to be honest, the flavor profiles were so very different, they didn’t really belong on the same plate. The Sweet-and-Sour Swordfish with its pickled red onions had a German bent; while the South Indian Sautéed Spinach was just as the name implies, Indian-influenced.

For a future combination, I might pair the sautéed spinach side with an entrée of Tandoori or Butter Chicken; and the fish with a simple rice or potato dish, or even sautéed greens without all of the additional spices that compete with the vinegary onions.

BTW, we had the leftover pickled red onions a day later as a replacement for onions in Sautéed Sausages with Grapes and Balsamic Glazed Onions, a recipe I posted back in 2016. Believe it or not, they had mellowed and sweetened making a perfect accompaniment to this dish. Read on and make up your own mind… 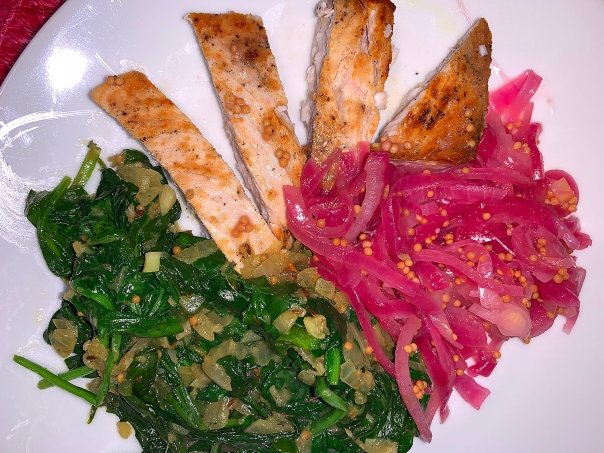 Rule No. 48: Keep Seafood Tender by Saving Acids for the End

Based on Italian agrodolce—the pairing of sweet and sour—the sugar and vinegar-seasoned red onions in this dish add punch to mild and meaty swordfish. MS also borrowed from Spanish escabeche and instructs us to marinate the fish after cooking so the steaks really absorb the flavors.

The fish should be served barely warm or at room temperature, a fact I wasn’t really comfortable about. But it was surprisingly good at that temperature. It can also be prepared ahead, refrigerated up to overnight and served chilled, if you prefer.

Nearly all fish and shellfish contain traces of mercury. And while swordfish has plenty of nutritional advantages, pregnant and nursing women should avoid eating swordfish because it can be higher in mercury than most commonly eaten fish such as shrimp, canned light tuna, salmon, pollock, and catfish.

Our swordfish was just under 1-pound since there was just the two of us, although I kept the amounts of the other ingredients the same. And indeed, there was leftover pickled onions which we incorporated with a sweet sausage and grapes meal the next day while eliminating that recipe’s balsamic onions.

NOTE: Don’t use a metal baking pan for marinating the fish, as metal may react with the acidity of the marinade and leave the dish with an off metallic taste. And don’t slice the fish until ready to serve. If sliced before marinating, the acid will cause the fish to turn an unappealing grey color.

Rule No. 7: Bloom Seasonings in Fat for Bigger Flavor

This simple spinach sauté, inspired by a dish called palakura vepudu, is quick to make and has a wonderfully rich aroma and flavor. The secret is infusing the dish with a tarka—spices toasted in butter to bloom their flavors and fragrances. Cumin seeds and mustard seeds are used as the flavor foundation for the dish; alliums and other aromatics are cooked briefly in the tarka to soften their bite.

NOTE: Don’t use baby spinach for this dish, as the leaves quickly turn soggy and limp. Mature spinach is sturdier and more flavorful. Look for bunches with large, dark green leaves and snappy stems.