Chocolate Cappuccino Cheesecake. Sinfully rich and velvety smooth—no, that’s not describing me by any stretch—but it sure is the correct moniker for this cheesecake! When you want to impress, this dessert kicks it up a notch and scales a mountainside…

To set the stage, we were invited to the home of friends, Pat and Charlie, who we generally only see in the summertime at the community pool. But we had them over to our humble abode after the pool closed for the season; and a few months later, we received a reciprocal invitation to visit them at their house.

They are well aware we are foodies, because it was often the topic of conversation during our pool get-togethers. For this gathering, Pat designated me as the dessert chef and gave me free reign on what to make, so I channeled something chocolatey, and impressive—it was the holiday season after all. 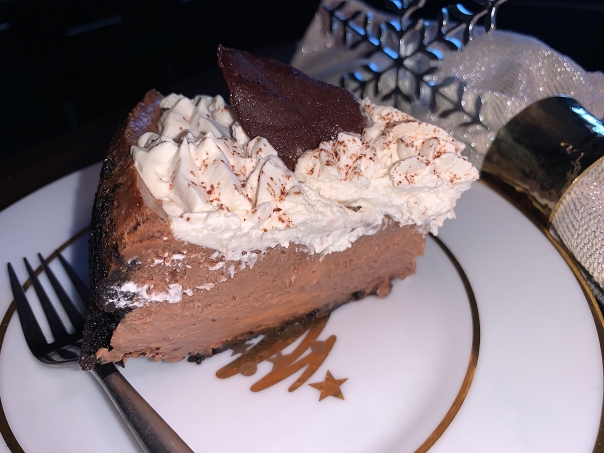 I hadn’t made cheesecake in a few years and I was debating about the wisdom of baking it in a water bath; in the end I opted not to. A word to the wise, if you do, make sure to wrap the springform pan in tinfoil first so that no water leaks into the crust. Speaking of the crust, after looking at the ingredients, I felt there wasn’t enough substance to entirely line the pan bottom and sides, so I doubled the crust, and was glad I did (the ingredients listed below are for double the original amounts).

When prepping, the key is room temperature for dairy ingredients and eggs. Even though I left the stick of butter on the counter overnight, it still was too firm to mix easily with the cookie crumbs. Therefore I plopped the butter in the crumb bowl and zapped it all in the microwave for 30 seconds, perfect!

Don’t start wailing and gnashing your teeth when you pull the cheesecake out of the oven and the center is still jiggly and starting to deflate some. It will firm up after its long rest in the fridge. Leave it in the springform pan covered with plastic wrap and refrigerate overnight, at least 12 hours. When ready to remove the pan, always dip the knife in HOT water and wipe it off before make another attempt at loosening the cake.

It was around 24 hours later that I removed the cheesecake from the fridge and freed it from the metal collar. Unfortunately it had developed a few cracks, but I was undeterred because it was going to be topped with whipped cream swirls, dusted with cocoa powder and enhanced with the chocolate leaves. Then into a cake saver it went and we transported it to Pat and Charlie’s. 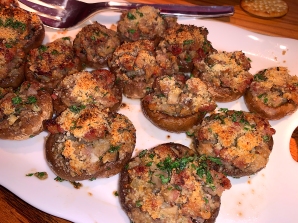 After we toured their lovely house, we retreated to their comfortably finished basement (all Charlie’s doing) for some wine, conversation and a charcuterie platter. And before long, more food, in the form of stuffed mushrooms and loaded nachos appeared. We scarfed those down in no time! Then, of course, dessert is the natural follow up, so out came the cheesecake… “One of THE BEST cheesecakes I’ve ever had!” was one comment… 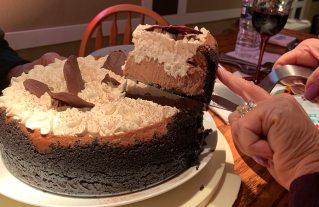 I brought along one of my favorite cake servers, the high heel with the removable magnetic heel for easy serving.

To Make Chocolate Leaves: Melt 1 ounce semisweet chocolate in a pan or bowl set over boiling water, (or microwave in short 30-second spurts) stir until smooth. Brush real non-toxic plant leaves (such as orange or kaffir lime leaves) on one side with melted chocolate. Freeze until firm and then peel off leaves. Freeze chocolate leaves until needed. 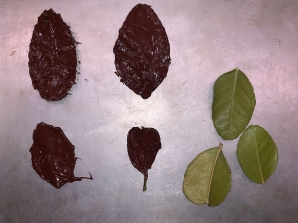 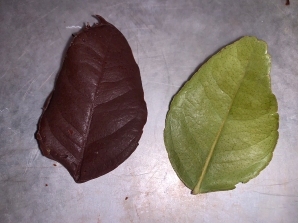 Loosely adapted from a recipe by Cigdem Buke Ugur