It was our third visit to Spain, this time with a stay in Seville, the 4th largest city in the country. While we there only three days, we had a lot on our agenda including a personal guided tour, a flamenco dancing show and a cooking class, the latter of which is the basis of this blog.

Cooking is one of our shared passions (as is Spain), and we looked forward to a 3-hour group session at the “Taller Andaluz de Cocina” located in the market “Mercado de Triana” which is across the river from where we were staying in old town. (Taller in this case translates to workshop.) Since we arrived early before their doors opened, we had the opportunity to check out all of the vendor stalls brimming with the best quality meats, fruits and vegetables, oils, cheeses and restaurants. 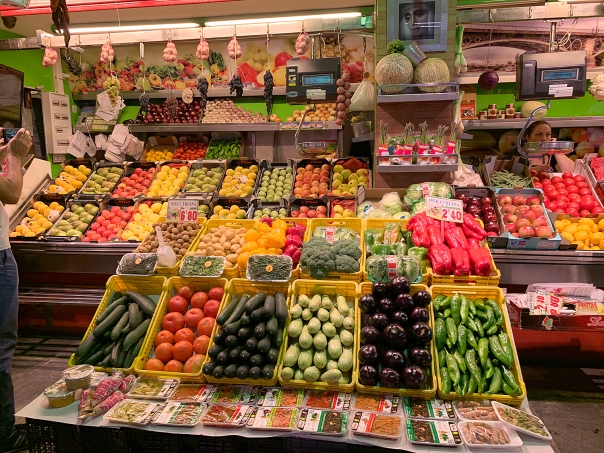 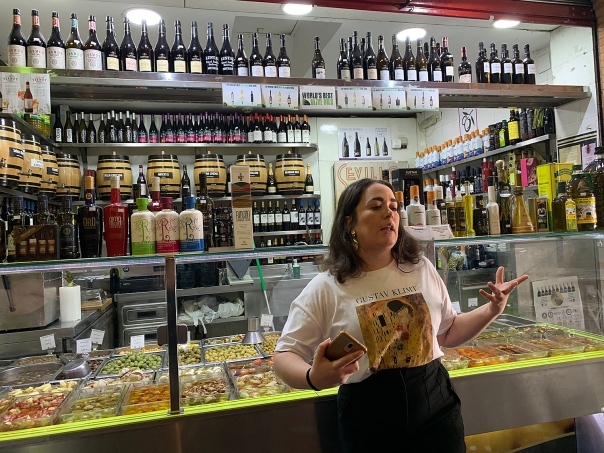 Clare explains the different types of olive oils. Spain is the world capital of olive groves boasting about 866 million trees.

The class size of 10 included a couple from San Francisco; a mother and son also from California; and couples from both Poland and Britain. Our market guide who gave us a detailed tour of the glorious options was Clare; and our humorous but knowledgeable chef was Juan Pedro. (He mentioned his wife is Australian and he plans to move to that country and open a bakery.) 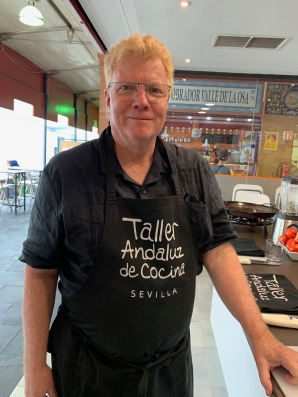 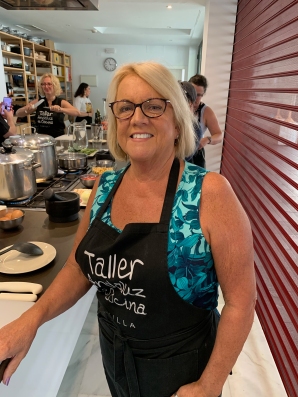 We don our class aprons and can’t wait to get started! 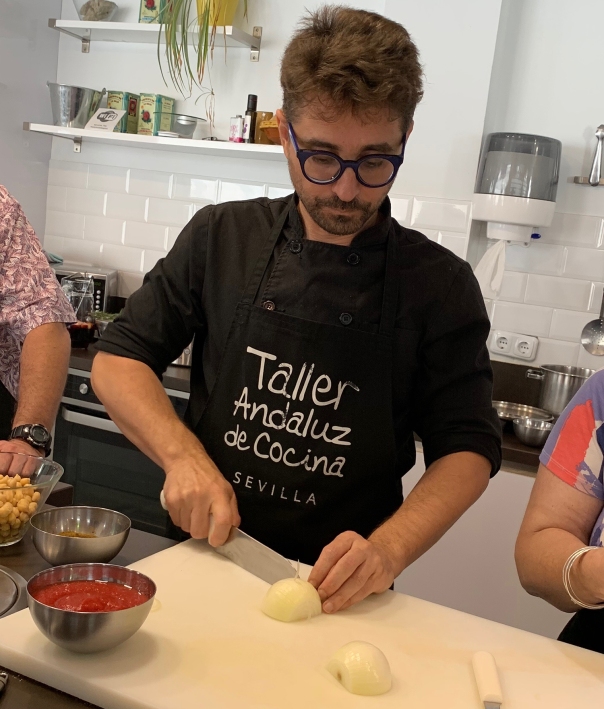 Juan Pedro demonstrates the best way to chop an onion.

The menu for the day started with a tasty Salmorejo (below), a purée originating from the Andalusian region of south Spain (where we were). It is made from tomatoes, bread, oil and garlic. Normally, the tomatoes are skinned and then puréed with the other ingredients. The purée is served cold and may be garnished with diced Spanish serrano ham and diced hard-boiled eggs. 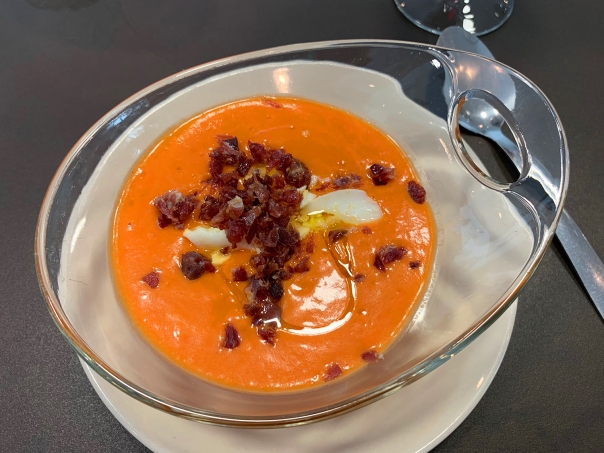 Salmorejo shown as a close-up above, and set before us below. 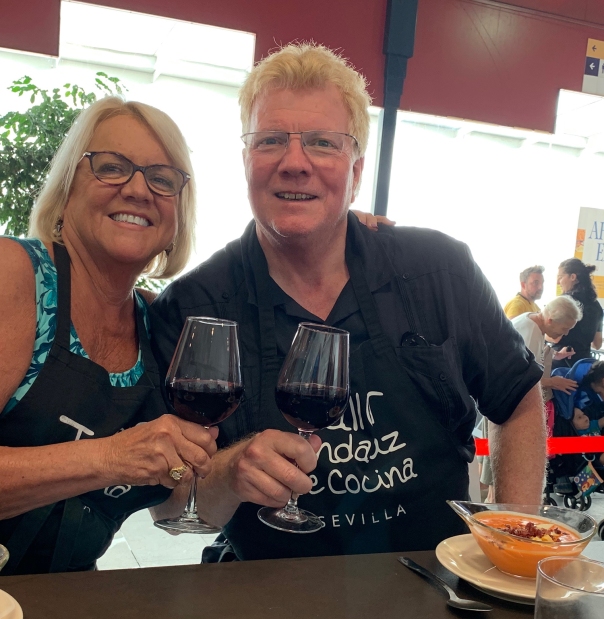 Next up was Spinach with Chickpeas (Espinacas con Garbanzos) a must-try Andalusian dish. It is a classic tapas dish that’s easy to make and wonderfully versatile. Simple, hearty, vegan, comfort food. As Spaniards would say, this dish is ‘bueno, bonito y barato’, which translates as ‘good, beautiful and cheap’. It couldn’t more true. Like many other peasant recipes from Southern Spain, this dish is a fine example of how to make the most of simple and humble ingredients. 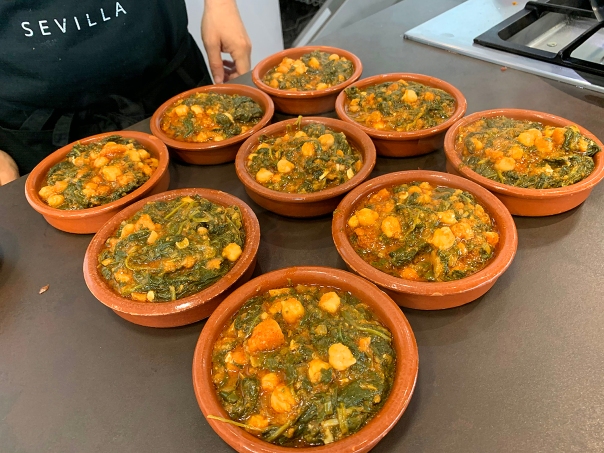 While all of this is going on, Juan Pedro is also making the star of the show, a Paella Valenciana, or Chicken Paella. Now if you’ve been following us for any length of time, you know Russ is a huge fan of making paellas, but this one was prepared quite differently than he’s ever done or read about. 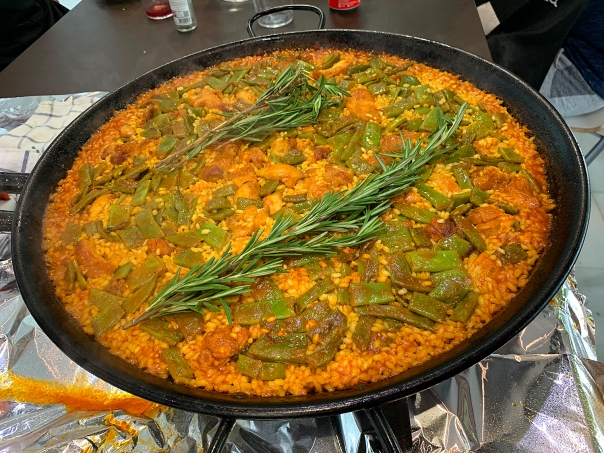 Juan demonstrates how to debone a chicken, then has members of the class try to do so on the cut away parts, as Russ does to a leg below. 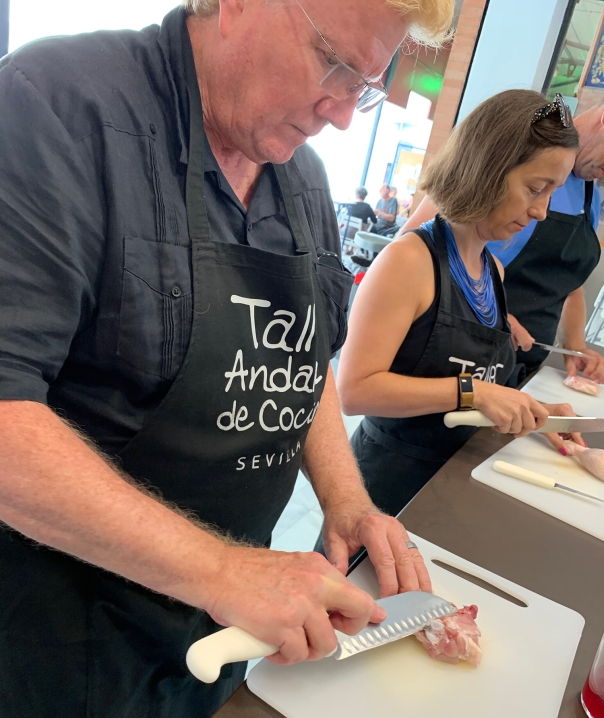 Ideally you want to cook the stock from the chicken carcass and bones and leeks for at least 1 1/2 hours. After some initial cooking of the chicken, beans and artichoke hearts, you bring it all together (chicken and veggies) with the chicken stock so that it reaches the top of the rivets on the pan. Turn the heat up, and boil it down until the broth is right below the rivets. Aha, the rivets! Juan explained that they are regulated in paella pans made in Spain so that your paella comes out perfect every time.

Next, pour the rice across the pan in an even line from handle to handle, precisely between the rivets and immediately set an alarm for 18 minutes. The first 5 minutes on high heat, then 5 on medium heat and then 8 minutes on low heat. For the very last 30 seconds, turn the heat up again, drizzle olive oil, place some rosemary on top, and when the time is up, turn the heat off, cover the pan with a clean tea towel and let it sit for 5 to 10 minutes before serving. Check out this stunning video of Juan Pedro when the paella is done:

The most tasty part of the paella is the crunchy one, stuck to the bottom of the pan—and this one didn’t disappoint. While the paella was wonderful, I was a little disappointed in the amount of chicken and beans in my portion, everyone else seemed to get quite a bit. When I mentioned this to Russ after the fact, he said he would have been glad to share some of his—what a guy! 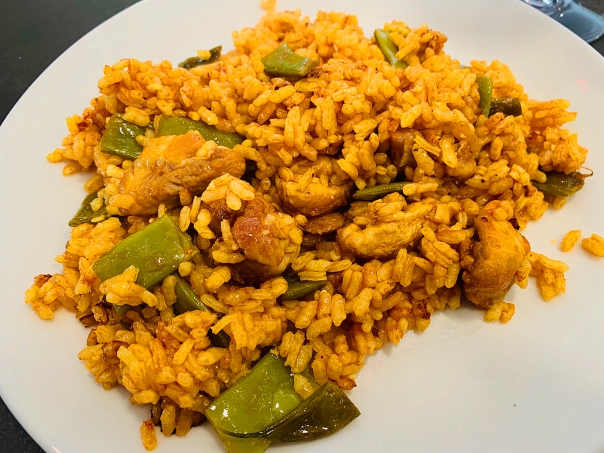 And the finale of the workshop was the Lemon Sorbet with Cava, a nice refreshing finish to the meal. Here you mix all the ingredients together in a blender and serve in a champagne glass with a straw and a mint leaf for decoration. 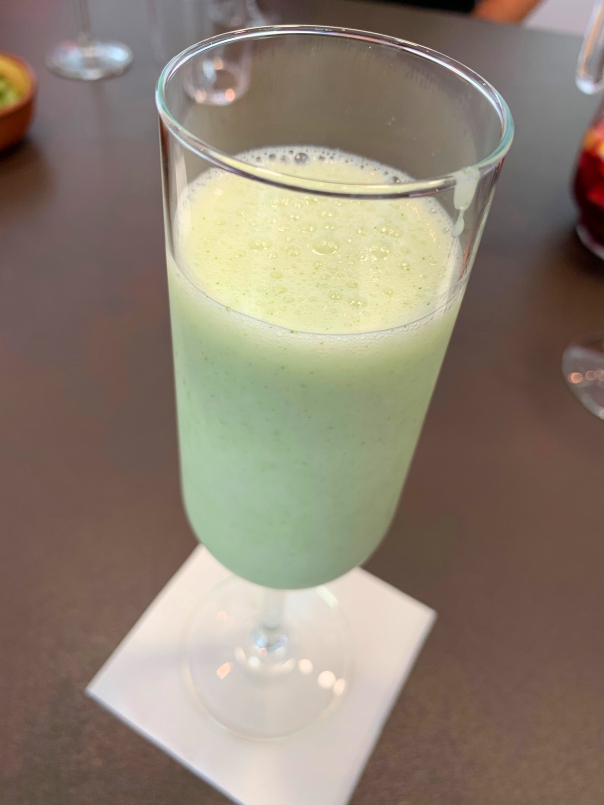 Of course, once class ended, we went back out into the market and purchased some saffron and pimenton. If only we could have figured out a way to smuggle back some of the Jamón Ibérico and good olive oils. Compared to the prices in the States, they were a steal!