Popularly known as the “City of Music,” Nashville—who some purportedly say is growing at a rate of more than 100 people per day—is also often described as the “Athens of the South.” While we are all aware of its expansive music scene, the talent and creativity of its culinary landscape has recently put Nashville on the foodie map. And we were ready to experience it first hand.

Our first trip to “NashVegas” was 4 months ago for a quick Thanksgiving trip to visit daughter Julia and her fiancée Byron who live just outside the city limits in Brentwood. While the turkey dinner was of course the highlight, we did enjoy a few meals out, one of them being Tupelo Honey (located in Franklin) where Fried Chicken dinners reigned supreme for most of our dining party. (Hot Chicken is a Nashville staple cuisine.) 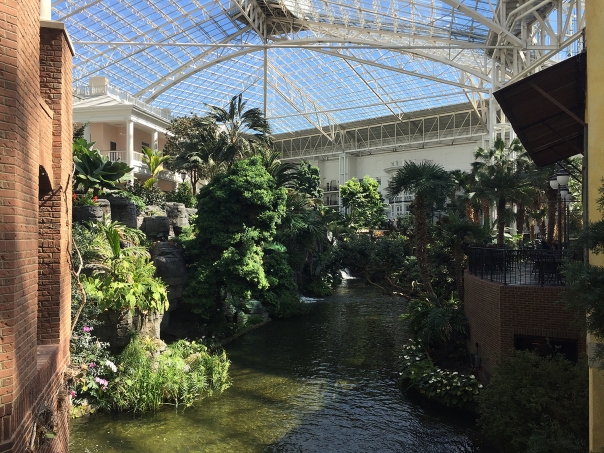 But I digress, this is about our most current visit which was prompted by Hubby Russ’s annual NatCon Conference at the Gaylord Opryland Resort, one of the few places able to accommodate 6,000 attendees. WOW, it is massive at 9 acres, plus 4 acres of combined indoor and outdoor water attractions, and the convention center! It’s actually the largest non-gaming hotel in the continental U.S., meaning you get Vegas resort size without a smoky casino to walk through. A MUST is to simply take a long stroll—drink in hand—and tour the resort’s soaring atriums decked out with decorations, lights, lush vegetation and water features. 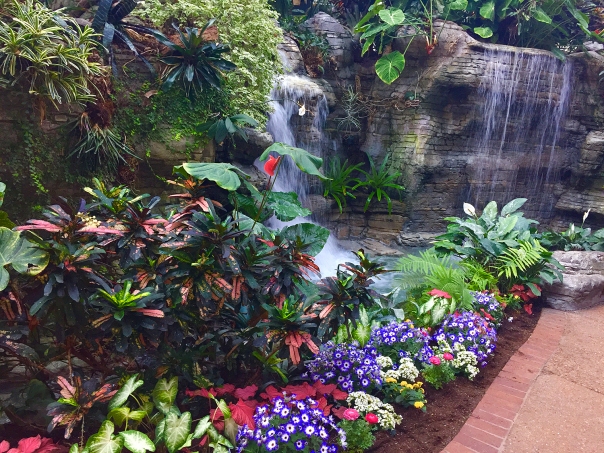 Upon arrival, and after registering for the conference, we had several hours to kill before meeting Russ’s coworker, David Greenspan and his lovely wife Lisa for an evening cocktail. A bit hungry, we settled on splitting some homemade guacamole and chips at the Solario Cantina, where you can enjoy bold Mexican flavors, their signature margaritas and more than 100 tequilas, conveniently located in the Garden Conservatory Atrium. 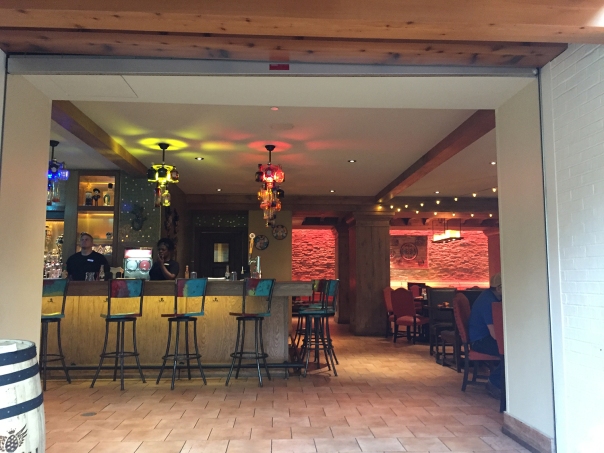 Solaria, at the slow time between lunch and dinner, was delightfully empty as we enjoyed our guac and chips on the patio with a view of the suspended garden walkway.

Newly sated, we walked off some of those calories with a jaw-dropping stroll trying to figure out the lay of the land. The vicinity is so vast, there are actually workers who’s sole job is to point clueless and dazed guests to their intended destinations. To enhance our navigation, we downloaded the Gaylord App which takes you, literally, step-by-step from wherever you are to exactly where you want to end up. (Printed site maps are also available.) 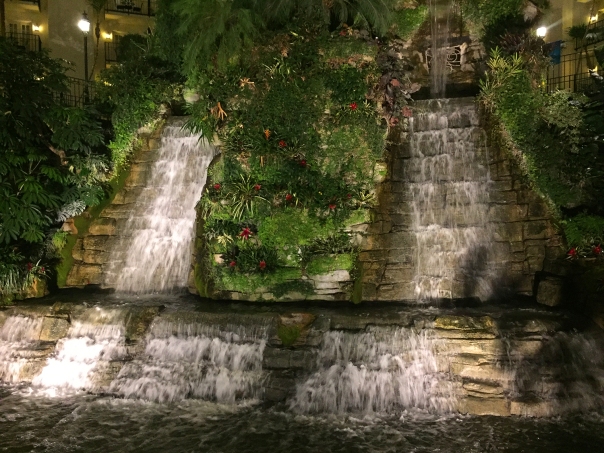 Time for that drink! Located in Garden Cascades Atrium, The Falls Bar & Lounge offers a tapas-style menu, wines, hand-crafted cocktails, bottled beer and chilled champagne in a breathtaking setting overlooking twin waterfalls, shown above. After which, at the appropriated time, we meandered up to Old Hickory Steakhouse, a nod to President Andrew Jackson’s nickname, and features 1855 Black Angus Beef seared to perfection, plus artisan cheeses and an extensive wine list in the Delta Atrium. (Have you noted this is the third atrium I mentioned? There are four total!) 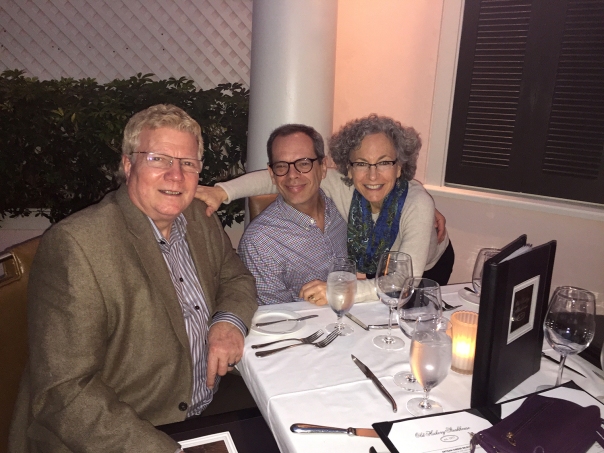 Russ, David and Lisa smile as we wait for dinner to begin at Old Hickory. 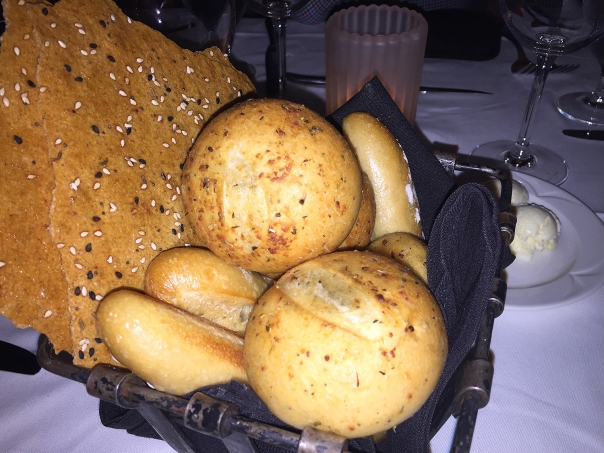 Dinner started with a lovely bread basket brimming with crusty rolls and flatbreads. Lisa, who prefers a plant-based diet, chose the Shawarma-spiced Roasted Cauliflower with a coconut quinoa, romesco and mint chutney entrée. I was not ravenous at that point so I opted for a Jumbo Lump Crab Cake Starter which was accompanied by a lemon-basil remoulade and house pickled vegetables (and even had leftovers). From the Shareable Sides we unanimously agreed upon the to-die-for Roasted Mushrooms in a red-wine reduction and some perfectly cooked steamed Asparagus. 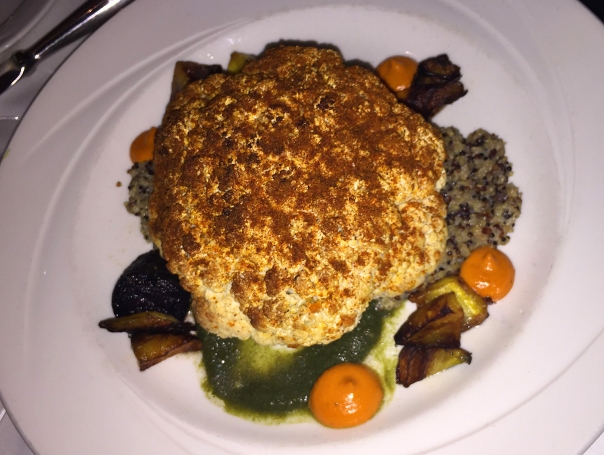 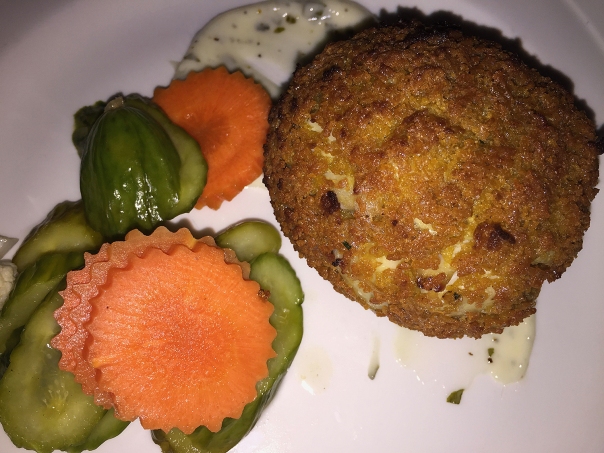 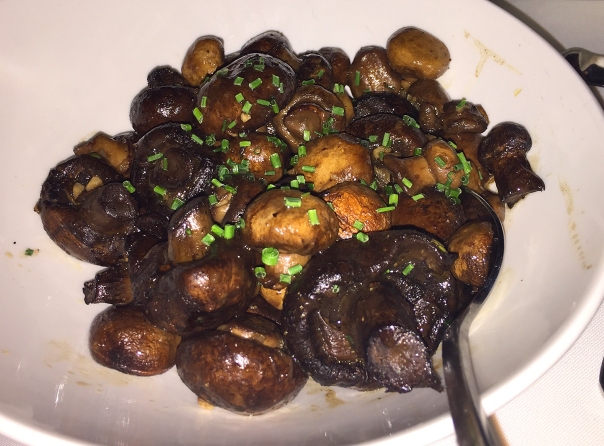 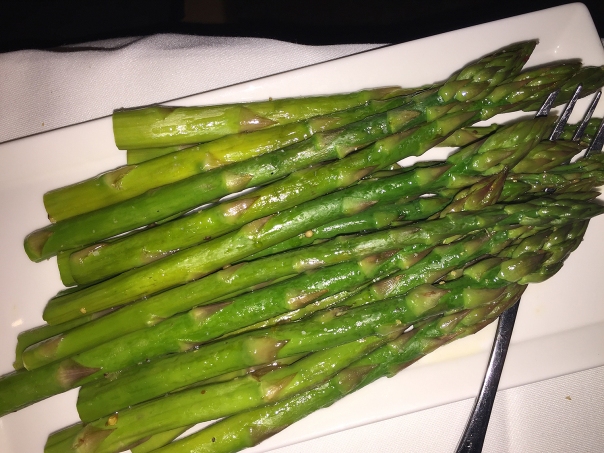 For the men, what’s a steakhouse if you don’t order steak? So they strapped on their macho swagger and both indulged in a he-man-sized Hermitage Selection 24-ounce Porterhouse Steak. Not for the faint of heart (or small appetite), these babies made a statement on the plate. However, Russ uncommonly admitted, it was too rare for his liking. And other than two rather bland looking cipollini onions, I felt the presentation lacked in visual appeal, especially at that price—like could they have tossed on some green herbs or something? 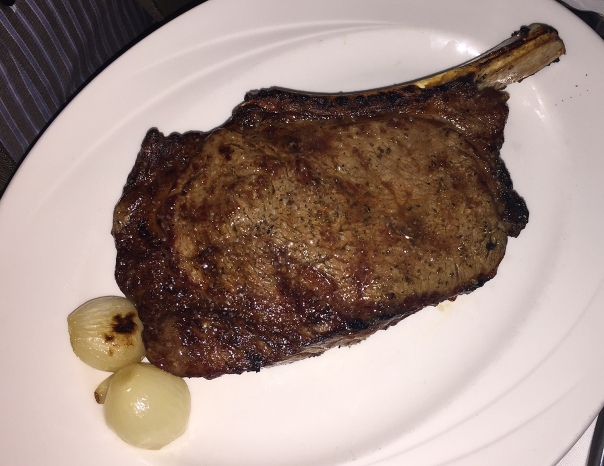 The following day while the men attended the conference, Lisa and I decided to take a walk by The Grand Ole Opry, shown below, and then do some shopping at the nearby mall, where some great bargains were to be had—although the purchases were taxed at a hefty 9.25% (7% state, 2.25% county). 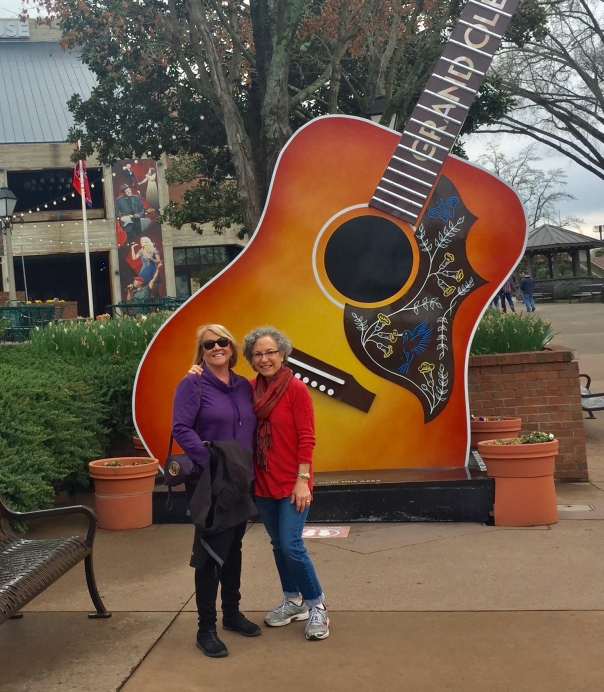 Lisa and David, who arrived a day ahead of us, mentioned that they attended a moonshine-tasting experience at the Smith Creek Moonshine outlet right in the mall. So when we decided to do lunch at the Rainforest Café, practically next door, Lisa coaxed me into it. 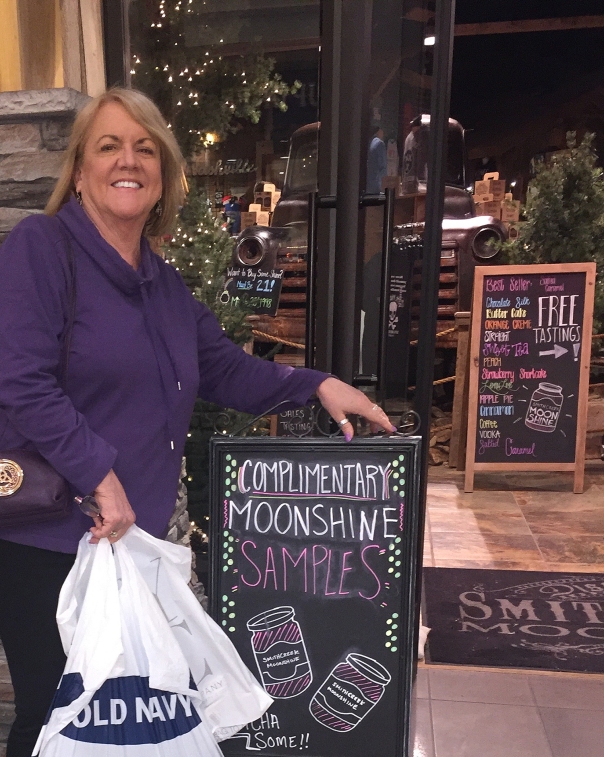 Filled with some trepidation recalling not-so-pleasant memories of imbibing in moonshine decades ago, I put my hesitation aside—when in Rome, right? I was more than surprised how good they were! After sampling over a dozen tiny thimblefuls, this experience rated on the other end of the spectrum, so much so, that I bought a jar of the ever-so-smooth Coffee Smith Creek Moonshine (my personal fave), and I’m not even a coffee drinker! 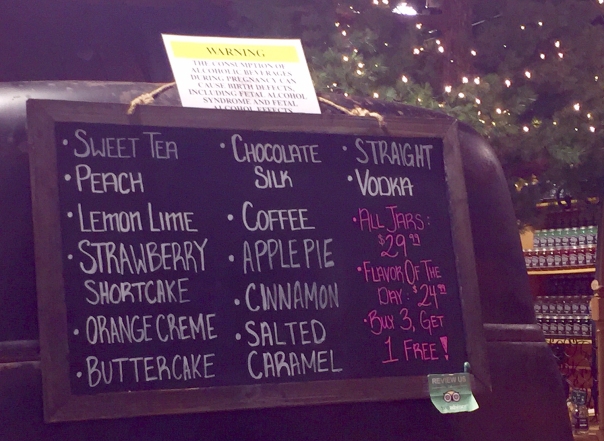 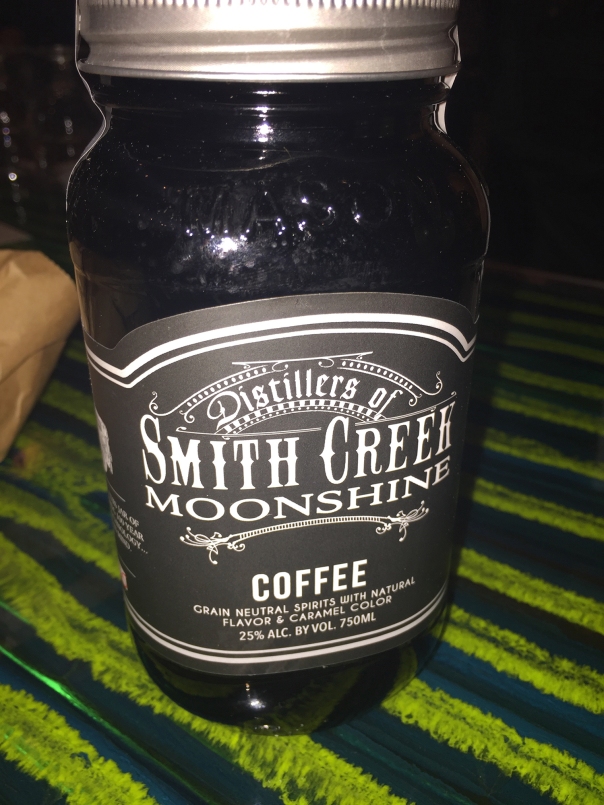 The following night Russ and I were on our own for dinner and we decided you can’t be in Nashville without chowing down on some good old fashioned BBQ, which at the Opryland means Jack Daniels. (Speaking of Old Fashions, that became Russ’ signature drink on this vacay.) 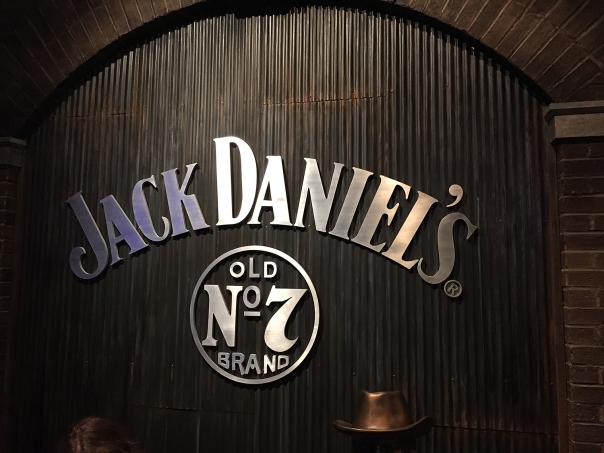 It’s a sin not to start with fried chicken wings, right? Well, at least it felt that way to Russ, so we put in an order for their Habanero Jack Daniel’s Barbecue Sauce Wings which came plated on a small rimmed baking sheet (as did most other dishes). Frankly, while they were tasty enough, I prefer extra-crispy, spicy, dry-rubbed wings with a dipping sauce or two. 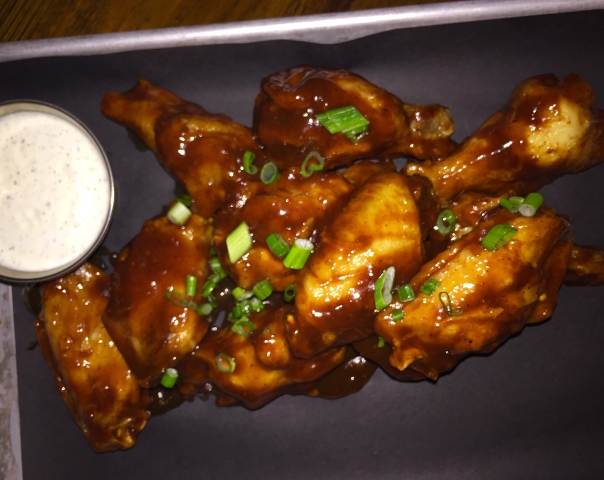 Not wanting a full-on dinner, I chose a bowl of JD’s Chicken Chili made with white beans, smoked chicken, tomatillo, green chili and a couple of jalapeño hush puppies added to the plate for good measure. Russ wasn’t going to be satisfied until he had the Smokehouse Favorite Hickory Smoked BBQ Pulled Pork meal. With this, he had a choice of two sides and opted for the typical combination of cole slaw and baked beans. My chili was quite good (although the temp could have been hotter), and Russ loved his! 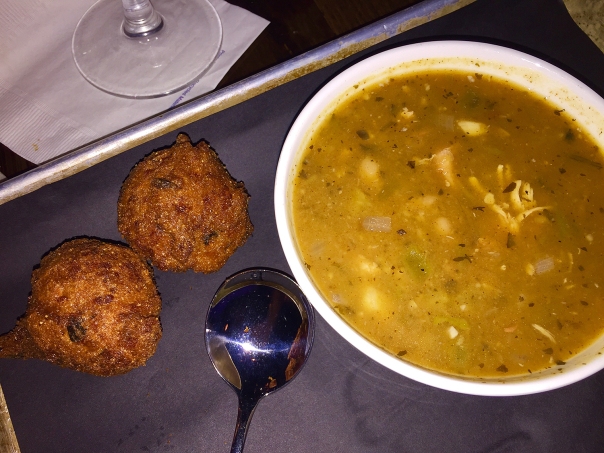 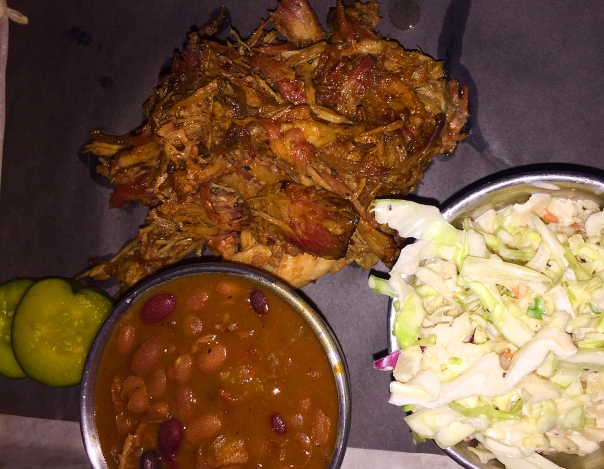 My gal-pal Lisa had flown the coop back to Philly so I was on my own for lunch on the next day of the conference. For the past several, I had been eyeballing Cascades that sits in a dramatic atrium setting surrounded by soothing waterfalls, shown below. When they opened for lunch at 11:15, there was already an impressive line of people! 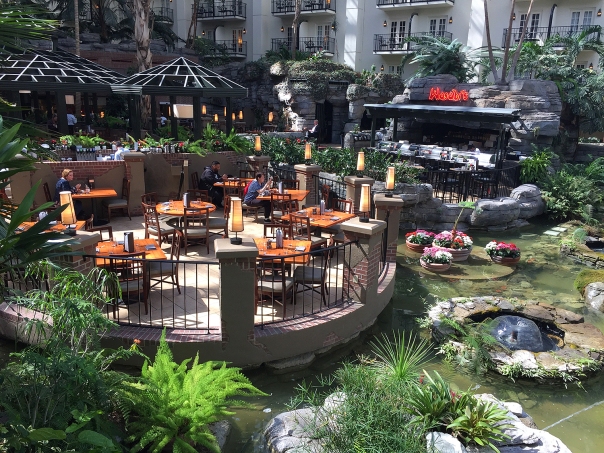 Craving something on the lighter side, it didn’t take me long to zero in on the Mediterranean Butter Lettuce salad plated with cucumber, olive tapenade, Parmigiano-Reggiano, crispy garbanzo beans, and lemon-oregano vinaigrette. It also comes with an add on choice of chicken, shrimp or salmon; I chose the latter. While it may not look like much, I told my husband later that it was likely one of the BEST salads I’ve ever eaten, and believe me, I’ve eaten more than my share, willingly of course 😉 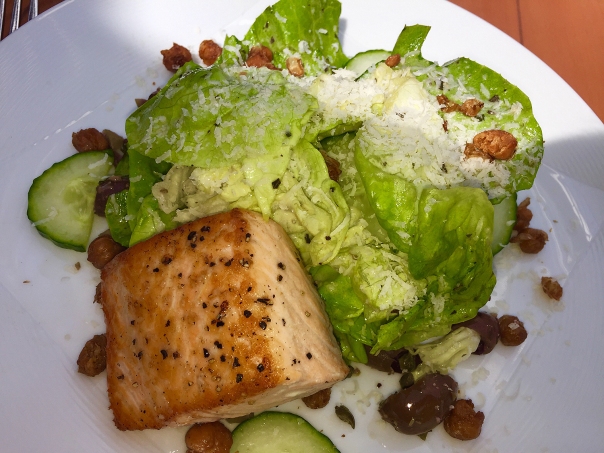 That evening for dinner, with Lisa gone, David, Russ and I hopped a cab (what an experience that was) to Monell’s at the Manor near the airport. David had a hankering for fried chicken and heard this family-style restaurant was the place to go. A slow night when we arrived (it was on the earlier side), they seated us immediately at a long farm table with one other couple from Kentucky. There were already a couple of bowls filled with a broccoli salad and a cole slaw which we eagerly dug into. The other couple realized we may be first-timers and warned us to pace ourselves as there was a lot more to come. 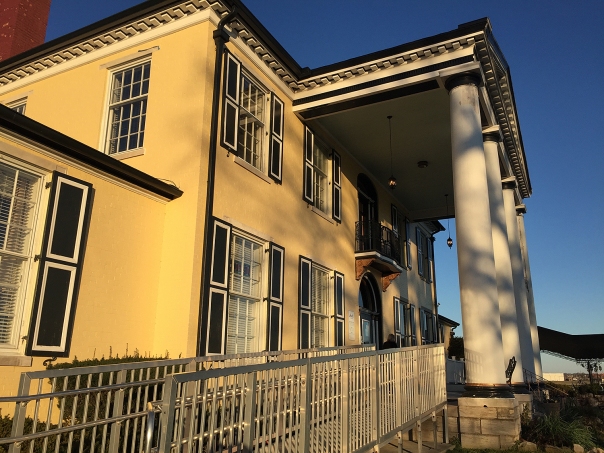 Boy they weren’t kidding! On top of platters of fried chicken, we also received mashed potatoes, green beans, sweet potato mash, corn-fritter mash, biscuits with honey and jam, stuffed shells (rather odd I thought), and a large bowl of banana pudding with cookies for dessert. For beverages they serve sweet tea, lemonade or water. We did notice a few wine bottles for purchase at the hostess station, but not until on the way out as we waited for our Lyft driver. 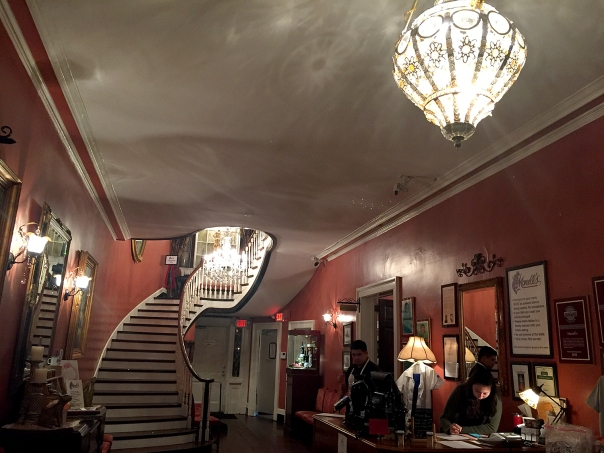 Above is the grand foyer where we waited for our ride back to the resort. I didn’t take pictures of the food as the family-style serving didn’t really lend itself to doing so.

OK, family-style is generally not my cup of tea, and this was no exception. The food was good, not great in my opinion, and I just think there is so much waste, but according to locals, there are often long wait lines. (They also serve breakfast, lunch, and host weddings and other special catered events.) BTW, our Lyft driver raved about Monell’s, go figure.

The final day of the conference ended in the early afternoon so we arranged for late check out and waited for Julia to pick us up after she left work from Vanderbilt Medical Center. Now the real “Noshing in Nashville” would begin. Stay tuned for Part II coming soon…

1 thought on “NOSHville, Part I: Opryland.”