…. According to Zagat… And Fayette Street Grille is among the recipients of the 2017 Experts’ Choice Award—fewer than 2% of restaurants worldwide receive this honor! Who can argue with these accolades? Opened in 1998, Fayette Street Grille has proven their worth with consistently providing high-quality food and attentive service. The BYO with a three-course prix fixe dinner menu, an open kitchen, and a casually elegant atmosphere was perfect for an evening out.

Our friends Karen and Ed Mortka chose the establishment—somewhere between our two places of residence, because they had been there before to celebrate their anniversary, and loved it. And we’re always up for trying new restaurants, especially BYOs with great ratings. We were more than willing to make the 35-minute road trip.

Located in a small brick building in the heart of Conshohocken on Fayette Street, arriving practically at the same time, we found street parking directly in front. Since it was on the early side (for us anyway), inside there were many unoccupied tables and a smattering of high tops, but as the night wore on the place filled up, and the noise-level rose quite a few decimals.

It had been a while since the four of us got together so we chatted and sipped wine for about a half hour before we put in our food orders. Their three-course meal includes a half dozen choices under each header beginning with Starters, followed by Entrées and ending with Desserts. Once we made our choices, a basket of warm, crusty, toasted bread (always a good sign of things to come) arrived at the table and we continued the conversations.

All of the listings were tempting so it took a while to finalize our choices. Ed and I were on the same page with Starters as we both chose the Beef Kabobs skewered with seasoned, grilled medium-rare beef cubes, bell peppers, mushrooms and yellow squash then topped with a sesame-wasabi vinaigrette and microgreens. While I did think the kabob was good, the dish wasn’t over-the-top thrilling for me.

But Russ and Karen couldn’t say enough about their selection of Mushroom and Crab Ragout containing seasonal mushrooms, crab claw meat, chopped garlic and fresh parsley tossed in a roasted vegetable veloute and gorgeously plated in a phyllo dough cup with a pop of microgreens.

For entrées we all went a different direction, although it wasn’t an easy choice for any of us because everything sounded delicious. However, I pretty much knew Russ would get the Port Wine Braised Shank of Lamb which was accompanied by braised red skin potatoes and braising vegetables plated on a bright yellow dish. Did he love it? You betcha!

The Mediterranean Bass Blanco was calling my name, and I am sooo glad to have chosen it as it was one of the most sublime pieces of fish I’ve ever eaten—no doggie bag for me! The shallow poached bass was served over a pillowy lemon-thyme risotto, and finished with a seafood bechamel and a side of roasted green beans. OMG, I think I died and went to heaven!

Karen elected to try the Seared Ahi Tuna, something she said she’d never had before. The ample portion was seared rare and placed onto a pineapple and sage risotto with those same roasted green beans, then all finished with an orange-sesame vinaigrette. Let me just say, that we all cleaned our plates, with no leftovers what-so-ever… 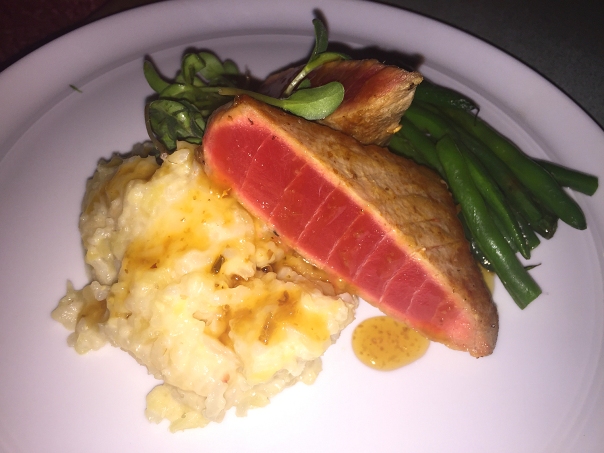 Not to be outdone, Ed ordered the Shrimp Monsignor (now how did it get that name?) which was sautéed with shiitake mushrooms, diced tomato and basil, ladled over a bowl of penne in a light seafood broth. The added microgreens did not thrill him, so wife Karen was the recipient of that ingredient.

Since dessert came with the meal, everyone ordered, although I took my Chocolate Gateau served with Mint Creme to-go. (We hosted a brunch for 7 the next morning and everyone had a taste.) As with the Starter, both Russ and Karen chose the same Apple Crisp served with Vanilla Ice Cream. Ed on the other hand opted for the Saint Louis Butter Cake with Strawberries. BTW, all desserts are prepared in-house. 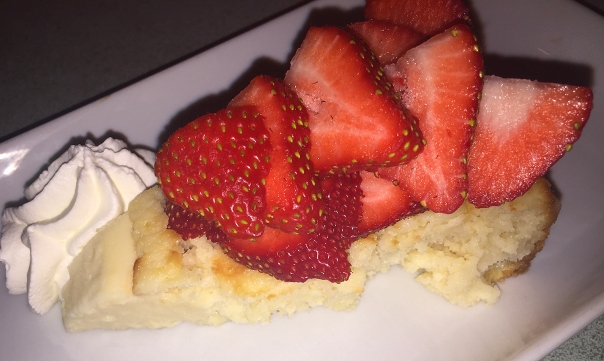 The pace was very leisurely and we never felt rushed. In fact, even after dessert we continued chatting and before we knew it, it was over 3 1/2 hours since we sat down! While it is not exactly in our back yard, we know for sure we’ll be making another road trip to Fayette Street Grill.