Not surprisingly the historic Black Horse Tavern on State Street in Newtown closed—it was about time! Mishaps occurred on our last two visits—one incident involved spilling an entire glass of red wine on Russ. Red flag number one. But accidents happen, right?

Red flag number two occurred on our follow up visit as we sat starving and waited over an hour for our dinner to arrive. To everyone’s shocked dismay, the chef came out of the kitchen and started break dancing in the dining room, kid you not! To appease the disgruntled diners, they plied us with several glasses of free wine. (I think the chef plied himself with several free glasses too.) Neither scenario left us wanting to return for more. And online comments from other patrons left similar scathing reviews.

Luckily, in late August of this year, it opened under new ownership as the Thyme Bar & Grill, and we were game to try it out. Their menu includes lunch and pub fare with crab towers, ahi tuna, lobster roll, duck quesadillas, as well as burgers, truffle fries and wings; while dinner options range from jambalaya, sea scallops and rack of lamb, to king crab cakes and pork chops.

We were seated at a two-top next to a wall in the crowded upstairs dining room. It had been redecorated in soft gray tones with gauze fabric and tiny lights undulating through the rafters. The old stone fireplace prevailed and remains a focal point along with a large gilded mirror on the back wall.

The waitstaff was very attentive, although you could tell they were still smoothing out the kinks toward becoming a well-oiled machine. Our chosen bottle of red wine was not in stock, but we were given an upgrade to a pricier selection—a nice touch indeed.

For starters we enjoyed one of three choices of Flat Breads. Ours came topped with Boursin cheese, baby arugula, garbanzo beans and Kalamata olives. I must admit, I was a bit concerned about chickpeas on my flatbread, but it was very good; and the arugula added a nice peppery bite. Our one criticism would be the bread itself was slightly thicker than we prefer.

Luckily, there was no lapse in service under the new ownership. Our entrées arrived shortly after consuming our appetizer. Russ loved his perfectly cooked to medium-rare Twin Filets topped with sautéed greens and crispy herbed potato croquettes, resting on a bed of their silky house steak sauce. 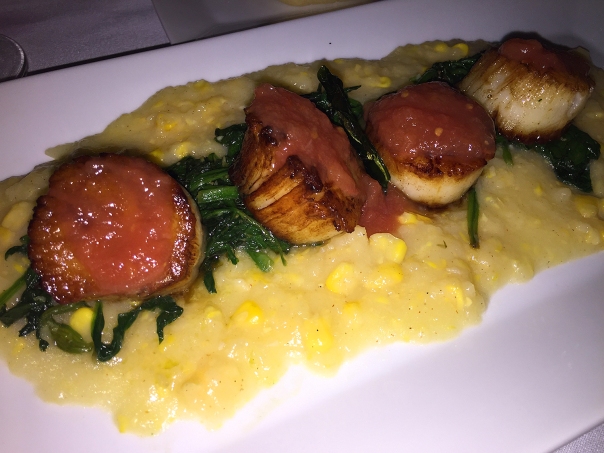 I was in a seafood mood and finally settled on their Seared Sea Scallops that came plated floating on a puddle of creamed sweet corn, tomato jam and braised greens. While it may not seem like a whole lot, I was pretty full from the flatbread and took half of my meal home—which made for a perfect reheated lunch a few days later.

This “Thyme” the dinner was a winner!