Autumn was right around the corner, and it was a beautiful and warm evening when we hosted an end-of-summer, al fresco BBQ. The party started with some appetizers on the patio, namely the simple-yet-elegant Gambas al Ajillo in a cazuela, compliments of Russ. The other two appetizers arrived via Rosanne. The Pea Pesto Crostini (recipe courtesy of Giada De Laurentiis) not only was gorgeous to look at, but tasted great! And her yummy little skewers were a mix of spicy sausage, and sweet for those with a more delicate palette. 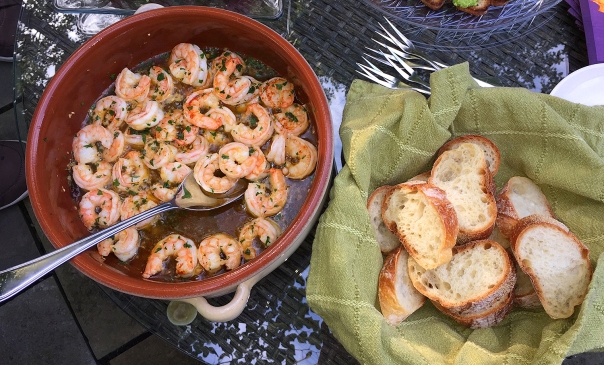 A sliced baguette is a must with this sizzling garlic shrimp dish to mop up all of the luscious EVOO.

One of the guests was originally going to bring dessert, but the couple had to back out so Russ did a little online investigating and found this Lemon Posset with Berries on the Cook’s Illustrated website (recipe follows). The description of a silky, rich British dessert with bright citrus flavor caught his attention. The fact that there were only four ingredients made it that much more appealing.

Wendy and Rosanne keep me company in the kitchen as I prepare the Mexican corn dish.

According to Wikipedia: A posset (also historically spelled poshote, poshotte) was originally a popular British hot drink made of milk curdled with wine or ale, often spiced, which was often used as a remedy. In the 16th century the drink evolved into a cream, sugar and citrus-based confection, which is still consumed today as a cold set dessert—somewhat like a cross between custard and pudding. 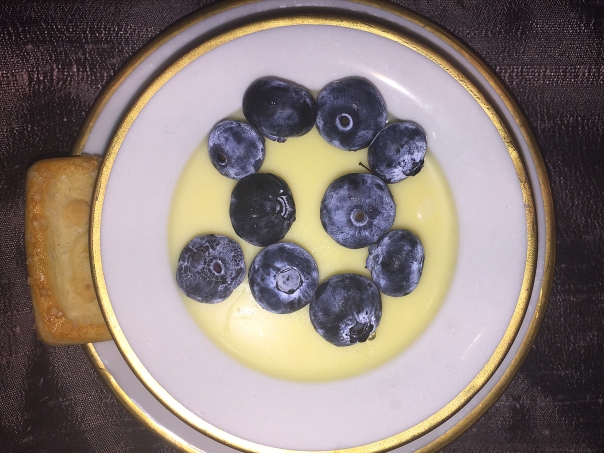 Add a small shortbread cookie on the side for some crunch factor.

Using just the right proportions of sugar and lemon juice is the key to custard with a smooth, luxurious consistency and a bright enough flavor to balance the richness of the cream. Pairing the dessert with fresh berries for textural contrast helps keep it from feeling overly rich. One reviewer commented he added a pinch of Moroccan mint and a star anise pod, claiming the subtleties were delicious and totally complimentary to the lemon—although we did not include those touches.

Zesting and juicing the lemons for the posset.

Before dessert however, we enjoyed a main course of Cedar-Planked Salmon with Lemon Pepper Rub, Mexican Corn and Wendy’s cheerful tossed salad brimming with lots of healthy ingredients and containing almost every color in the rainbow.

A side of horseradish chive sauce is served with the salmon.

*This dessert requires portioning into individual servings. Reducing the cream mixture to exactly 2 cups creates the best consistency. An easy method is pouring 2 cups of water into your saucepan first. Measure the water height with a wooden skewer, making a notch at that point. Bend the tip at the notch. Pour out the water, bring your ingredients to a boil, checking the depth after about 8 minutes. Continue boiling until the desired depth of 2 cups is reached.

Footnote: We made another Posset the following weekend for more company. It was lime-based and topped with fresh raspberries, shown below.