Arguably the greatest Spanish food is found not in the nation’s restaurants, but in private homes off-limits to tourists, where women still cook the recipes their mothers and grandmothers cooked before them. Penelope Casas takes us into those homes to uncover the secrets of this simple, easily reproduced, and altogether marvelous cuisine. For La Cocina de Mamá, she has collected recipes from great chefs and traditional home cooks in every region of Spain. 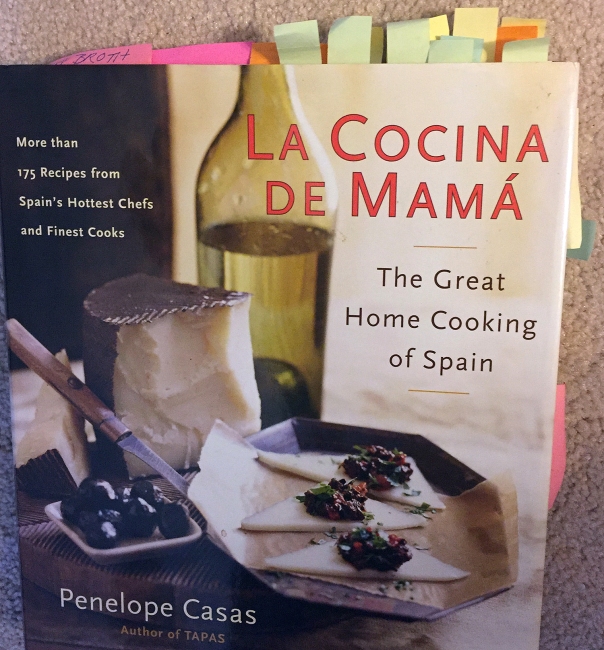 Having been enamored of her recipes and side stories since we bought the book a number of years ago, this Chicken with Ham, Olives and Sherry was one entrée we hadn’t tried yet. But since making it, it has risen to a top-contender spot when poultry becomes the meal of choice. The ingredients list does mention you can substitute prosciutto for the Serrano ham, but if at all possible, use the Spanish version.

About the Serrano Ham: The word Serrano means “from the mountains,” and refers to the cool dry climate necessary to cure hams in the traditional way. Today most moderately priced cured hams are produced in plants that simulate mountain conditions. Top of the line cured hams, called Jamon Iberico (not as yet imported to the United States) are in fact, naturally mountain cured and come from the extraordinary native Iberian pig.

The best cured ham sold in the United States today, according to Penelope (far superior to prosciutto), is the Redondo Iglesias Serrano ham that is imported from Spain and available from Tienda.com. We were able to order a thick slice (shown below) at our local upscale supermarket deli. Beware, the price is nearly $25 per pound, but you only need about a quarter pound.

The chicken dish paired fabulously with Penelope’s recipe of Sherry-Infused Baked Sliced Potatoes which take a similar amount of time and get cooked in the oven while the chicken simmers on the stovetop.

To complete the meal, we added a side salad for more veggies and fiber.

Chicken with Ham, Olives and Sherry

1 thought on “Oh Sherry, Sherry Baby—Sherry Can You Come Out Tonight?”