If you’re a fan of shrimp that’s slightly spicy and you want it quick, this Sautéed Shrimp and Pancetta with Cheese Grits is for you. Russ double-starred this recipe it was so good. It all comes together in about 15 minutes—unless of course you have to behead, shell and devein the shrimp as I did. But we buy them whole on purpose so that we have the makings for seafood stock sometime in the future. Just bag the stuff and freeze until ready to make homemade stock—you won’t regret it.

If you can’t find quick-cooking grits, you can use quick-cooking polenta instead—just be sure to follow the package’s instructions for the correct cooking time and the amount of liquid needed. With an inclination for polenta over grits, that’s what we made. And since I had a few ounces of two different cheddars, I incorporated both a white and yellow cheese.

The one instruction that baffled us was cutting the pancetta into 1″ strips. First of all it doesn’t stay in strips and we think a more uniform dice would distribute the pork more evenly around the dish. Truly doesn’t matter, the taste is there… 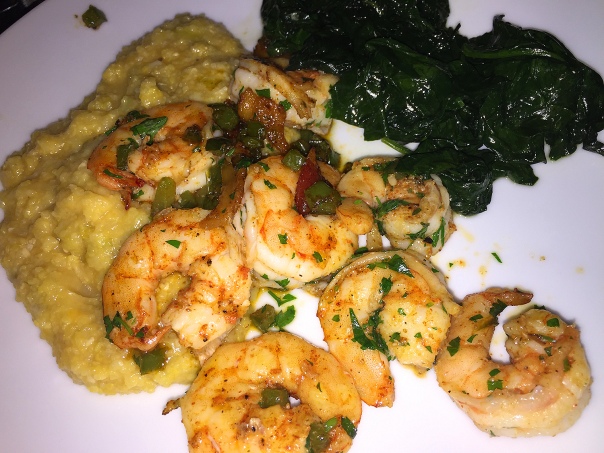 Serve with a side of collard greens or sautéed spinach.