Manchego Cheese Canapés with Olives and Piquillo Peppers is an extremely easy tapas to assemble, no cooking required and can be served at room temperature. It comes straight from El Corregidor, the most delightful bar and restaurant in the La Mancha region of Spain. “It is where Manchego cheese is made and windmills from the times of the errant knight Don Quixote still stand.”

In early October, I started my Master Gardener’s Certification course which meets every Thursday evening for 6 months. We were required to sign up for appetizer duty on at least one of those evenings, and I chose the fourth class.

A few years back, Russ had made this tapa for a party and everyone loved them, so I decided the three-step recipe was easy to make ahead of time and transport via car for the 40 minute ride. QUESO MANCHEGO con ACEITUNAS y PIQUILLOS comes from one of our coveted cookbooks, La Cocina de Mamá by Penelope Casas—a great home-cooking chef author from Spain.

Counting the class instructors, there are 30 people at each session, so I bought two wedges of cheese which sliced down to 16 wedges each. Since I doubled the cheese, I thought I should increase the olives, peppers and anchovies by about 50%—which ended up unnecessary, as there was a lot left over. (Although it added boatloads of flavor to a pasta sauce a few nights later!)

We usually always have a jar of piquillo peppers imported from Spain on hand, but apparently ran out without realizing it. The grocery store only had jarred piquillo pepper tapenade, so I went with that. It worked our perfectly, but I omitted adding any additional olive oil since the tapenade already had some in it.

To counter balance the savory Manchego wedges, I also made another slightly sweet tapa. About a year ago I blogged this recipe for Dried Fig, Goat Cheese and Candied Pecan appetizers. As I mentioned then, they’re fashionable, easy to construct, and require no cooking. For a final flourish, drizzle with a balsamic glaze, or perhaps honey, and Voila you just made and elegant and easy appy. 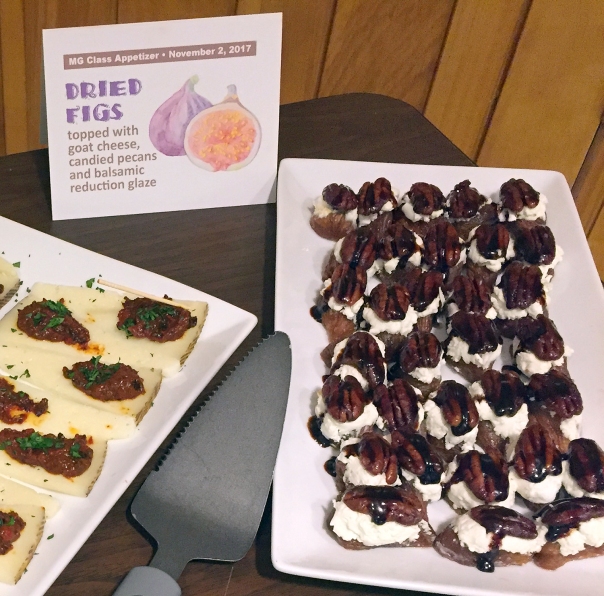 I also want to give a shout out to my classmate George, who also had to bring in some edibles. He delivered a beautiful presentation with a crudité platter and another with an assortment of spreads, crackers and pretzels. There was nary a crumb left on any of our platters. I think we may have raised the bar for the following group 😉 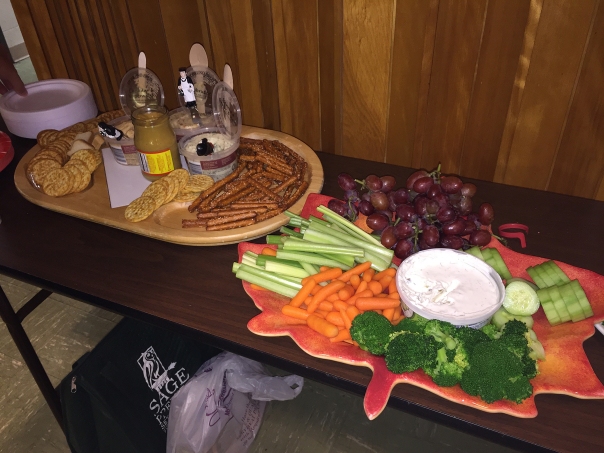