With the BIG SIX-ZER0 looming over Russ, and family coming in from the West Coast to help memorialize the occasion, hubby was in a tizzy on where to make reservations for his celebratory birthday dinner. Over the last couple of years we’ve been stockpiling articles on well-rated establishments—many of the farm-to-table persuasion. So after some “agonizing” research… 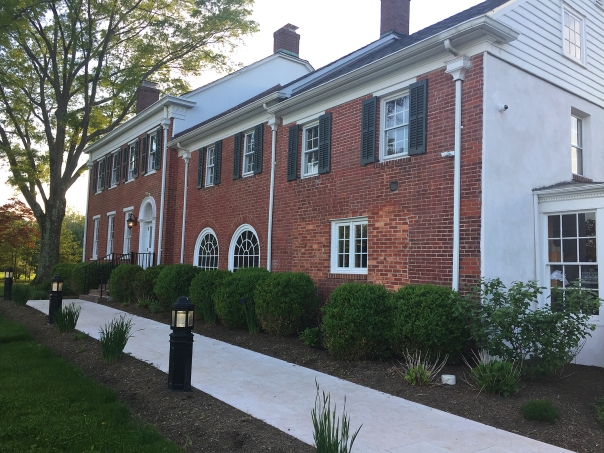 A truly authentic farm-to-table dining experience in an 1800s Hopewell farm house, the Brick Farm Tavern at Double Brook Farm is a new breed of “gastro-farms,” where the restaurant is physically on the homestead grounds. The restaurant’s partners, Jon and Robin McConaugh, who previously worked on Wall Street and in sports media, relocated in 2004 from New York City to Hopewell to farm.

It all started with one cow and grew out of the desire for the McConaughy’s to know where their food comes from. From that first cow in 2004 to today’s fully operational working farm raising pigs, sheep, chickens, turkeys, goats, cows, and ducks the couple have never lost sight of what mattered most in their operation: humane and ethical animal treatment, energy sustainability and keeping it local. The animals are raised on pasture, never given hormones or antibiotics and harvested at an on-site abattoir.

We arrived at dusk to a well-manicured, stately brick exterior that opens into a series of rambling farmhouse rooms with original wood and stonework that have been beautifully refurbished. After handing over the car to the free valet service, we were given a choice of al fresco seating on their outdoor patio, or inside. We barely hesitated before choosing to stay indoors given the temps had soared to 97 earlier in the day.

The bar features local craft beers, artisanal cocktails and wine tastings—guided by their sommelier. Although when our waitress sent over the sommelier to describe our choice of red, his geography of the region of Spain was way off—we know because we traveled those areas in the past. Nonetheless, it was a very good red.

Wednesdays are half-price bottles of wine night, so we lucked out! 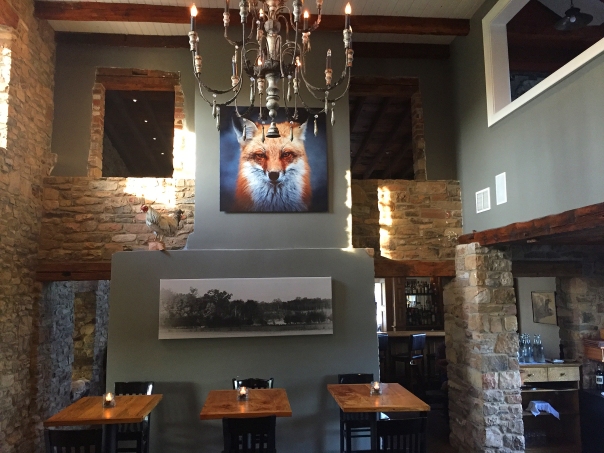 Off the front vestibule is a casual, cozy bar where the high ceiling and stone walls evoke a corporate retreat lodge. We wound our way through it and around into a more elegant dining room with a fireplace, which is where we were seated at a four-top in a cozy corner. FYI, Brick Farm also offers a less pricey bar menu if you so desire. 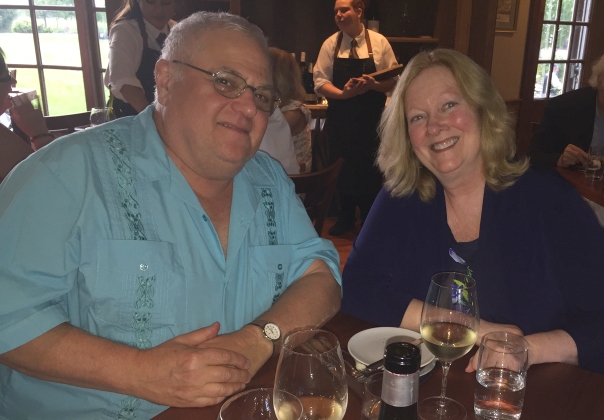 Lynn and Russ getting cozy at the corner table.

After the wine was served, we were treated to an amuse-bouche of pickled carrot, shaved radish, and celery root purée on a small curved spoon.

With an annual production of 15,000 free-range chickens, 2,000 ducks, 500 Berkshire pigs, and 500 sheep, as well as goats and turkeys, not to mention the Devon beef cattle they own that are grazing on the grassy acres at Thistle Creek in Central Pennsylvania, this restaurant is one of the most self-sustaining, closed-loop food projects in the region. Almost 100 percent of the proteins are grown on site (as they’ve done away with seafood), as are most of the vegetables, the cherry and hickory wood for the grill, and some hops and grain that is used at the brewery (Troon) and distillery (Sourland Mountain Spirits) opened on site.

Their best dishes are ultimately classic French ideas reimagined with a contemporary flair that highlight the prime ingredients. Our feast commenced with a board laden with homemade, whole grain bread from the Brick Farm’s sibling market-bakery-butcher-shop in downtown Hopewell. Seeing as how it was Russ’s birthday, he decided to get three courses starting with the very tasty Berkshire Pork Country Pâté, which he generously shared with all of us—and much to our delight, came with the same crusty bread, but toasted. 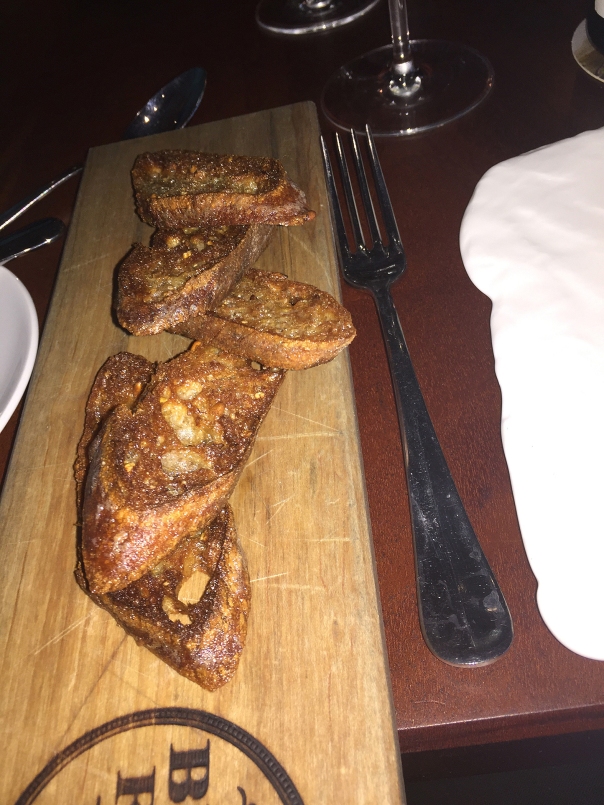 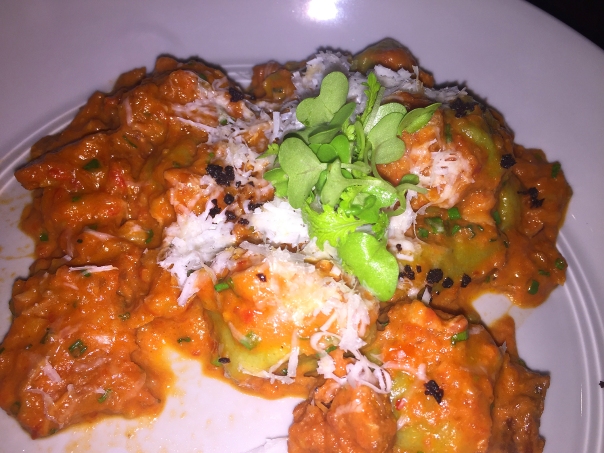 David, Russ and I all opted for the Whole Wheat & Wild Ramp Gnocchi Bolognese small plate, and we all concurred it was beyond fabulous! Not normally a huge gnocchi fan, these babies were so light and flavorful and paired perfectly with the tri-meat bolognese sauce—lamb, beef short rib, Berkshire pork—and chopped nicoise olives, every silken mouthful was heavenly. Hands down, my favorite dish of the night.

The guys copied me once again with our choice of entreé: the tender medallions of Double Brook Katahdin Lamb, cooked to a perfect medium-rare and lightly drizzled with a cassia lamb jus. The tomato compote topping cast a memorable Mediterranean mood alongside the chaw of king oyster mushrooms, minted English peas and spinach and ricotta purée.

Sister Dee decided to go a different route and ordered the Berkshire Pork with Hakurei turnip, Hen-of-the-Woods mushrooms, sweet potato, and fried black rice, all delicately topped with a pork jus. No complaints from her… 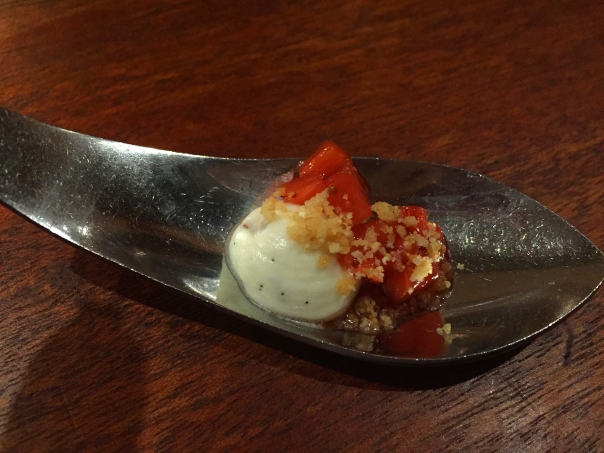 This was a first, and unique touch—a dessert amuse-bouche! Served on the now familiar curved silver spoons, the combination a startling blend of pickled strawberry, Chantilly cream and almond streusel, well done, Brick! 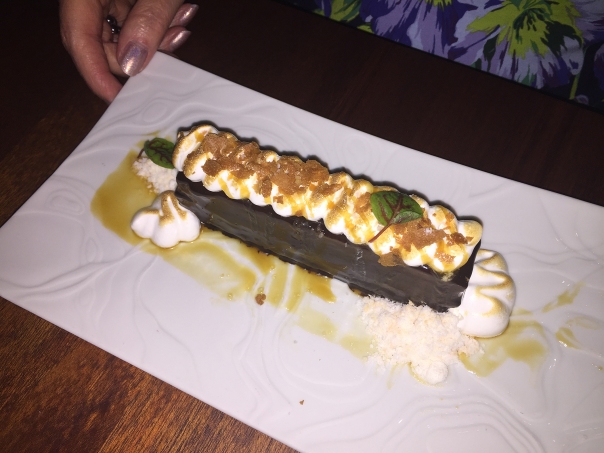 Both Russ and sister Dee were dessert-determined and Ana Musial’s desserts are just as evocative of the season and place as the savory courses. The Chocolate Gateau was Dee’s choice, one she said was the best chocolate dessert she’s ever had! It was a work of art on a plate as the cake was adorned with toasted Italian meringue, bourbon caramel and feuilletine (feuille means leaves) which tastes like crispy, thin little shards of sugar cone.

The staff knew it was Russ’ birthday so on his Coffee Brulée they added a lit candle and scripted birthday wishes in chocolate directly on the plate. The ensemble included pieces of lady finger, ricotta cream, coffee pearls, espresso and chocolate tuile—named after the traditional curved roof tiles (tuile is French for tile) seen in France and elsewhere in the Mediterranean.

There were plenty of worldly after-dinner drinks to choose from, so instead of dessert I had to have the “Last Word”—an artisanal cocktail composed of gin, green chartreuse, luxardo and lime juice, divine!

Fans of farm-to-table dining will find themselves very much at home at the Brick Farm Tavern, which strives to be as self-sufficient as any farm of 150 years ago. If you choose to go, reservations are strongly recommended, as this is a restaurant that has been filled with loyal customers since its opening. We are now glad to be considered patrons!