At first, it may seem like the French and the Irish have little in common, but the two peoples have been allies for centuries. So it’s no wonder they share the passion for food and drink, and no wonder their cuisines pair splendidly. This recipe is a celebration of Franco-Irish relations: Daniel Boulud’s Corned Beef and Cabbage.

Our most recent culinary acquisition was Mr. Boulud’s “Braise” cookbook and this was the first recipe we tried. The timing couldn’t have been more perfect as it was St. Patty’s day weekend—when corned beef and cabbage reign supreme. It cooks for several hours so it’s not quick weeknight fodder, but you’ll be hoping there are leftovers.

At the grocery store there were only three rutabagas available, all about the size of bowling balls! Needless to say, they were too big, so we bought an extra turnip in its place. And one small parsnip just doesn’t cut the mustard. By the time you peel it, do away with the very narrow end and remove the woody core, you won’t have but a scant few pieces, so we included three parsnips. Not to question an international chef, but just sayin’… 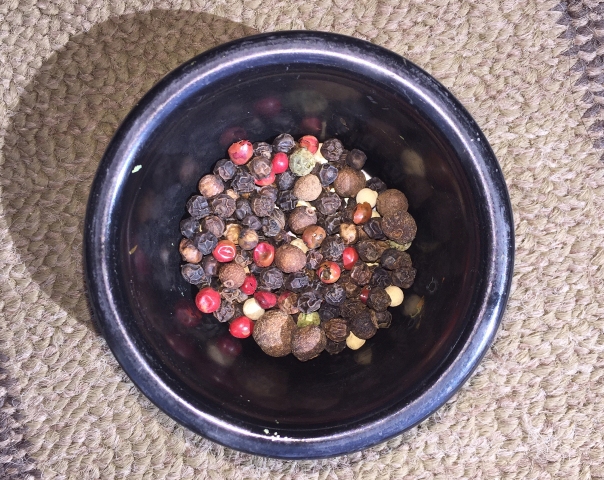 And alas, after trying to locate pink peppercorns at three different stores, we came away empty handed. We’ll order some online for future use, but in the meantime we used mixed peppercorns which appeared to have some pink ones in it, above. As lucky charms would have it, we had a hunk of fresh horseradish in the vegetable bin for the cream sauce, although I think it may lost some of it’s oomph because we felt we needed to add some prepared horseradish to give it the kick we wanted.

The top photo shows the ingredients before the horseradish cream sauce is mixed together, bottom.

Russ planned on making homemade chicken stock the same afternoon for some upcoming meals, and when he realized we needed beef broth for the corned beef recipe, he picked up some leg and neck bones and whipped together that broth too—easy to do with a pressure cooker—and what a difference it makes compared to bland boxed or canned. It’s a double strength recipe that you dilute by half when measuring so it goes a long way and is worth the effort.

These three pics show some of the ingredients to make homemade meat broth, although it’s not necessary to make it for this recipe.

Once we had all of the cut veggies, cabbage-wrapped meat and broth all in the pot, there was nary an inch of room left. Russ actually added a sheet of parchment then put a large cast iron skillet on top of the lid to make a tight seal. After one hour we took it out of the oven to baste it, and it hardly seemed like it cooked at all, although things were hot.

After 3 hours I removed most of the liquid from the pot into a smaller pan, covered the meat pot back up and returned it to the oven while I reduced the sauce. Even after reducing by over half at a vigorous boil for 25 minutes, the sauce remains thin, but it is much more intensely flavored.

An Irish Blessing: “May your home always be too small to hold all your friends.” 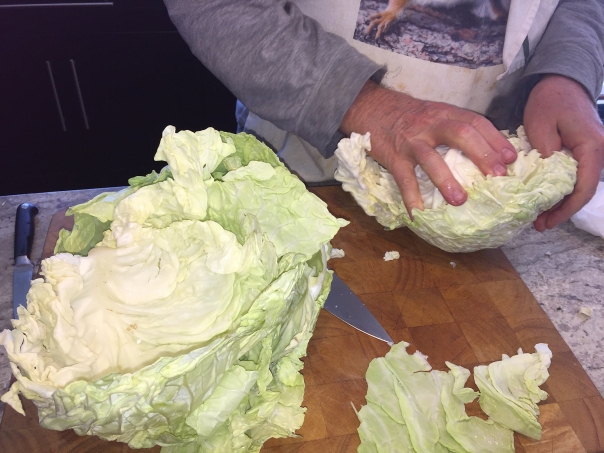 Russ starts separating the cabbage leaves from the head. Once he got to the inner leaves, Russ just cut them down into wedges to place around the meat with the other veggies. 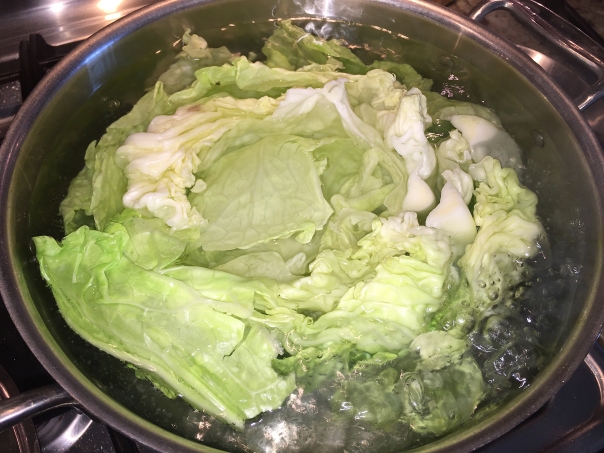 The individual cabbage leaves are added to boiling water for 4 minutes.

After boiling, the leaves are added to an ice bath.

Put the corned beef in the center of the leaves, then top with the remaining half. 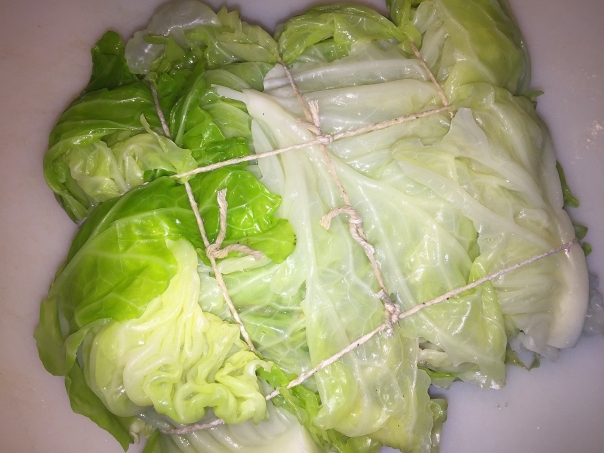 Wrap the cabbage leaves around the corned beef and tie securely with kitchen string, or do the alternative method in Step 4.

The braising pot is completely full before we put parchment and a lid on it.

We only basted twice during the 3 1/2 hours of cooking. 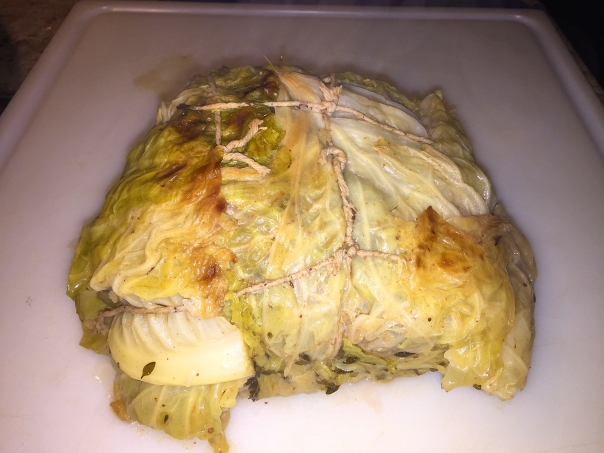 Once the meat packet is removed from the pot, cut away the strings.

Russ sliced the moist meat right through the cabbage covering.

The sliced meat and veggies are arranged on a platter before bringing to the table.

Originally from Lyon France, Chef Daniel Boulud is widely celebrated as one of America’s leading culinary authorities. Since arriving in New York City in 1982, he has continually evolved his cuisine and expanded his reach to properties across the U.S., as well as London, Toronto, Montreal and Singapore.

His culinary empire has brought him many accolades, yet his inspiration remains grounded in the rhythm of the seasons. From his Michelin-starred flagship, Daniel, to his properties across the globe, Boulud’s signature remains the contemporary appeal he brings to soulful dishes rooted in the French tradition.

*PINK PEPPERCORNS: Peppercorns come in different colors and tastes. Pink peppercorns are not true peppercorns, but are the ripe berries of the Brazilian pepper tree. They are used as a spice and have a lighter pepper-like taste, with a pungent, piney, sweet flavor.