Sweet caramelized onion and creamy cheese tame radicchio’s bitter nature in this wintertime pasta of Penne with Ricotta, Caramelized Onion, and Radicchio from Fine Cooking’s Make It Tonight series. The impetus of this dish was we had about one cup of some really good fresh ricotta leftover from another meal a few weeks back, and we wanted to use it up before it went bad. The directions state that it takes less than a half hour to make, perfect for a quick weeknight meal.

However, and this is important, you can’t caramelize onions in six to eight minutes! They usually take 45-60 minutes over a low heat to render sweet, tender, golden onions that are not crispy. I made mine the night before while tending to other things, then threw them in the skillet the next evening toward the end of cooking the radicchio. So, just in case it didn’t sink in: Caramelization takes time. Don’t take them off too early—then, you’re “blonding” them instead of actually caramelizing them. They should be a rich brown, much reduced from where you started, and very soft but not quite mushy. 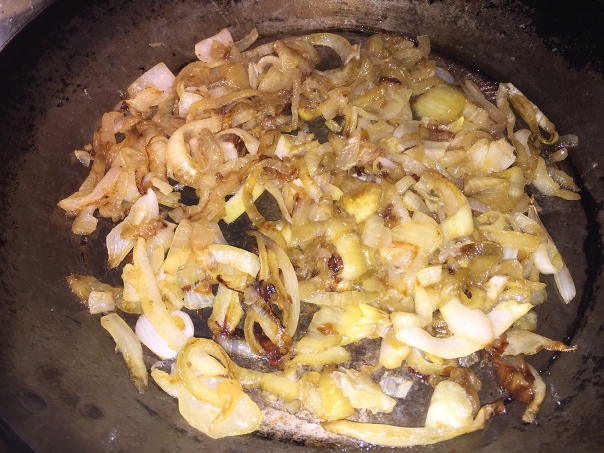 This was about 40 minutes into cooking the onions for an hour the previous evening.

Another real treat in this dish was the fried capers, which also make a great garnish for soups and salads. They added a crisp jolt of brightness to just about every bite. The ingredients called for “large capers” so that’s exactly what we bought—according to the label on the jar. We’re pretty sure though, based on their photo, that what FC meant was large “caper buds” as opposed to the larger “caper berries.”

The plant is a spiny, trailing, deciduous shrub native to the Mediterranean. It prefers warm, humid climate and grows in abundance all over the Cyprus, Italy, Greece, North African and some Asia Minor regions. The shrub begins producing flower (caper) buds from the third year of plantation.

Caper berries look like an olive; and are oblong. They’re much bigger than a caper bud, and have a similar taste and are treated in a similar way. Not quite as intense-tasting as the caper bud, they have a very similar flavor that is really quite delicious. In the commercial practice, capers are categorized and sold by their size in the markets. Smaller sized buds fetch more value than large ones. 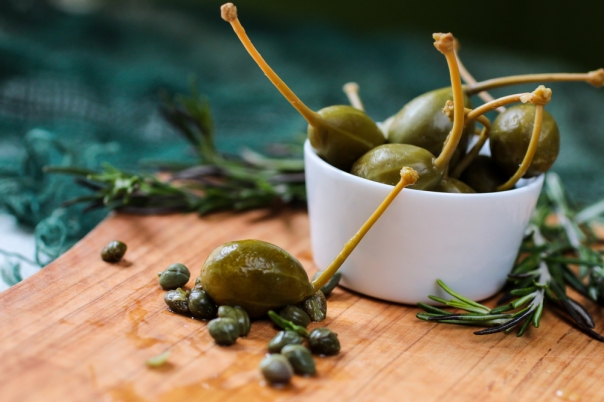 The difference in size between caper buds and berries.

Capers usually come in three sizes: small, medium and large. The downside with the larger ones is these are closer to springing open and becoming flowers. They are not quite as tight in texture, they’re not quite as firm, they have a flower inside them waiting to burst open. However, they have developed to the most gorgeous flavor. So I don’t think it really matters too much what size you use, it’s strictly a preference thing. 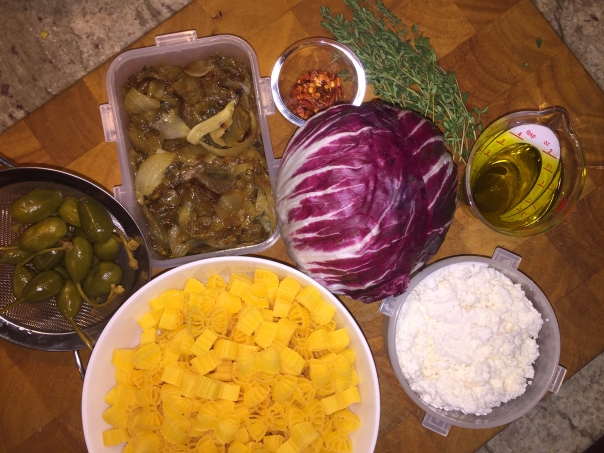 Slice each radicchio half into thin ribbons.

Fry your capers in oil with fresh time. We suggest NOT wiping out the skillet.

The capers and some of the thyme are moved onto a paper towel-lined plate.

Near the end of cooking the radicchio, we added the already caramelized onions to heat through.

Because we were shy about a half cup of ricotta, I added nearly a 1/4 cup of grated Parm with the reserved pasta water to thicken the sauce.

Instead of penne, we used a gluten-free farafalle pasta.

We paired our pasta with a side Caprese salad using heirloom tomatoes and fresh basil, a real treat in the wintertime!