Loaded with a lot of good-for-ya veggies, these Confetti Stuffed Peppers pack a tasty punch. Over the years, I’ve made all kinds of stuffed peppers. Sometimes I’d cut the pepper in half and mound the raw meat and rice mixture directly into the shell without precooking the ingredients. But that approach can be hit or miss when it comes to perfectly cooking the rice.

A bit of back story. I planned having a night off from cooking because we’d purchased some promising looking pre-made stuffed peppers at Costco the previous Saturday. Apparently the Food Gods had other ideas though, because on Sunday morning when I went downstairs, what do you think I found sitting atop the china closet?? Seems hubby put the package up there “temporarily” while he opened the basement door to tote groceries to the downstairs fridge, then totally forgot about them. Urrrgghh….

Believe me, we had some discussion about the feasibility of still serving them for dinner, but realizing they’d been sitting out for over 16 hours, we grudgingly came to our senses. With thoughts of agonizing stomach torture, or even a possible trip to the ER, our health meant a lot more than saving $15! (Did we really even give it a second thought?) So out in the trash they went, and onto the grocery list went the ingredients to make them from scratch. 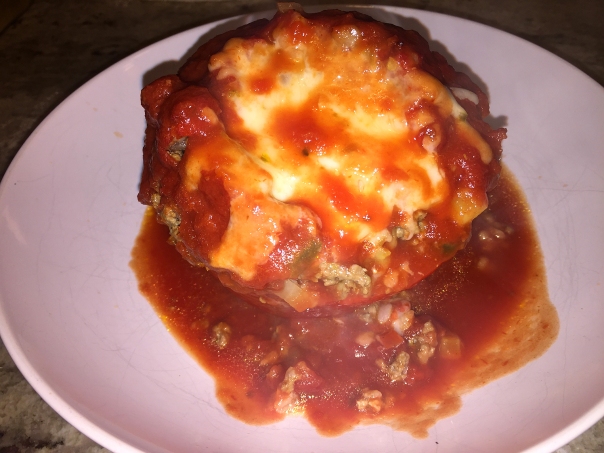 Let’s face it, there are as many ways to make stuffed peppers as there are to make meatloaf. But if, like us, you try to get in as many vegetables when preparing a meal, this recipe checks a lot of boxes.

Then there’s the debate about which rice to use, white or brown? There are pluses and minuses to each. The upside is, brown rice, unlike white rice, still has the side hull and bran. Other facts:

Alright, the rice choice is totally up to you and those who will be eating the stuffed peppers.

To make the meal more weeknight-friendly, I made the recipe on a Sunday afternoon up to the first line of Step 7, and then refrigerated them over night. It sure made for an easy dinner prep the next day. And because I had 1 1/2 cups of tomato puree leftover from another dinner, I mixed it with a small 8 ounce can of tomato sauce. Waste not, want not, right?

We did have nearly one cup of the meat mixture leftover after stuffing the peppers, so we just divvied it up between the two of us as a little snack while we were preparing other meals. Keep in mind, if you can’t buy large peppers, purchase 5 or 6 medium to small ones, otherwise you’ll have a lot of stuffing with no where to put it! 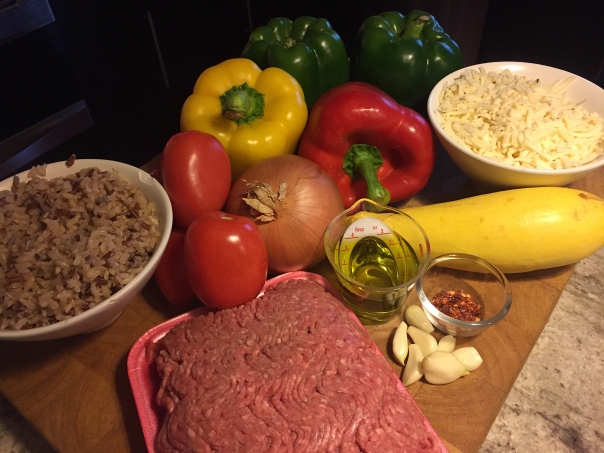 Slice off the top of the peppers and remove the stem. Finely dice the tops.

Place peppers in a pot that is high enough and roomy enough to fit them snugly.

After your ground meat is browned, place onto a paper towel-lined plate to remove any excess fat.

Wipe out the skillet and add the remaining olive oil. Add the onions and chopped peppers and cook until beginning to soften.

Next, add the garlic and zucchini/squash and cook for another minute. 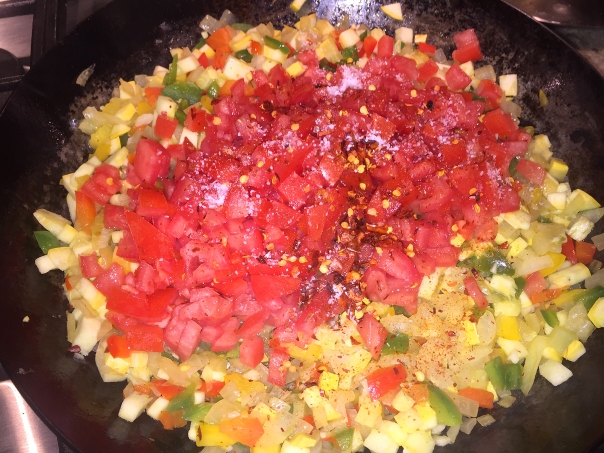 Next toss in the diced tomatoes and season with salt and red pepper flakes. Cook until everything is heated through.

In a large mixing bowl, add the cooked veggies, meat and rice, and stir in 1 cup of the cheese.

Pack the mixture into the pepper shells and mound the top. 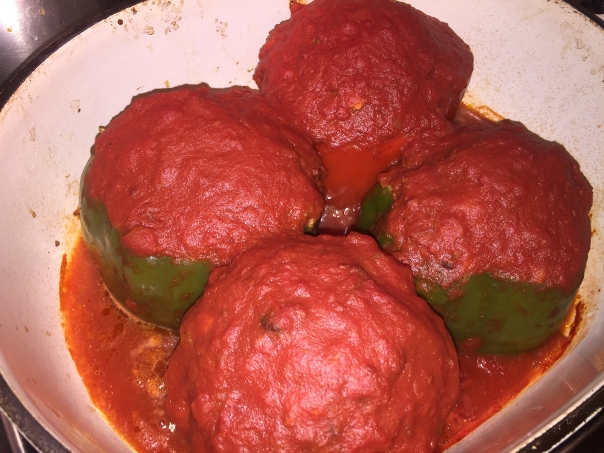 Before you top with tomato sauce and put back in the oven, siphon the moisture out of the bottom of the pot.

After placing a pepper in the bowl, top with more tomato sauce. 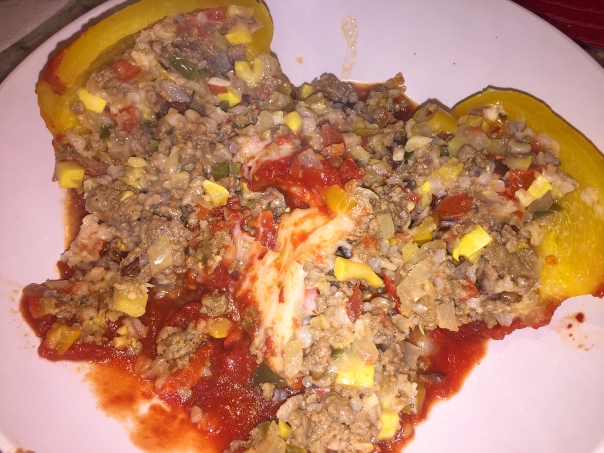 Sliced open, the meat and veggie mixture falls out with the oozy cheese.