I’m sure you’ve heard the old Aesop’s fable “The Tortoise and The Hare,” an account of a race between unequal partners. It’s a common folktale theme in which ingenuity and trickery are employed to overcome a stronger opponent. Well, in this recipe of slow versus fast, there is no clear winner.

Salmon with Lentil Hash and Bacon turns out great whether you take it slow with a hands-off approach or hit the fast-forward button and crank it out in mere minutes. How’s that? Choose to utilize a slow cooker versus a pressure cooker, but end up with the same luscious results.

In the January 2017 Better Homes & Gardens Magazine, there was an article “Slow vs. Fast” that highlighted several meals that could be cooked using either method, and this intrigued me. Keep in mind the techniques are not the same, and the instructions matter.

I would have initially chosen the pressure cooker if it had been a work night. But since I was off between the Winter holidays, I had time on my hands and decided to use our slow cooker. With this method you slow cook the lentils and vegetables on low for 5 to 6 hours (or 2 1/2 to 3 hours on high) and then place the salmon on top for another 25 minutes on high.

If using the pressure cooker, the salmon, spiced lentils, potatoes and cauliflower literally cook in 60 seconds of high pressure to give you a one-pot, one-step wonder in a snap! Next time we plan to use the fast method and see if there are any differences… stay tuned…

“Don’t brag about your lightning pace, for slow and steady won the race!” Not so in this case… for both methods you’ll want to embrace! 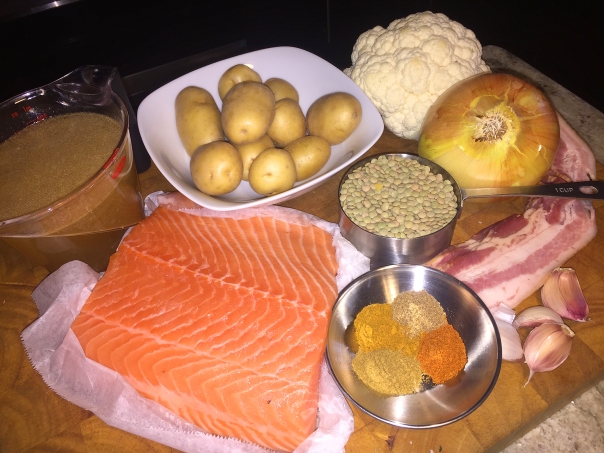 Fry up the bacon and when cool, crumble and set aside. 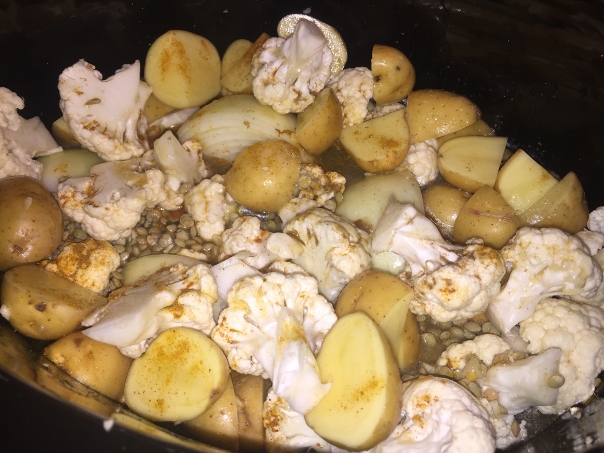 After the requisite amount of time for the veggies to cook, open the lid for the salmon.

Cut salmon fillet in half crosswise; season with salt and black pepper.

Place salmon on top of vegetable mixture and cover.

Cook about 25 minutes more, then divide salmon and vegetable mixture among serving bowls. 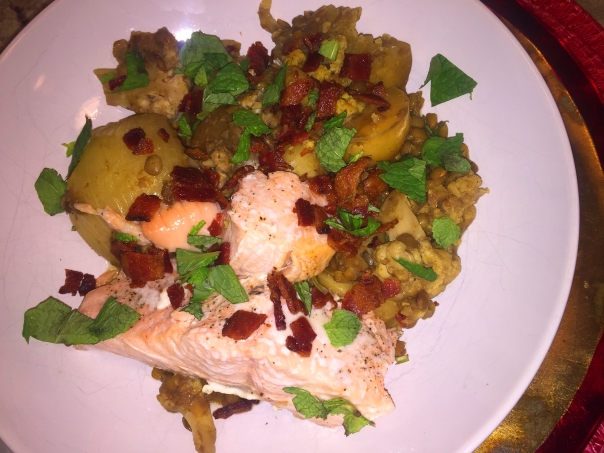 1 thought on “Choose Your Weapon: The Tortoise or The Hare”