Are you kidding me?? This was my initial reaction when I saw how easy this French Onion Roast Chicken recipe was. Just a few ingredients, with just as few steps, and the rest is literally hands off! I must admit, few dishes are as simple to make as this one—juicy roast chicken with caramelized onions made right in the roasting pan.

It seemed almost too simple, so I was half tempted to rub some olive oil over the bird and/or into the roaster and insert some herbs in it’s cavity, but I refrained because I wanted to see if the meal would come out as spectacular as advertised—and by jove, it did. Look at that perfectly browned crispy skin!

Cooking-wise, our 4-pound chicken took the full hour, and probably because I sliced up three large onions as opposed to two medium, they weren’t as caramelized as they should have been when the chicken was done. So I moved the chicken to a cutting board, tented with foil, then stirred the onions and put them back in the oven for another 20 minutes—which did the trick. 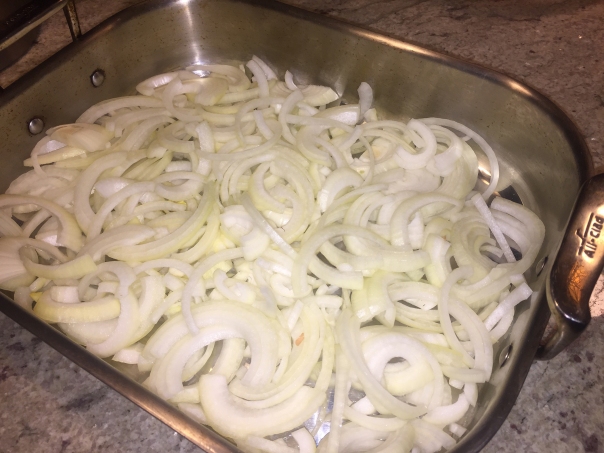 A bed of sliced onions line the bottom of the roasting pan. 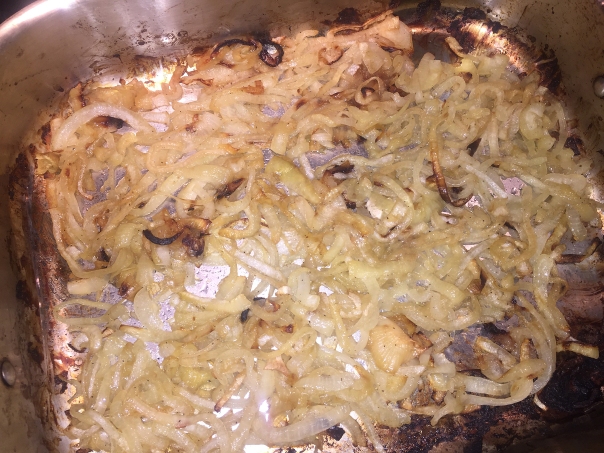 The onions took longer to caramelize once I removed the chicken, probably because I sliced three large as opposed to two medium onions. But as you can see, they shrink quite a bit.

A lot of juices released from the bird while it was being carved, so I poured those into the roasting pan with the onions and added the minced herbs, stirring it all together before plating. Wowser, they were heavenly, I’m so glad I made more than called for.

The rest of the meal was a breeze too because I just reheated a cheesy potato gratin and roasted a medley of brussels sprouts, butternut squash chunks and parsnip pieces tossed in oil, salt and pepper. Meal done!

NOTE: For a wine pairing, try a white Burgundy because both French onion soup and roast chicken are classic with Chardonnay, the same grape used in white Burgundy.

The onions are sliced in half through the root end; then each half is thinly sliced crosswise.

Place the seasoned chicken, breast side up, on top of the sliced onions.

After about 30 minutes, stir the onions. As you can see, neither the bird nor the onions are very brown at this point. 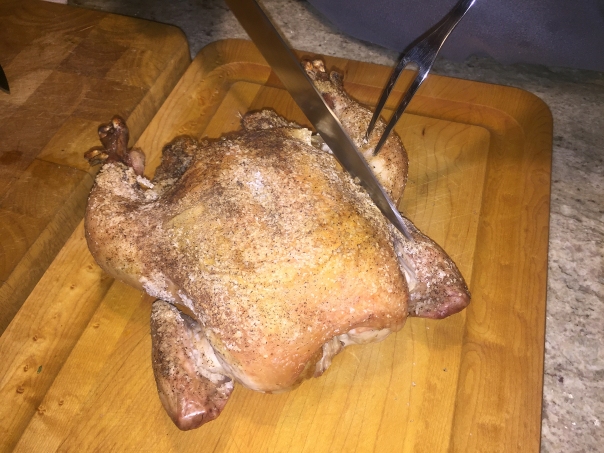 After the chicken rested, Russ started carving it on a cutting board with a moat to catch the released juices. 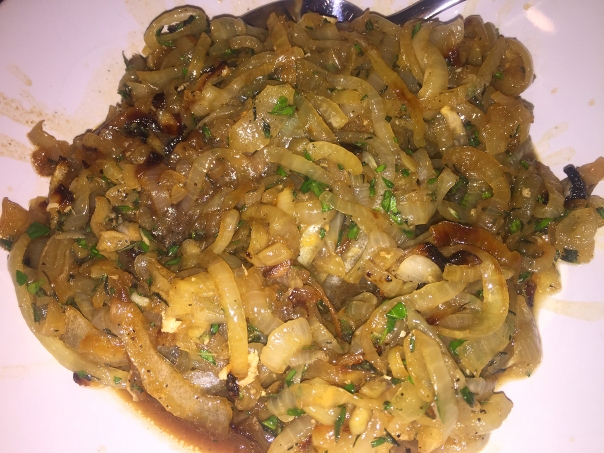 We poured those pan juices, along with the minced herbs, into the caramelized onions before plating.

Not usually one to eat the skin, it was so crispy and tasty, I couldn’t help myself.