This isn’t your grandma’s recipe, but an interesting twist on an old stand-by. My first recollection of Swedish Meatballs came by way of an occasional outing to a family-style smörgåsbord in Michigan when we were kids. Their’s (and most others I’ve tried since then) had more of a sweet note, which as a youngster with a sweet-tooth suited me just fine—certainly not my preference today.

If properly and traditionally prepared, they are considered part of an authentic Swedish meal. But we weren’t going for authentic. The impetus for this recipe came via a house party invite with a request to contribute an hors d’oeuvre. Russ remembered Cook’s Illustrated ran a recent article on holiday appetizers, and he had an “ah-ha” moment when he happened upon their Swedish Meatballs recipe.

Usually when making meatballs, or meatloaf, one is instructed not to over-handle the meat. But in this recipe, along with the ones we recently made for the Italian Wedding Soup, the meats and spices are to be ground vigorously in a stand mixer producing substantial yet delicate meatballs with a sausage-like springiness.

To achieve the right texture, we followed their technique that combines beef, pork, bread, cream—and a surprise ingredient—baking powder, which keeps the meatballs delicate and juicy. Although to make them less sweet, we eliminated the brown sugar from the meatball ingredients altogether, and reduced the amount called for in the sauce. (The following ingredients reflect these changes.)

For the meatball gravy recipe, we emulated their light cream sauce instead of the traditional heavy brown gravy. To get this, you add a bit of cream to the stock to lighten it up and a splash of lemon juice for some bright flavor.

Keep your fingers and palms moist so that the mixture doesn’t stick to your hands. 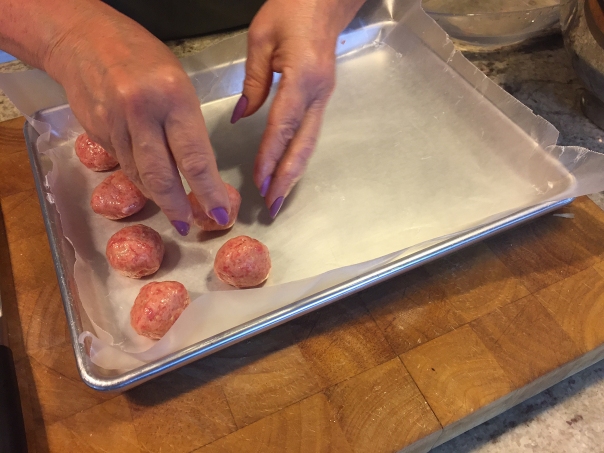 Wait until all of your meatballs are formed before starting to cook them.

Keep a bowl of water nearby and dip your fingers after every two or three meatballs to prevent the meat from sticking as you form the balls. Another trick, when ready to start cooking, is to start near the skillet handle, arrange the meatballs in a clockwise spiral to keep track of the order in which they need to be flipped.

A 12-inch slope-sided skillet can be used in place of the sauté pan (use 1 1/2 cups of oil to fry instead of 1 1/4 cups.) The meatballs can be fried and then frozen for up to 2 weeks. To continue with the recipe, thaw the meatballs in the refrigerator overnight and proceed from step 3, using a clean pan. Serve the meatballs with mashed potatoes, boiled red potatoes, or egg noodles, or simply as an hors d’oeuvre like we did.

BTW, “köttbullar” is the Swedish word for meatballs.

Instead of buying an entire loaf of gluten-free bread for just one slice (which we wouldn’t use the rest of) we thawed a roll from the freezer and removed the crust. The scraps went to the birdies.

After combining the bread and cream, use a fork to mash it until no large dry bread chunks remain.

An onion is grated on the large holes of a box grater.

In a stand mixer fitted with paddle attachment, beat pork (and other meats, if using), onion, nutmeg, allspice, pepper, salt, and baking powder on high speed until smooth and pale.

Add bread mixture with ground meat and beat on high speed until smooth and homogeneous.

Arrange meatballs in hot oil in a spiral starting at the handle.

After a few minutes, start turning the meatballs over beginning with the one closest to the handle.

Remove all the meatballs from the pan to a paper towel lined platter.

When the foaming from the butter subsides, add flour and cook, whisking constantly, until flour is light brown. 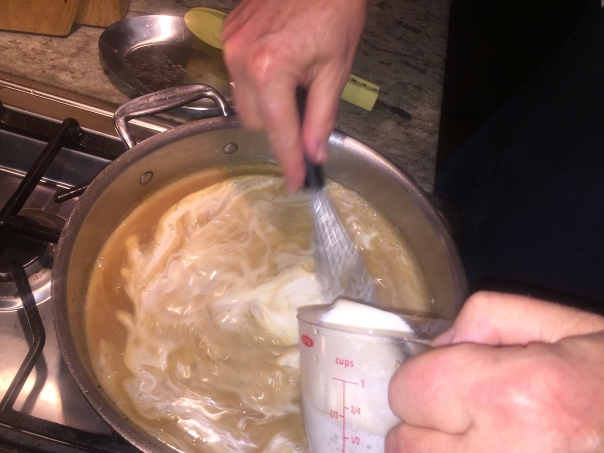 Once the sauce is reduced to about one cup, stir in cream and return to simmer.

Finally, add meatballs to sauce and simmer, turning occasionally, until heated through.

Thanks to IKEA, Swedish meatballs are arguably the most well-known meatballs in the world. Initially they were only enjoyed by upper class Swedes but by the 1850s they were accessible to the middle classes as well. There are endless varieties with numerous sauces from white to dark brown and everything in between. So go ahead and try your (wet) hand at making this recipe! 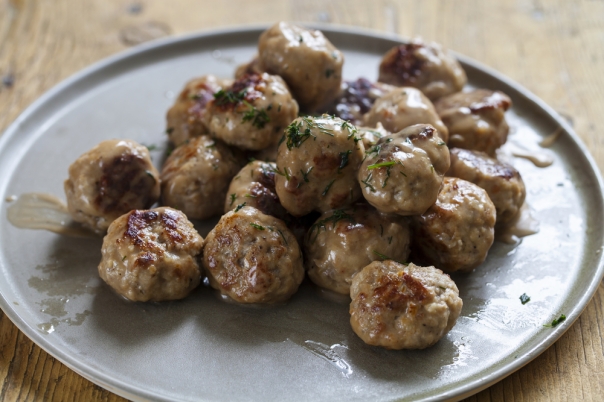