On a recent shopping trip to the Newtown Farmer’s Market, we noticed one of the Amish vendors featured pork shanks, something we’d never cooked before. Huge fans of braised lamb and veal shanks, pork shanks seemed like an intriguing option, and we promptly bought four. Who knew pork shanks could be so moist, supple, juicy and tasty? We didn’t, but we were soon to find out…

They come from the front leg of the pig and apparently can be chewy when cooked incorrectly. When prepared properly, however, they’re supposed to become succulent and flavorful. Therefore, as in other meat shanks, we figured the best way to cook them was in a long, slow braise without letting the liquid boil, which can toughen the meat. 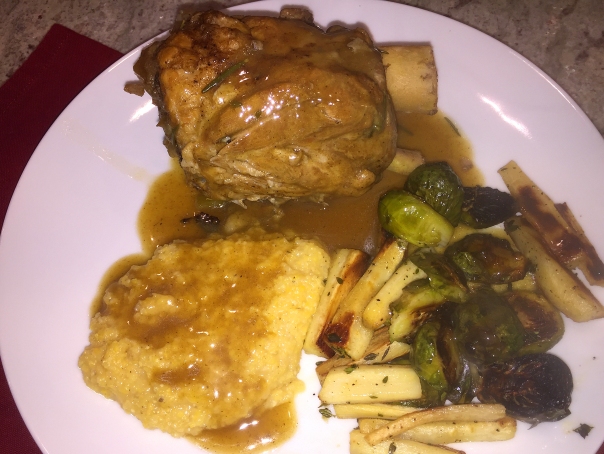 Truth be told, for most of my adult life I’ve shunned hunks of meat on large inedible bones with connective tissue and lumps of obvious fat being served to me on a plate—so for years shanks were a turnoff—until Russ converted me with the long, slow braise that melts away the fat and connective tissue, rendering the meat so beautifully tender and moist.

Hubby found this Braised Pork Shanks recipe on Food&Wine.com by a chef named Tim Love. The instructions below indicate to do the cooking entirely on the stove top, but as braising aficionados, we are more comfortable doing so in a low temperature oven using BIG RED, our Le Creuset cast iron cooking pot.

But first, the key to getting the shanks to release their full flavor potential is searing them on all sides until they get a nice, dark brown crust. So resist the urge to move them around, just let them sit there and develop that outside layer of goodness.

After braising in the 290 degree oven for 2 1/2 hours, our shanks were absolutely divine. The meat, and there was a lot of it on each shank, was fall-off-the-bone tender. We determined that the gravy, while vigorously boiled for a reduction, needed to be thickened by the addition of about 3 tablespoons of corn starch (mixed with a cool liquid first.) 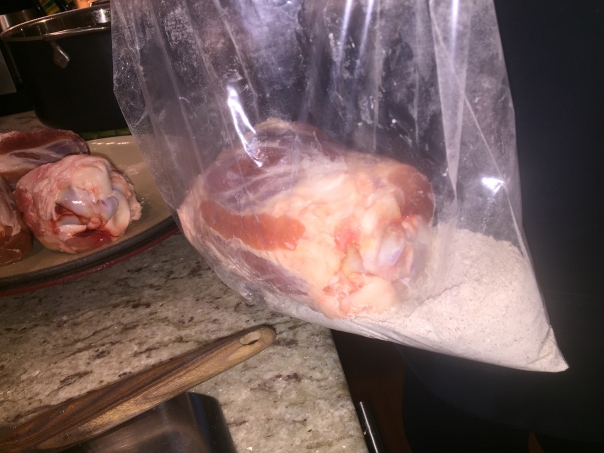 Add the pork shanks to the chile powder combination, one at a time, and shake to coat thoroughly. 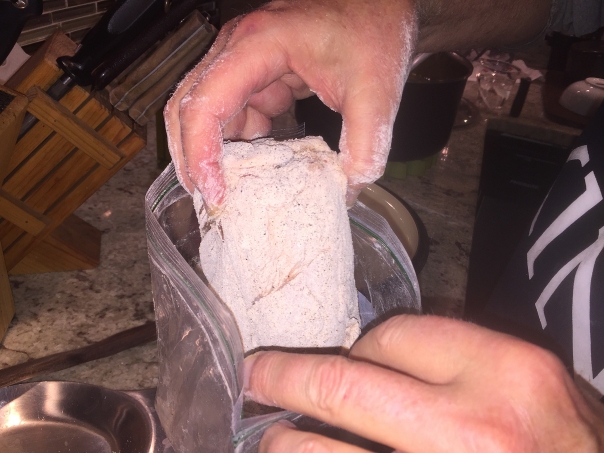 Once thoroughly coated, remove the meat from the plastic bag and add to shimmering oil in pot. 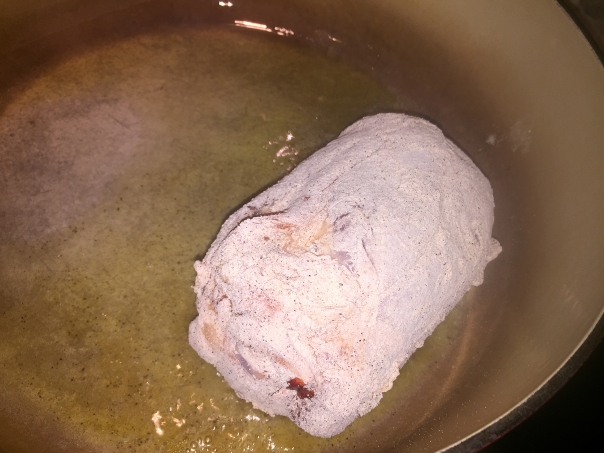 Cook the pork over moderately high heat until browned all over, about 10 minutes. 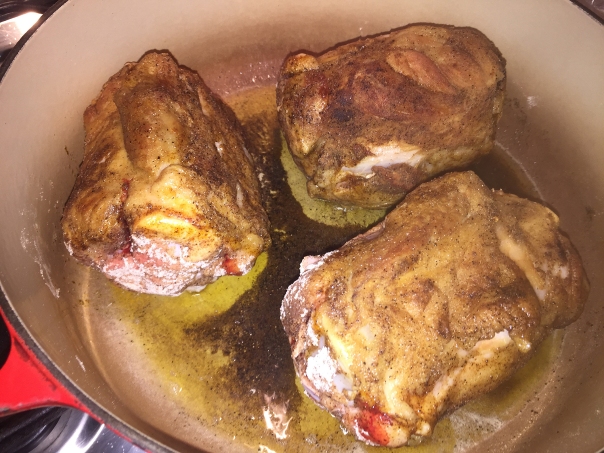 Russ browned the shanks directly in the dutch oven instead of using a separate skillet.

The recipe called for six shanks, but we only cooked four, necessitating a curtailment in our homemade chicken stock from 6 to 4 cups, and the wine to a 1/2 cup; all of the other ingredient amounts were kept the same. The scintillating aromas wafting through the house that afternoon gave promise of a delectable meal soon to be enjoyed.

And that meal included roasted Brussels Sprouts and parsnips with a side of polenta (mashed potatoes would be another good option.) It was a perfect dinner for a cool, late-fall evening. Pork shanks will definitely be finding their way to our dining table a lot more regularly now, I can guarantee you that! 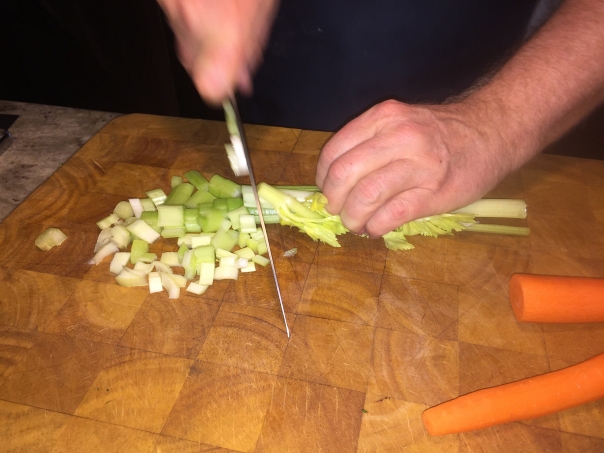 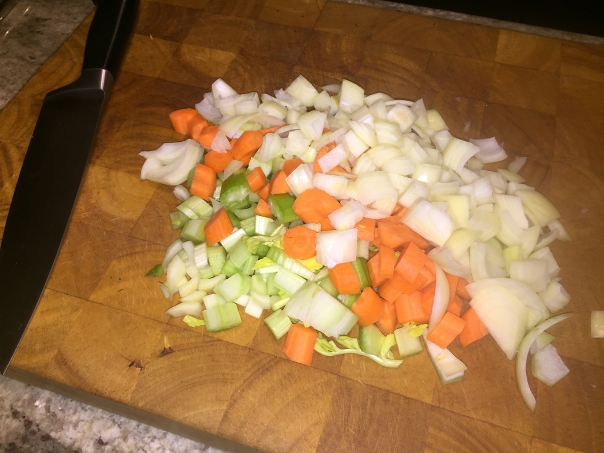 It’s best to make them a uniform size if possible. 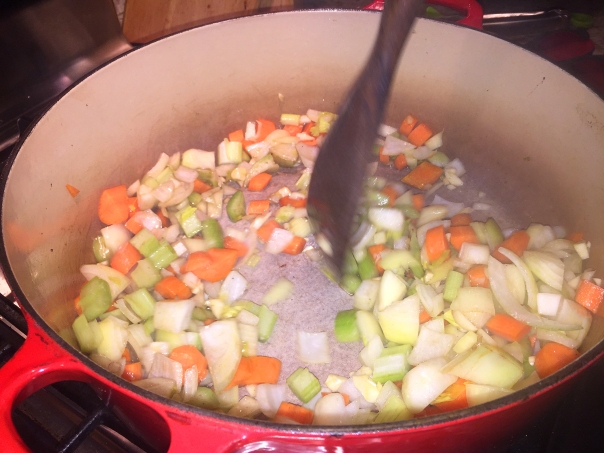 Onion, carrots, celery and garlic are added to the skillet and cooked over moderate heat until softened, about 5 minutes. 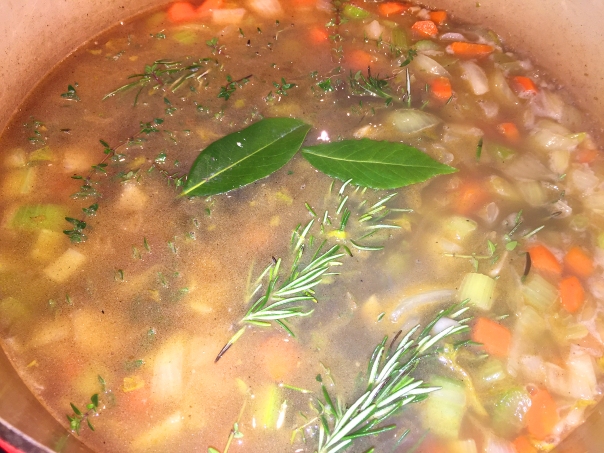 Add the stock, rosemary, bay leaves and thyme, season with salt and pepper and bring to a boil, then tuck the pork shanks into the liquid. 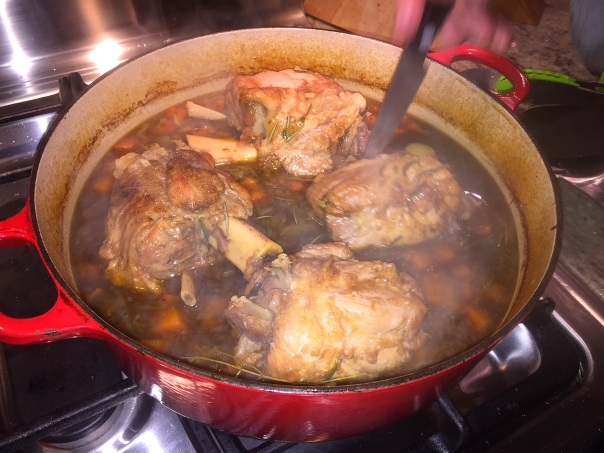 Russ checks the tenderness with the poke of a knife. 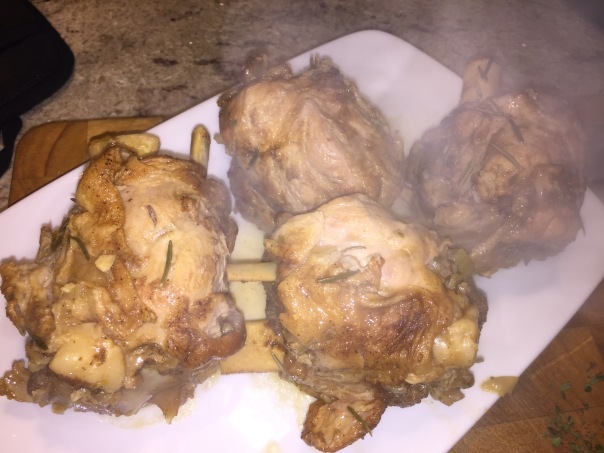 The meat is removed from the pot and solids are discarded from the broth to make the gravy. 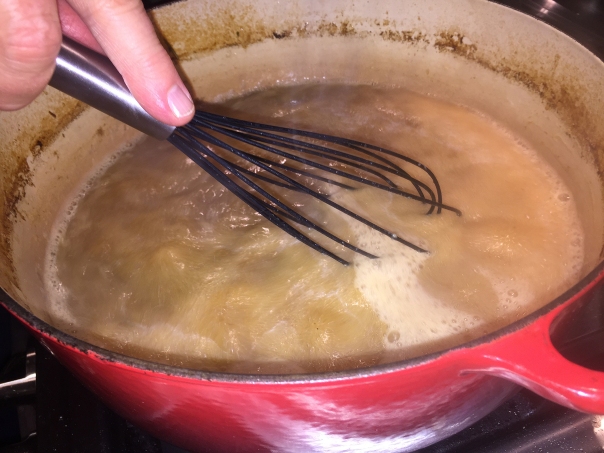 The liquid is returned to the pot and reduced for about 20 minutes.

If cooking in the oven as opposed to the stove top, preheat the oven to 290 degrees.

The recipe can be refrigerated for up to 2 days. 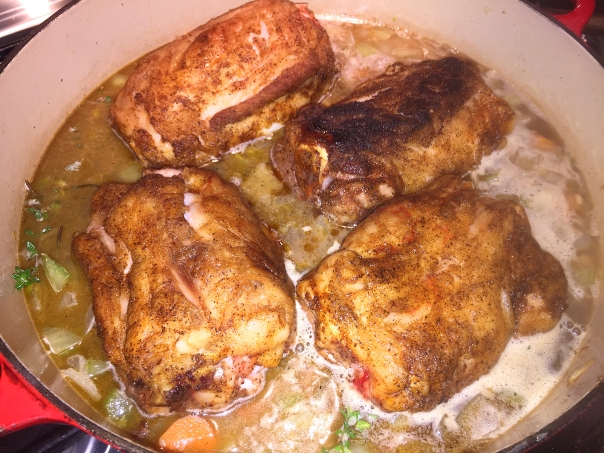 Browned shanks are nestled into the braising liquid.