“Some folks like to get away. Take a holiday from the neighborhood…”

Located on the banks of the scenic Hudson River, Overlook on Hudson is just minutes from West Point and less than one hour from New York City. First owned as a summer retreat by financier JP Morgan, the current structure was built on the original foundation of Morgan’s 1880 mansion with the fireplaces and expansive patios still part of this lovely B&B.

Our view of the Hudson River as we arrived at the B&B during “Leaf Peeping” season.

During the 1970’s, Overlook on Hudson was home to world-renowned recording artist Billy Joel where he composed his popular song, “New York State of Mind.” Inspired by the sweeping views of the Hudson from the large window, “The Piano Man” composed and played a number of songs here, most famously his Songs in the Attic album.

You may recall that we booked this weekend getaway back in early September when visiting Merry Sue and Fred at their “Baum Shelter.” Our initial intentions centered on a long weekend in the Finger Lakes, but because folks are very serious about their Fall foliage “Leaf Peeping” in the Northeast, everything in the area was booked solid through Thanksgiving!

Not wanting to give up on the idea, I suggested looking at places along the Hudson River, and that’s how we discovered Overlook on Hudson. While researching the B&B, we noted every review was rated 5 out of 5—can’t beat that! With only five guest rooms for rent, the atmosphere lends a cozy and tranquil vibe, just what we were looking for. 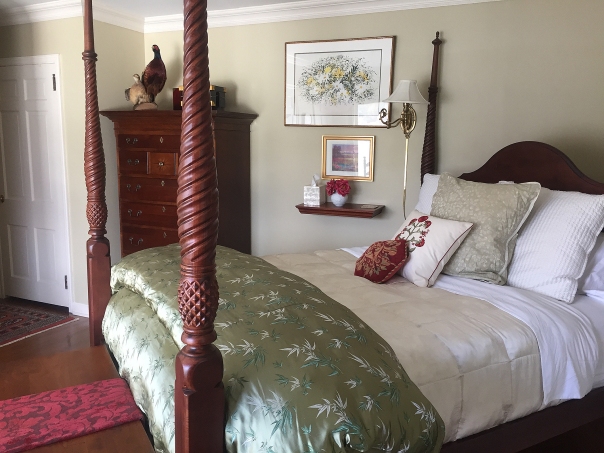 Our room the “Eagles Nest” had a great view of the river.

Russ and I booked the “Eagle’s Nest” with spectacular views overlooking the pool and the river valley—although late October is certainly NOT pool-weather in New York. The Baum’s chose the charming “Cadet Room” boasting of historical art works and memorabilia representative of life as a cadet in the United States Military. There are even photos of the Army/Navy “goat stealing,” a tradition dating back to the Fall of 1953.

Russ stands on the back patio with a cup of coffee.

Upon our arrival mid-afternoon on a Friday, owner and proprietor of the B&B, Roxanne Donnerly (along with husband Jim) gave us a quick tour of the beautifully appointed rooms, where it was obvious the utmost attention had been paid to every detail, right down to fluffy towels and robes. And we all breathed a sigh of relief when we heard breakfast is served at the humane hour of 9 a.m. (We had visions of having to rise at 6:00, because after all, West Point is only minutes away, and many military families are known to frequent their establishment.) 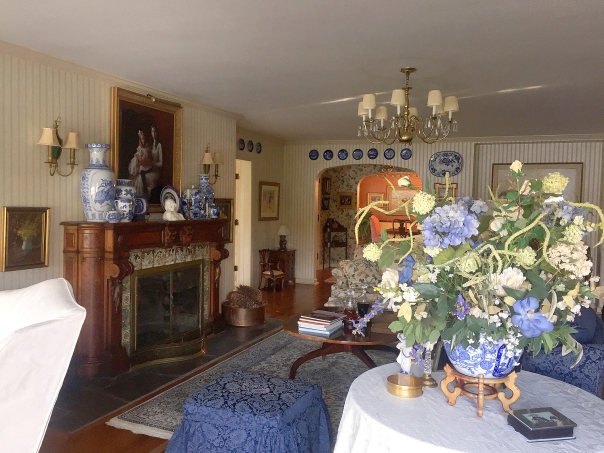 Views of the formal living room showcasing the original JP Morgan fireplace and tiles that survived the 1952 fire because they were in the basement. 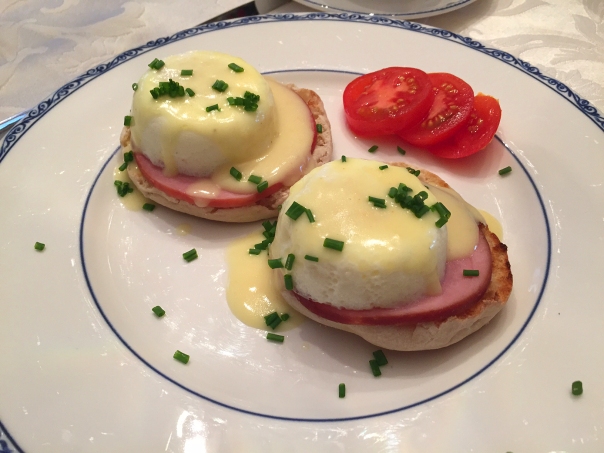 Husband Jim was breakfast chef, while Roxanne graciously served guests several courses on beautiful Ralph Lauren china with sterling silver cutlery. They even made accommodations to the menu based on Russ’s wheat intolerance.

For dinner on our first night we planned a casual feast in Harriman, NY at Angelo’s Sicilian Trattoria, a family-owned and operated BYO. As we pulled up curbside, Merry Sue uttered an audible “Oh no” because we saw absolutely no one in the dining room. But after we disembarked from our vehicle we could see the other half of the restaurant was in fact, jam-packed! Luckily Merry Sue had made reservations and our corner table awaited us.

Brightly saturated walls in several different hues, were lined with a chair railing made of split wine corks. The atmosphere was cozy, yet loud, but the waitstaff were all friendly and very attentive. Yes, because everything is made fresh and to order, there is a bit of a wait for your meals—with a few missteps along the way such as forgetting our side salads until asked, an extra cup of ice until asking for twice, and another iced tea. But given the ginormous sizes of all our delicious entrées at reasonable prices, all was forgiven—not to mention a ton of leftovers!

For starters Lynn and Russ shared a fabulous appetizer of Eggplant Rollatini. Merry Sue and Fred made quick work of their Meatballs in Grandma’s Gravy selection. 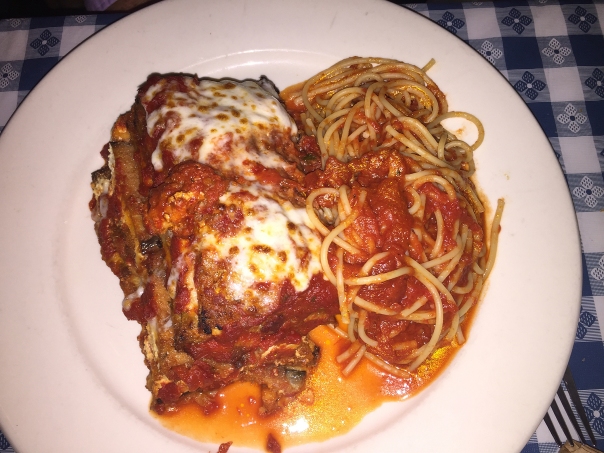 Our entrees were Spaghetti with White Clam Sauce (with extra clams) for Merry Sue, Eggplant Parmigiana for Fred, the Pork Osso Buco with polenta special for Russ, and Chicken Marsala for Lynn.

Saturday morning was spent in New Windsor, NY roaming the grounds of the well-known Storm King Arts Center highlighting large sculptural pieces by such acclaimed artists as Alexander Calder, Dennis Oppenheim and Maya Lin. They are sited across 500 acres of fields, hills and woodlands against the backdrop of Storm King Mountain. 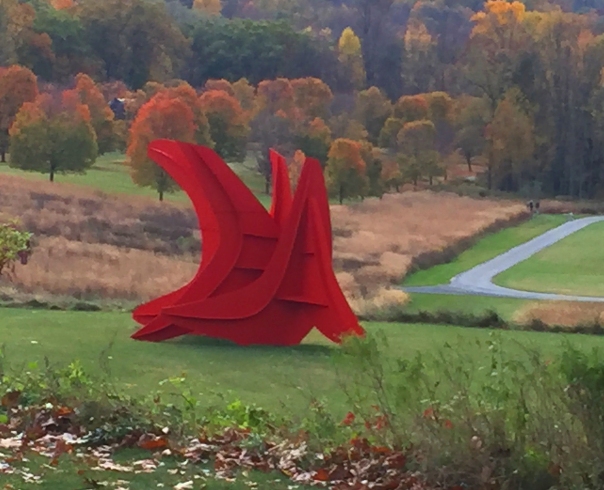 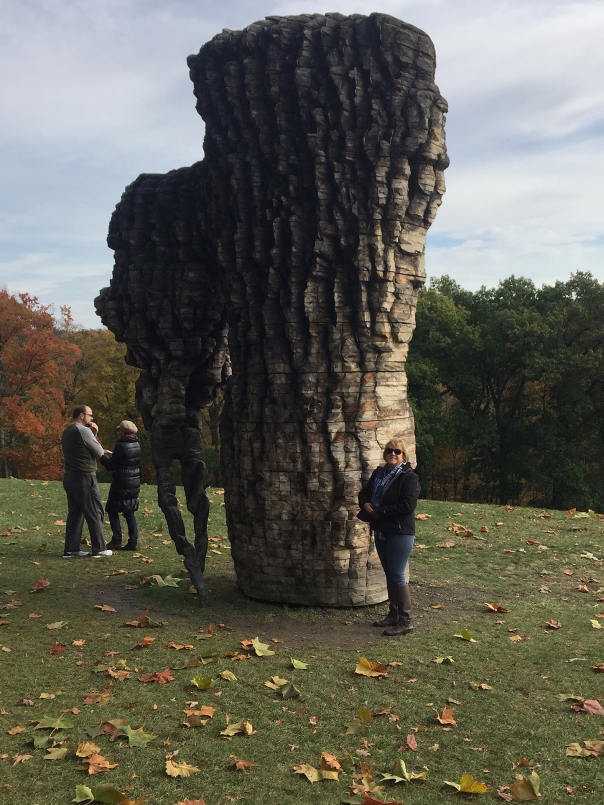 The Hudson River Valley and Orange County, NY have one of the oldest wine country areas in America. Our Saturday afternoon excursion was to Brotherhood, which has the unique distinction of being “the” oldest winery in the U.S. After our wine tasting and consequent wine purchases, we were ready for lunch at their Vinum Cafe which occupies the ground floor of the original winery building circa 1839. While the food was more than passable, the wait and service left a lot to be desired!

Fred snaps a photo of the three of us during the wine tasting; then Merry Sue and Fred pose in front of a large wine casket. 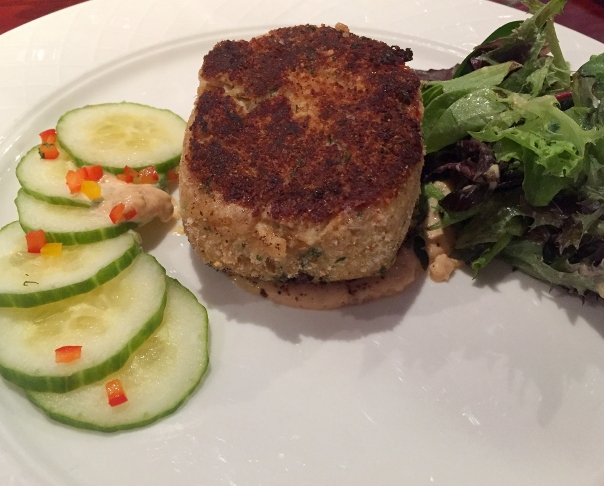 We relaxed back at Overlook for several hours with books, naps, and/or a game of scrabble before heading out to dinner at the Hudson House River Inn. Built in 1832 and operated as a hotel since then, it is located on the serene waterfront approximately one hundred feet from the Hudson River in the quaint, antique shopping village of Cold Spring; and is currently on the National Register of Historic Places.

Overall the food was very good with a few exceptions. Russ and Fred loved their Rack of Lamb special, and Merry Sue thought her roasted garlic crusted Diver Sea Scallops dinner was superb. I ordered from the “Price Fixe” menu thinking it would be a better deal than selecting a steak a la carte. And while my Certified Angus Sirloin topped with bordelaise sauce was cooked perfectly medium-rare, the size was underwhelming, especially considering the hefty price tag with a $4 upcharge. At that cost, I would have appreciated taking home some ample leftovers. 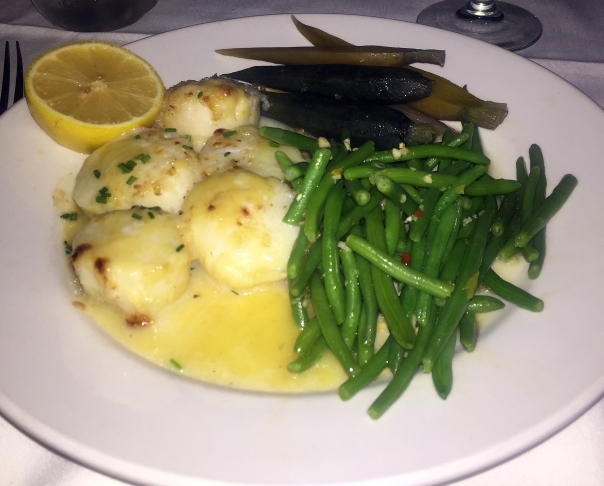 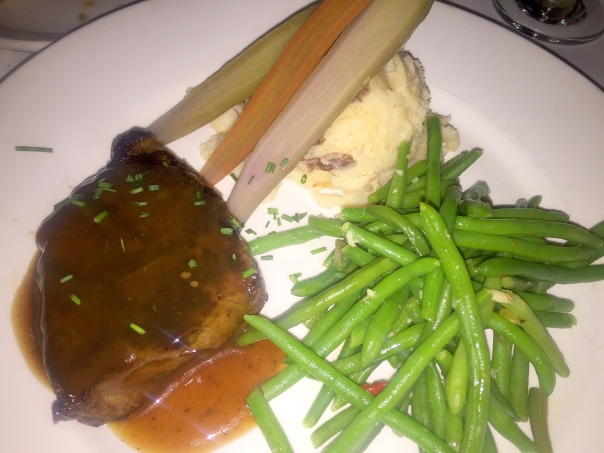 From the top: the Rack of Lamb entrées for Fred and Russ, Diver Sea Scallops for Merry Sue, and my meager, overpriced Certified Angus Sirloin.

But the biggest complaint centered on the totally undercooked, tasteless carrots and rubbery green beans that we all speculated had been frozen prior to reheating. It’s always a telling sign to us—and not necessarily a good one—when every entrée comes paired with the exact same sides. Where is the creativity in that? On the other hand our waitress was extremely friendly…

I’d be remiss if I didn’t mention the Lobster Bisque that Fred and Russ enjoyed as appetizers, and a tasty Arugula and Golden Beet Salad I chose as part of my three course offerings. Merry Sue was the lucky recipient of my last course—dessert. Since I don’t indulge in dessert, she was more than happy to oblige and chose the New York Cheesecake with raspberry coulis; savoring every morsel and gave it three thumbs up!

A side note: a young couple also staying at the Overlook, and with whom we had shared breakfast that morning, came in and were seated at the table next to us. From our vantage point Russ and I could see—and hear—that they were having a major spat all through dinner.

On the last day of our visit, that aforementioned young couple occupying the top floor were obviously in the throws of a break up and left very early and unexpectedly. Seizing the opportunity, we asked if Roxanne would show us the famous Billy Joel Suite. (The Billy’s Nest with queen bed, is only available when coupled with the Billy Joel Room to become the perfect private suite for family and friends.)

According to Roxanne, back in the 70’s when the Piano Man and his first wife Elizabeth rented the house for two years, Billy had his piano “in the attic” which the Donnerly’s later fixed up into a charmingly outfitted suite decorated with numerous artifacts referencing the legendary rocker. Thus the title of his well-known album “Songs in the Attic” which ranks among his very best work. 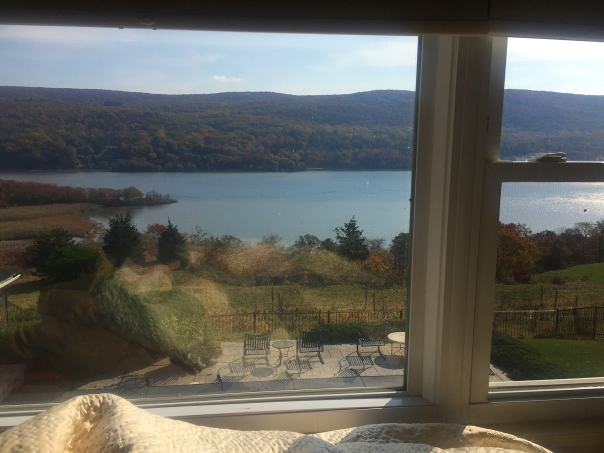 The panoramic view from the Billy Joel Room upstairs window.

The music theme continues on a tea set.

A planter was crafted from old LPs with titles from various Piano Man songs.

Overlook on Hudson is situated in Highland Falls, NY, and is referenced in lyrics from another song on that album “Summer, Highland Falls.” You may be familiar with “They say that these are not the best of times. But they’re the only times I’ve ever known…”

Well, they were certainly some of the best of times for the four of us. So when visiting the area, don’t “overlook” this gem on the Hudson!