A fusion BYOB, El Tule brings deliciously exotic and authentic Peruvian and Mexican cuisine to the New Hope-Lambertville area. Family owned and operated by the Engoavil family, El Tule has mastered the cuisine of the their native lands, Peru and Mexico. The restaurant’s name was chosen because the Egoavils have deep roots in their family tree, which are firmly based in both of their cultures.

In the Mexican state of Oaxaca is the world’s largest tree, a cypress called El Árbol del Tule, believed to be between 1,500 and 3,000 years old and often called the tree of life.

Go ahead and spread your culinary wings because your acquaintance with the type of food served here may end at the “almost” perfect house-made guacamole and nachos. We found food is fun at El Tule, where the menu offers some familiar, along with some not so familiar choices. The intriguing list of exotic items, such as carapulcra (stew of pork, potatoes and spices), parihuela (seafood soup), and lomo saltado (stir-fry of beef, onions and tomatoes), could make choosing a challenge. But to keep you from straying too far out of your gastric comfort zone, there is a good description of each item—so you’ll know what’s in it, even if you can’t pronounce it.

We first noticed this quaint restaurant located on North Main Street over the summer when we passed it heading for a destination north of Lambertville. It wasn’t until friend Jeremy made a recent posting in Facebook extolling its virtues that we had an AHA moment, and quickly made reservations for a Saturday night.

They have no parking lot and trying to find a parking spot on a busy weekend night can be exasperating, but after circling a block or two, we found one a short distance away. After a quick, brisk walk we located the side entrance and popped in. Unexpectedly, you are immediately in the one bright orange room with all of the dining tables and a small reception desk. Thank goodness no one else was waiting for a table too, because there’s barely any room to hang out, let alone stay out of the way of the service staff. Outside is a nice looking patio that wraps around the side and back of the restaurant, but it was way too cool and windy to dine al fresco that night.

There was a moment of panic when the host (who I later learned was the patriarch, Mr. Engoavil) indicated our name was crossed off the waiting list. But within seconds one of the daughters said it was an error and they would have accommodations for us shortly—which they did, and we were seated at one end of a long table.

The noise level is almost deafening, partly due to it’s size, high cathedral ceilings, no sound buffers, and several really loud, animated parties of peeps. We struggled to hear the waitress as she explained things to us. Then we got down to business deciphering that menu. One oddity I noticed, the ending of several Peruvian dishes all said Tacu Tacu. So of course I had to inquire.

Unable to hear the waitress’ explanation, I later Googled it and found out that Tacu Tacu is a typical Peruvian recipe that originated as a way to use up left over rice and beans. The leftover rice is mixed with cooked, seasoned Canary beans, and then fried in a skillet to make a large patty. 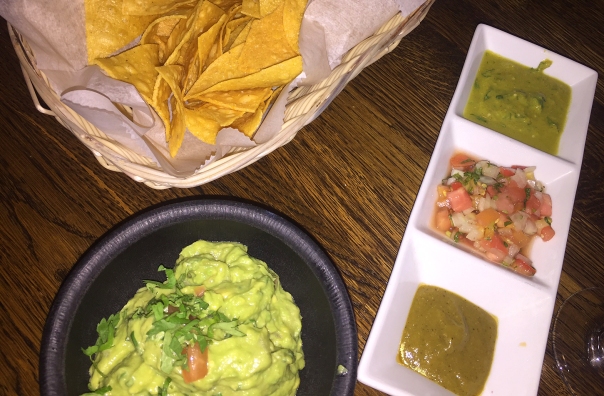 For starters I insisted we get the Guacamole because it looked like mine, had the same ingredients as mine, and other than El Vez in Philly, we have never found a restaurant that makes anything close to as good as mine—until now. We both agreed that had it contained a little bit more of both salt and lime juice, it would have been perfect!

As we waited for the guac, we noticed all other diners received a basket of nacho chips with a side of three sauces. After a long several minutes, and before I could complain, they arrived with our pestle of yummy guacamole. The Peruvian Tamale with pork caught Russ’ fancy which came plated with a side of lettuce and pickled onions (which seems to be a Peruvian staple.) He offered me a taste and while it was OK, I wasn’t nearly as enthralled with it as he.

Being very familiar with Mexican food, for entrees we deliberately chose from the Peruvian offerings. My choice? The Red Snapper and Crabmeat Tacu Tacu, one of chef Carmen’s specialties, and special it was! An entire half of a perfectly tender and moist red snapper topped with crabmeat cooked in a light cream sauce of Peruvian Rocoto pepper sauce, served on top of Peruvian canary yellow bean Tacu Tacu. The photo above shows a beaming Carmen, affectionately known as Kiko, holding a platter of the red snapper entree.

After agonizing over which entree to get, Russ finally selected the Peruvian Lamb Style Stew with tender pieces of boneless lamb slow cooked for 48 hours in a sauce made of Peruvian Aji escabeche and Chicha de Jora served with canary beans and white rice—and two yucca fries!

While we both immensely enjoyed our meals, their portions are very large and therefore we both had lots of leftovers to take home and enjoy for a second time. Russ swears his was even better the next day; me, I loved mine just as much both days.

We’re thinking the next time we visit—and there will definitely be a next time—we’ll order appetizers and ceviches and graze our way through several different options. It’s too bad that we have to wait many, many months before it will be warm enough to sit outside though. Keep in mind, if you pay in cash, you’ll receive a 5% discount.

Oh, and about that parking. When we made it back to our car, someone (most likely the driver who was parked behind us) had pulled up both windshield wipers and pushed in our sideview mirrors. We’re guessing he was trying to tell us we had parked to close to his precious SUV. A real class act…