With six spectacular sunshiny days in a row, it was only fitting that the morning we departed boon hotel+spa in Sonoma County, the weather turned gray, cool and overcast; in some ways it only made it easier to leave. Brother-in-law David wanted to make sure we got to see the Pacific Ocean before we left, so we headed 15 miles or so West to the town of Jenner where the Russian River ends and meets the sea. 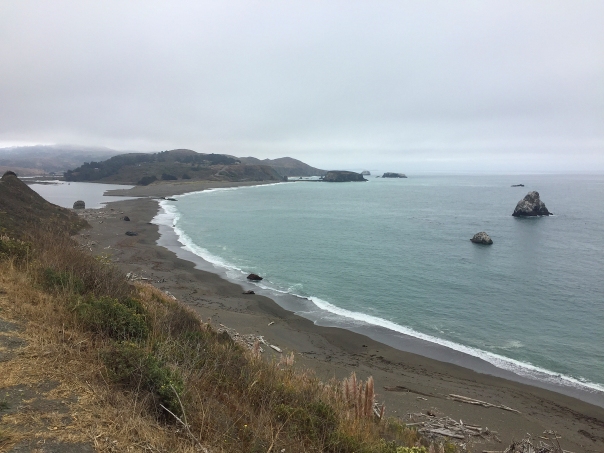 The Russian River, left, empties into the Pacific Ocean in the town of Jenner, CA.

As seen from the restaurant’s protected porch, a view of the River’s End rental cottages situated on a cliff overlooking the Pacific.

After a short drive along twisty, winding Highway 1, we stopped to enjoy lunch at River’s End restaurant situated on a bluff with spectacular views overlooking the ocean and the confluence of the Russian River. Even though it was barely noon on a weekday, we apparently got the last window table—the place is that popular. And word has it, the sunset views are spectacular.

Located one hour and 45 minutes north of the Golden Gate Bridge, this haven for lovers of the Sonoma Coast and wine country has been around since 1927. The fabulous food is unique and internationally influenced with a slight Asian sway—yet utilizes local purveyors.

But what I will remember most for the rest of my cognitive days was their Salmon Chowder. It was a harmonious blend of creamy lightness with herbaceous notes, buttery salmon richness and house made croutons. I was so taken with it, that I am on a determined mission (through Bon Appétit’s RSVP department) to get the recipe and make it tout suite. (Russ and Dave also had the chowder.)

I could have died and went to heaven after that chowder, but seeing as we had several more days of vacation left, I decided to hang in there and order the rest of my lunch. In my case, it was the Tuna Poke, a short tower comprised of Albacore prepared with cucumbers and avocados infused with an asian vinaigrette and accompanied with crispy wontons, and dabs of wasabi paste and pickled ginger. Right up my alley, but way too many crispy wontons for my taste.

Russ zeroed in on the Salmon Crudo with thinly sliced raw salmon over lithe wedges of avocado with a medley of jicama, radish and cucumber finished in a lime-wasabi sauce served with wonton tuiles. Very artfully plated, it wasn’t overwhelming; but taste-wise, extremely satisfying.

Dee and Dave were still in a lamb-frame-of-mind because they both ordered their famous Chimichurri Lamb Burger made from ground local valley ford lamb, redwood hill farm goat cheese and mint chimichurri topped with fried leeks served on a ciabbata roll and of course served with some very good fries. Dee opted to have her chimichirri sauce on the side, eat most of the burger without the bun, and let brother Russ munch most of the fries. 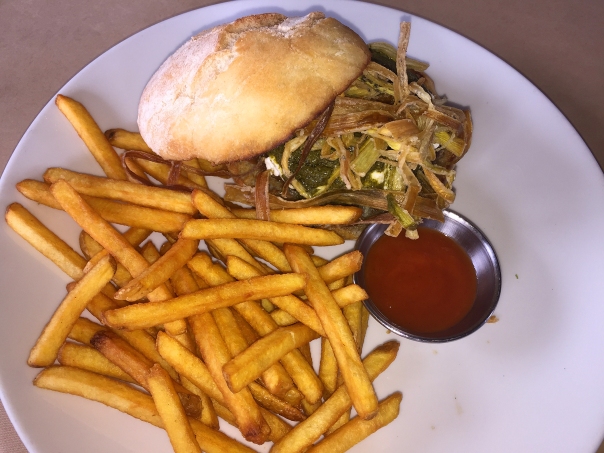 Well it was the River’s End, but not the end of our vacay, so we hopped back into the car for the next phase of the trip—an hour’s ride to Kim and Ken Cochrane’s home in San Rafael, Marin County. The last time we visited them was in 2005 for Dee and Dave’s wedding just as Hurricane Katrina began its devastation of New Orleans…