For reasons we couldn’t fathom, one of our favorite BYO’s in Newtown, Tiramisu, closed unexpectedly this past spring. Every time we’d drive by the shuttered facility on State Street, we’d anxiously glance to see if a new restaurant had taken over. Finally we were rewarded with the sign “Now Open, Boccaccio, authentic Italian food.”

The first opportunity I had to check it out was a night Russ had other commitments so I enticed my “gal-pals” Rosanne and Jeremy to join me on a maiden voyage. Arriving first, I was greeted by the host Rosalba (who I’d later find out was the owner), and once seated, John our waiter asked about water preference and explained the specials will be revealed when the rest of the party appears. 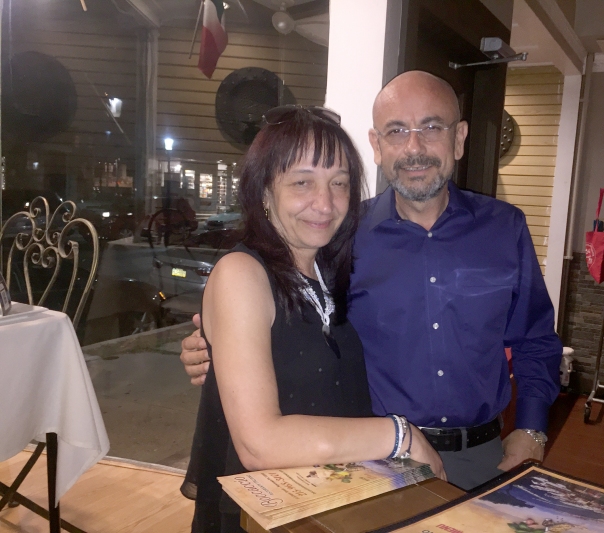 While I waited, it gave me a chance to eyeball the new decor which was fresh and clean, leaning toward the modern, but not drastically changed. With the extra time I also scrutinized their dinner menu, and while not huge in scope, it offers about a dozen choices each under their tempting Appetizers, Pastas, and Main Entrees lists.

My gals appeared shortly and we set about uncorking the wine and chatting up a storm before John came by to entice us with the specials of the night. As we pondered what to order, we received a bread basket containing a few varieties paired with a dish of olive oil layered with fresh herbs and spices. 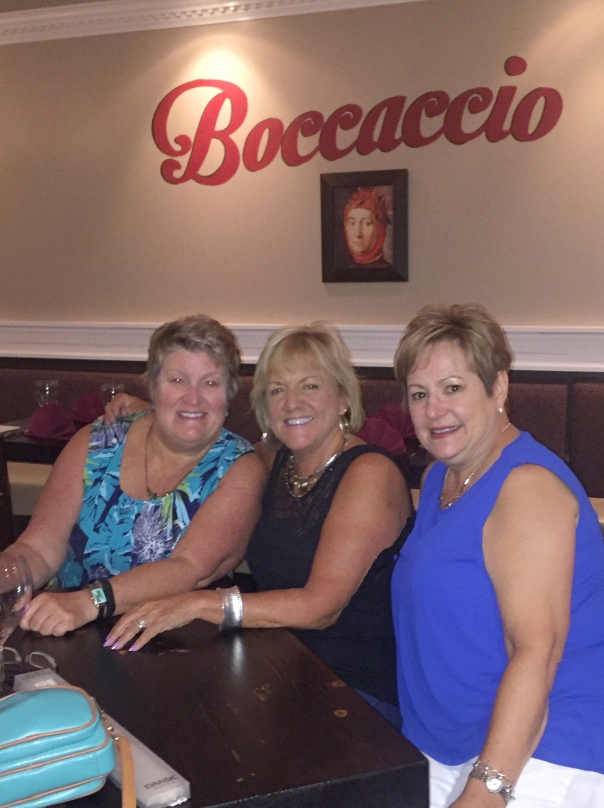 As an appetizer we all agreed to share the Gamberoni, consisting of three large, pancetta-wrapped shrimp that were dipped in beer batter, lightly fried to perfection and served with homemade buffalo sauce. OMG, you have to try these babies! The sauce had a bit of a kick to it, but nothing overwhelming. 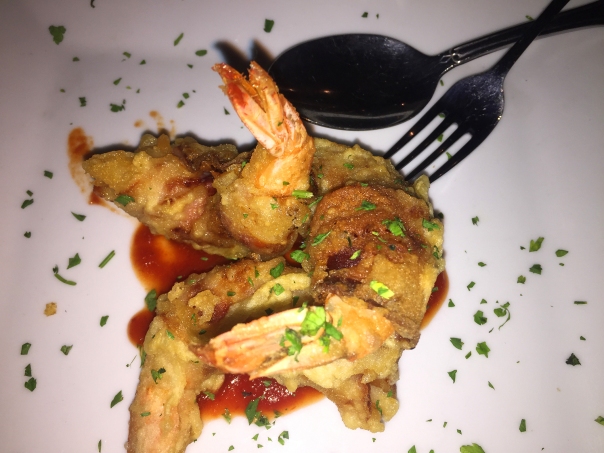 Side salads are not usually something to write home about, but I must admit, their homemade dressing  contained stone ground mustard that was just delicious topping the crisp-fresh salad ingredients. 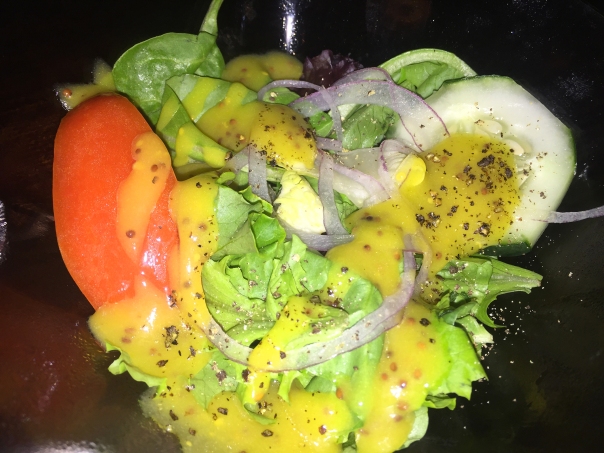 For some odd reason it is uncommon for me to order pork when we dine out—I don’t know why, I love pork! Although several decades ago there was about a 10-year period when I did’t eat it at all. Again, don’t know why, just didn’t. But I kept going back to the Macellaio on the menu and decided that was the dish for me. Jeremy was torn between a few different items, but in the end, copied me and got the pork too.

The 10-ounce tenderloin finished with sun-dried tomatoes came plated with a crown of broccoli rabe and sliced garlic resting on a bed of the most creamiest mashed potatoes I’ve indulged in recently, all nestled in a shallow wash of marsala sauce. While the broccoli rabe was very tasty, my only complaint about the dish was that the stems were a bit tough to cut through. Nonetheless, the meal was a winner! 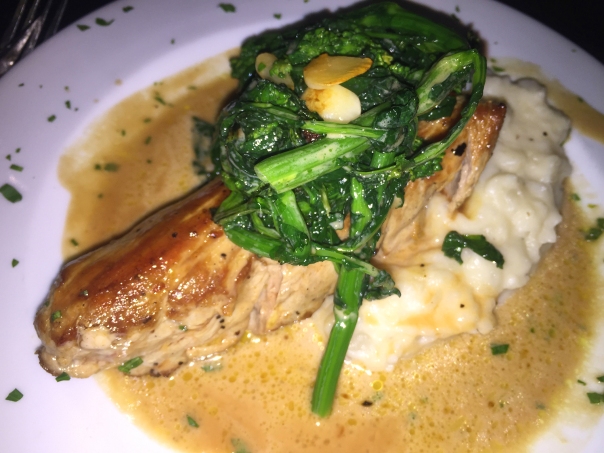 After careful consideration, Rosanne opted for one of the night’s specials, Lobster Ravioli which arrived bathing in a white wine and cheese sauce with pancetta bits and cherry tomatoes—although they weren’t visible to the eye. When Rosanne mentioned that the tomatoes were missing, she was told they were part of the sauce. OK, we went with that… 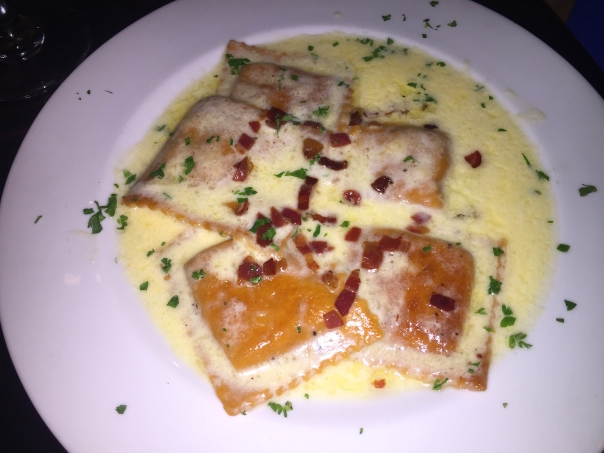 As you know, dessert is just not my thing, but Jeremy and Rosanne couldn’t resist sharing an order of the Crème Brûlée, and what a pretty presentation it was. The dessert consists of a rich custard base, traditionally flavored with vanilla, topped with a contrasting layer of hard caramel and served at room temperature. A two-spoon effort, I wasn’t hearing any complaints from the gal-pals. 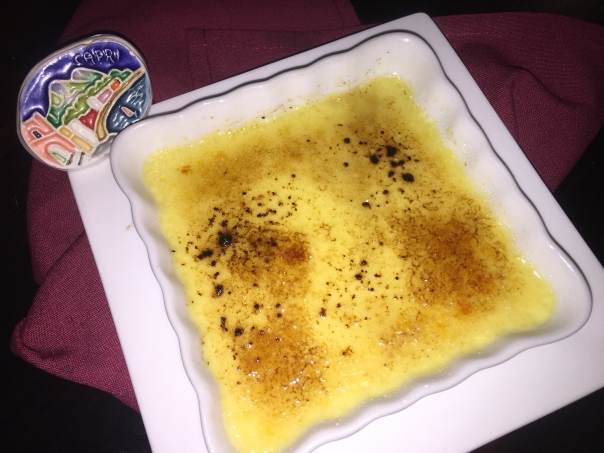 Crème Brûlée is also one of Russ’ faves, and after hearing our rave reviews, he can’t wait until we go back. 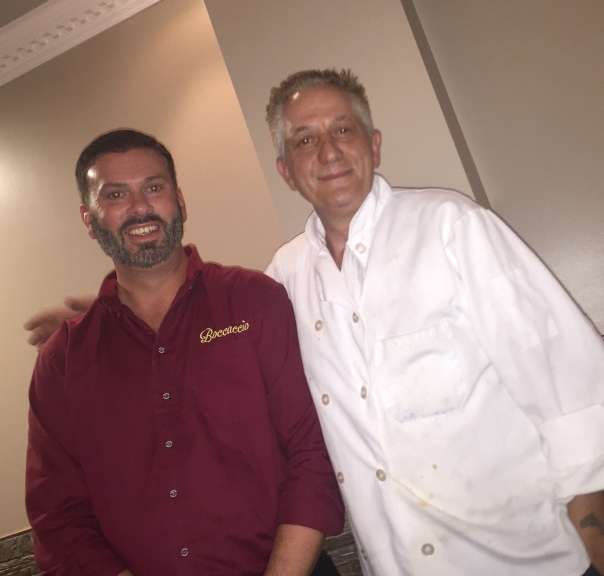 As noted on their website, Chef Ciro started cooking in Italy at the age of 8 and studied to become a chef in Tuscany, after which he moved to the U.S. and worked in Atlanta for a hotel chain before opening Boccaccio. Lucky for us, Ciro (above in the chef’s jacket) agreed to pose for a photo with waiter John. It was becoming a family affair—and that’s exactly how they made us feel, like family! 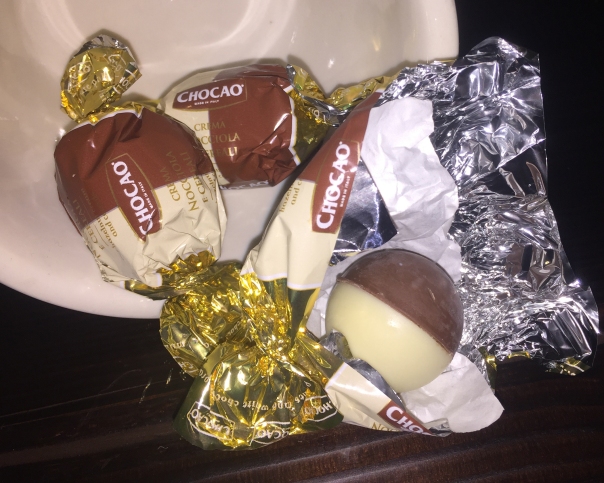 Congrats to the entire Boccaccio team. All hail the new kid in town, who hopefully will become a well-known neighbor for years to come!