In writing this blog it made me think of the late-60’s, early-70’s band Hot Tuna (remember them?) an American blues rock band formed as a spin-off of Jefferson Airplane. They began during a hiatus in Airplane’s touring schedule in early 1969 while good ol’ Gracie Slick was undergoing recovery from throat node surgery that had left her unable to perform. July 1974 marked a departure from their primarily bluesy, acoustic style when Hot Tuna dropped their acoustic sets completely and morphed into a heavy rock band. They performed their final concert at the Palladium in New York City in November 1977… OK, I digress…

Good-quality tuna is a fabulous secret weapon for easy but satisfying meals. Its silky texture and slightly briny flavor makes this salad feel substantial. And by all means, don’t buy the cheaper canned stuff. You’ll be amazed at the difference in quality.

Fine Cooking blind-tested both canned and jarred samples and overwhelmingly preferred the jarred tuna (yes, it does cost more) which contained bigger pieces, was richer tasting, and had better texture. And we have to concur! They rated these two brands as the best: Tonnino (pictured below) and Sclafani. 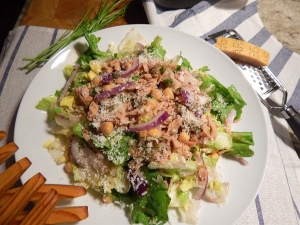 PS—We had enough leftover for both of us to take to work for lunch the next day and we were both surprised how well the salad held up.