As promised, here is the recipe for Thai Beef Stew with Lemongrass and Noodles found in the February 2014 issue of Bon Appétit. In this soul-satisfying dish, delicate rice noodles are combined with gingery spiced beef.  And it was really, really good!

We had planned this meal about a week in advance but I didn’t look at the recipe details until I was heading out the door for work the morning of our intended meal. And to my horror, I noted that it was about 4 hours total cooking plus prep time — which means we would’ve been eating dinner that day around 11:00 — which even for us, is way too late!  I figured I’d make it anyway for the following evening, and we could just roll with the punches and heat some leftovers, which is precisely what we did. In most instances when cooking a tough piece of meat such as beef chuck, the cooking time is a longer process. Seems we both forgot that little nugget of info in this case…

When purchasing lemongrass, look for firm stalks (not soft or rubbery, which means it’s too old). Lower stalk should be pale yellow (almost white) in color, while upper stalks are green (do not purchase if outer leaves are crusty or brown). Usually fresh lemongrass is sold in groupings of 3-4 stalks, secured with an elastic band. Stalks are approximately 1 foot long (or more). If you can’t find it with the fresh produce, check the freezer section – lemongrass stalks are also sold in frozen packets. I have also found it in tubes, as a paste, by the packaged fresh herbs. But if at all possible, fresh is best.

Lemongrass is a stalky plant with a lemony scent that grows in many tropical climates, most notably in Southeast-Asia. A common ingredient in Thai cooking, lemongrass provides a zesty lemon flavor and aroma to many Thai dishes. Lemon juice (or lime) may be substituted for lemongrass in a pinch, but citrus fruits will not be able to fully replicate its particular qualities.

Recipe by Alison Roman.OUR TWIST: Since neither of us like coconut (but strangely we both like coconut milk), we omitted this step. Plus, I only had two shallots on hand when making this recipe so I substituted a sweet vidalia onion in place of the two remaining shallots. Toward the end of the cooking time, we both felt that the broth was too thin and watery and we wanted to thicken it somewhat. Enter the fact that we both like coconut milk — so I made a slurry of the milk and cornstarch and added it to the simmering stew until it was the consistency we wanted.

Take It Up a Notch 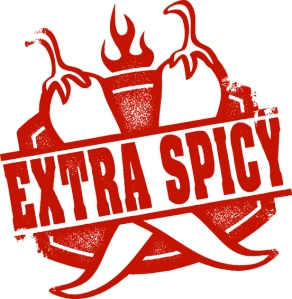 Posted February 9, 2014:
As reported on NBCNews Health in August 2013, a new study presented recently at the 2013 Institute of Food Technologists annual meeting suggests there’s a correlation between preferences for spicy food and risk-taking personalities. (hmmmm, should I be worried here?)

I don’t think we can say that spicy food lovers are always risk takers, since there are always exceptions to the rules. However, it wouldn’t be totally off base to guess that someone who enjoys spicy foods would also be someone who would be inclined to enjoy taking certain risks, like riding roller coasters.”

Another article reported Pennsylvania State University’s research examined the link between peoples’ personality types and whether they were fans of food packed full of hot spices such as chilli. It found that people who seek adventure and intense sensations like spicy food more than those who avoid risky situations.

While I admit, I use to love roller coasters, whitewater rafting, riding in glass elevators, and racing around on motorcycles (back then with out helmets!), seeking those adventures have lost some of their appeal over the years. And I wasn’t brought up with a lot of spicy food either. In fact, most meals my mom made were lightly seasoned and not at all zesty. But as a child I often gravitated toward hot spicy candies like Red Hots, Hot Tamales, Brach’s Cinnamon Hard Candy, and Dentyne Fire Gum.

Only food prudes are afraid to dabble with a little hot sauce occasionally. And for me, I suppose it wasn’t until I left for college and became exposed to a more exotic palette of food at the University of Michigan, Ann Arbor that I actually made a conscious effort to seek out zingy food such as Mexican and Indian cuisines. And thus began my life-long passion for hot peppers.

To this day when dining out, I will scan the menu and zero in on the spicy offerings first. And usually without fail, I ask the waiter to up the heat quotient a notch or two–and that’s without even tasting anything beforehand. I believe only once, many years ago, did I go overboard and asked that my entree at an Indian restaurant be “Indian Hot Hot.” Lesson learned…

Another time I was preparing a spicy rice dish for a party I was hosting. The recipe called for one or two hot peppers and I bought a package of eight simply labeled “hot peppers,” when in reality they were scotch bonnet peppers–considered the hottest in the world at the time–and I used all eight in the dish! I only realized my mistake after taste-testing halfway through the preparation, at which time I eradicated all of the peppers from the rice. Suffice it to say, very few people were able to tolerate that dish–but I rather enjoyed it. My mom was in visiting from Michigan at the time and she got a real chuckle out of my mistake–but she took my word for it and wasn’t about to sample it for herself. I guess this is one of those instances that you can file under “disasters.”

And what about their medicinal purposes? According to John Roach for National Geographic News, people who live in warm climates are attracted to spicy foods because the red-hot seasonings keep people healthy. The research shows that people in warmer regions of the world benefit from eating spicier foods, because spices are natural antimicrobials. Food-borne pathogens and parasites are more prolific in warmer climates, and spices can kill or inhibit their growth. (Yeah, but I grew up in Michigan, remember?)

A recent article in the Washington Post laid out the five influences on how people taste food.

1. Genetics: People experience bitter flavors differently, as the combination of bitter receptor genes varies for each person. And almost everyone lacks the ability to detect at least one scent, meaning that the chemical that gives truffles their distinctive odor might strike you as either offensive or earthy. Or you might be among the 25% who can’t smell it at all. (Maybe that’s why I don’t understand the use of bay leaves in a recipe, I can never detect their flavor.)

2. Experience: Did you know babies are predisposed to liking the foods their mothers ate while they were pregnant and later while breastfeeding? (Hmmmm, still doesn’t explain why I like spicy food and my mom can’t tolerate it!)

3. Culture: Not many people like extremely bitter or spicy foods the first time tasting them, but they can come to tolerate and even crave them with repeated exposure and by being around people who enjoy these foods. (So stick with me pal, I can get you to like real spicy food in no time!)

5. Texture: Although science cannot yet fully explain why, some people simply hate gritty, slimy or creamy foods, no matter their flavor. (And this explains why I don’t like foods with the slimy “yaya” texture such as squid, escargot, octopus, mussels…)

Typical extreme hot sauces, favorites of benign masochists everywhere, run up into the hundreds of thousands of Scoville heat units—that bottle of Tabasco in your kitchen is only 5000, tops.

I never nap;
I really enjoy art;
I love the color purple;
I am competitive by nature;
I rarely, if ever, eat dessert;
I eat doggie-bag leftovers for breakfast;
I feel content when I’m near bodies of water;
I usually start waking up after 4 hours of sleep;
I drink wine – for years it was white – now most often it’s red;
And I crave spicy food!

So in honor of my penchant for all things spicy, I recently cooked a few savory dishes found in my February 2014 issue of Redbook. With the sriracha chicken recipe, I used a combination of legs and breasts. For the most intense flavor, I marinated the chicken overnight. And since the pieces were on the large size, we cooked them for about 45 minutes.

Another wonderful savory dish from the February issue of Redbook:

Will definitely be posting more on “all things spicy” in the future. If you have a favorite spicy recipe, I’d love to hear from you!

3 thoughts on “The Savory Side of Life”