Chef/author Grace Lee says this is one of the easiest dishes to stir-fry and guaranteed to satisfy. And Satisfy it did, with a capital “S”. It is said, with an easily accessible street-food culture and a fresh selection of fruits and vegetables year-round, it’s impossible to go hungry in the island paradise of Trinidad. 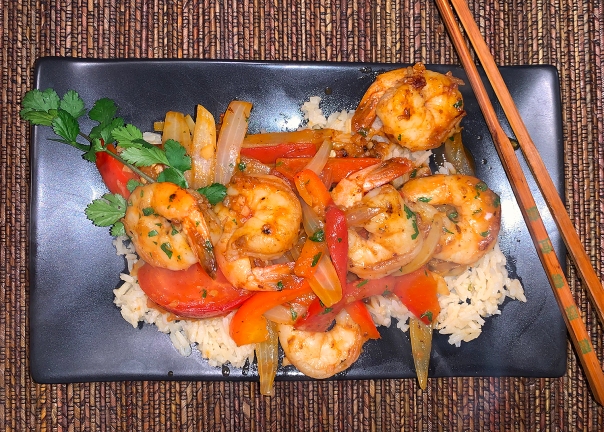 This delicious Chinese Trinidadian Stir-Fried Shrimp with Rum recipe from Milk Street comes together super-quick, especially if you buy the shrimp already peeled and cleaned. Now I know the directions indicate to leave the shells on, and we usually buy them that way making use of the peeled shells in homemade shellfish stock. (Which we used BTW, in place of water for the steamed jasmine rice.) But truth be told, they had a sale on cleaned extra-large shrimp and we couldn’t pass it up—we did leave the tails on however.

A Trinidadian cooking practice said to remove the “fishy” taste is, before cooking, rinse the shrimp in lime juice. I never heard of this, but decided to go with it—in the end, not sure if I could tell much of a difference.

A couple of notations in the procedures. Grace always directs you to push the minced garlic (and in this case, ginger) to the side after it becomes fragrant. We have found that doing so, especially on such high heat, burns the aromatics so we remove them, reintroducing them to the wok after the shrimp and veggies have been stir-fried.

And about those veggies, we substituted a red bell pepper in place of the green because that’s what we had on hand. I think the dish would work with whatever color bell pepper suits your fancy. The sauce, which we loved, was just fine as is, but if “saucy” is your thing, it wouldn’t hurt to double it. We plan on doing so next time… 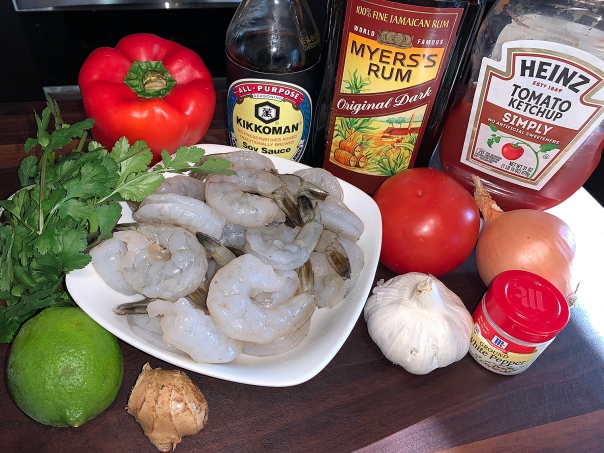