In this one-sheet-pan supper, beefy New York strip steaks lend their flavorful drippings to sliced brussels sprouts sizzling below. To speedily prep the sprouts, use the slicing disk on your food processor, although I used the old-fashioned method—a knife. And for this reason, our slices might have been a bit thicker than called for, so we left them in the oven for the ten extra minutes while the steaks rested. Perfecto! 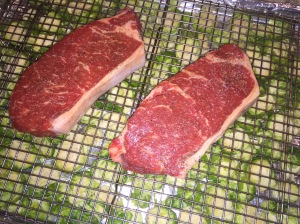 The seasoned strip steaks on a rack above the sprouts.

The finished sprouts will have charred ones on the edges, just mix them with the less charred.

Slicing the medium-rare steaks after a ten minute rest. 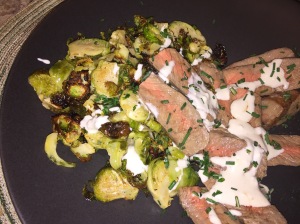 The steaks and sprouts benefit from a dollop or two of the blue cheese sauce and a sprinkle of chives.