In the small river town of Lambertville, NJ on South Main Street, a 50-seat, 1886 row house restaurant named Rick’s is inconspicuously nestled among other residential and commercial buildings. This BYOB neighborhood place is old-style homey with its knotty-pine-paneled decor, and red and white checked tablecloths. There is no hostess there to take your name, you simply jot it down, along with the number of people in your party, on the sign-up sheet fastened to a clipboard on the wall.

It was Saturday night of July 4 weekend and the weather was summer simplicity at its best. In previous visits, we had experienced long waits for a table, where, in a narrow hallway, there is but a small bench to sit on or a boxed radiator to lean against. But as luck would have it, most people seemed to be out of town or enjoying gatherings elsewhere, so we were seated at a spacious front window table within minutes.

Alex Cormier first became Executive Chef in 2000, and what started out as a temporary position turned into a three-year tenure, after which he bought the place in October 2003. Alex enjoys showcasing a spectacular array of fine European and Asian influenced cuisines for specials—added to the chalkboard list daily—while maintaining the integrity of the base Italian menu that has made Rick’s a must-visit destination for over a decade. 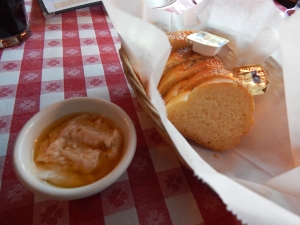 While the main menu is retro, the blackboard specials are well made, particularly flavorful and elevate the place to something more than a spaghetti house. While reading the menu, our friendly waitress brought us a basket of bread with a side of very tasty white bean dip (although the bread was nothing to write home about, in my opinion.) 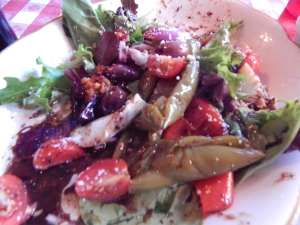 As an appetizer we chose the Antipasto Platter for Two, which is hands down, the best antipasto I have ever had (although the picture was taken after we ravaged the platter and doesn’t look nearly as appetizing as it tasted.) Nicely presented on a large platter, it had a generous serving of roasted peppers, briny olives, pepperocini, stand-out portobellos, red onion slices, grape tomatoes, a creamy goat cheese, and succulent slices of beef on a bed of lettuce greens. 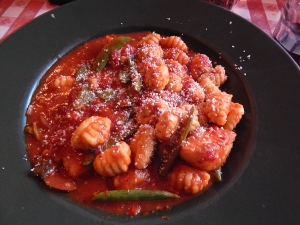 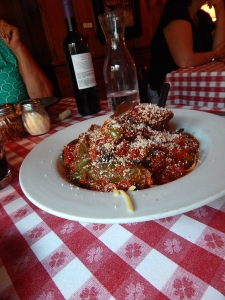 One of the chalkboard specials caught my eye immediately, the Gnocchi Fra Diavolo with Scallops and Sugar Snap Peas with plump, perfectly cooked scallops and tender gnocchi (something I usually never order!) An odd combination to be sure, but I am a sucker for fra diavolo sauce and I adore scallops. Russ also settled on a special, the Brasciole—stuffed with Italian bread crumbs and cheese—Fra Diavolo over Linguine with Roasted Peppers, and he loved it.

Both feeling full half-way through our dinners, we opted to take home doggie bags, which actually was enough for two more dinners a few days later. Not having room for dessert, I have heard others suggest picking the moist and not-too-sweet chocolate chip banana cake or the house-made ice cream, sorbet or tiramisu, which is made with mascarpone and raw eggs.

For a tiny café, Rick’s covers a lot of terrain. They deliver on the promise of Italian and much more!