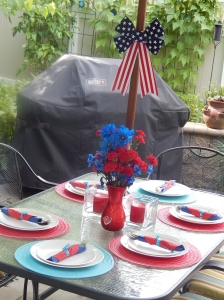 Sometimes an impromptu party works best. The Sunday prior to July 4, while visiting Barb Walsh and Brad Collins, realizing neither couple had made any plans for the upcoming July 4 holiday, we offered to host a BBQ at our house. Several days later when talking with good friend Rosanne Zarrilli who also had no plans for that day, I invited her and husband Gary to join us. 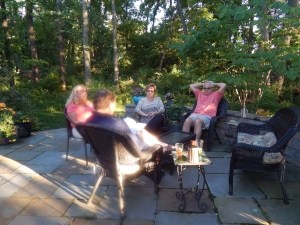 As fate would have it, the first hurricane of the season was roaring up the East Coast, a “never before” happening for that date. But Lady Luck was on our side because by about 4:00 the sun was starting to peak out. And while substantial winds played havoc with the patio umbrella and tablecloth, we were determined to hold the picnic outdoors.

For starters we all enjoyed Lynn’s version of a “Tie-Me-Up, Tie-Me-Down” cocktail. The weekend before I infused some vodka with fresh rosemary from the herb garden and the peel from a whole lemon. Then the morning of the party, I strained the vodka, added simple syrup and the juice from about 8 lemons. Voila, a tasty concoction to kick off the holiday! 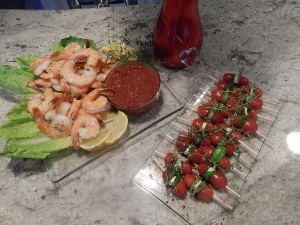 Appetizers from Rosanne consisted of a beautifully plated, and extremely tasty take on shrimp cocktail, ala the Barefoot Contessa, and a platter of lovely little caprese salad skewers. Our pre-dinner conversations were often interrupted by the ear-splitting fireworks from the backyard neighbor’s teenage party but didn’t deter us from enjoying our own raucous laughter! 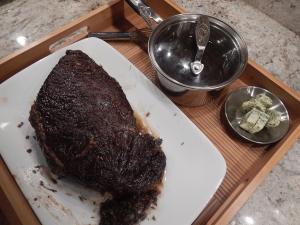 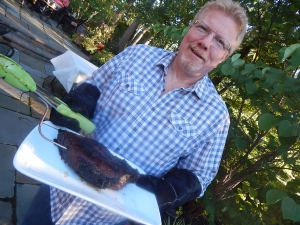 Soon it was time for Chef Russ to fire up the grill for the Marinated London Broil. The very thick, 2/12 lb. steak had been marinating for over 24 hours and actually looked done before it ever met the grill grates! Soon enough the “meat magic” was complete and we all gathered for an al fresco picnic which included contributions from Barb of perfectly composed deviled eggs and a delicious pasta salad; and Rosanne’s broccoli dish. 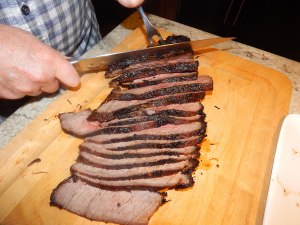 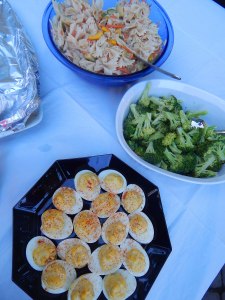 As darkness fell, some enjoyed a choice of several varieties of cheesecake and a scoop of Russ’ homemade strawberry ice cream. Alas, all good things must come to an end, but friendships remain, and I’m sure there are more impromptu parties in our future… 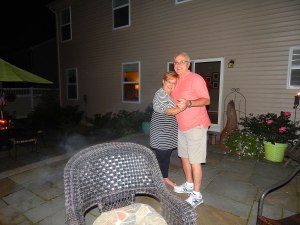 NOTE – Since our steak was very thick, Russ had to grill it much longer than the directions called for, so he inserted a meat thermometer to gauge when to remove it from the heat. We also doubled the marinade.